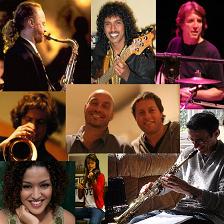 The 25th Street Band is a duo that emerged from London's Jazz Rock/Funk circuit of the 80s and early 90s.  Consisting of guitarist/keyboardist Russ Klinger and keyboard player Dave Radnor, the group has back up a number of popular UK singers, including George Michael.

The key of H