Chazz Dixon is a singer/song writer/actor. He's been performing on stage since the age of 4 and signed his first deal at the age of 17. His velvet high-pitched voice is a blend of sensual R&B with an under tone of soft-core jazz . . . sexual.

During February of 2001 he scored with the number 1 song on MP3's Urban Contemporary Chart (Remember Falling In Love) and R&B Chart.  In Dec 2005 he scored the number 1 spot again. This time on MadHouz Internet radio (Chicago)  with the song "Have We Lost It" from his debut cd on the Da'Soul Recordings label, BACK TO THE GROOVE.  He's formed several groups through the years with an emphasis on vocals. With thehelp of Aki Aleong (former manager of Berry White, Mandrell,
jazz man Norman Conners and Chazz) he began developing his skills. Emmy Award winner Bobby Jay (WCBS- New York/Frankie Lymons Teenagers) and wife Cynthia also lent a helping hand co-managing and producing a very young Chazz.  And if that wasn't enough Harvey Fuqua(song writer/producer former VP Motown Records) stepped in like a big brother and
helped develop the details of his stage persona . . . lights, stage, performance rider, etc. with the big help of another Motown giant, Smokey Robinson, who often allowed Chazz to travel with his band for much needed all around finishing.

In 2004 Chazz was elected vice president of Da'Soul Recordings where he presently serves as senior VP.  His responsibilities include heading graphic arts (cd art, photography, etc...) and signing new acts.  He's assisted producer "J" in the development of projects on a number of Da'Soul acts such as Ricardo, Anita Easterling, Carmen Nickerson, Renee, The Mature Groove Orchestra and Sonny Garr.  Chazz can also be herd on a number of none Da'Soul cds as well.  Everything from the Packer Polka (Eddie J) to jazz man Rick Forkes cds.

In addition to his Da'Soul duties, Chazz continues to travel with his band, a six-piece ensemble of music-ians and singers. The team has performed together both on stage and in the studio for the past 14 yrs.  Proudly, Chazz the actor, has served on several committees in the Chicago local of the Screen Actors Guild.  He's appeared in commercials, film and television.  Chazz is also a published journalist, poet, print model and photographer (he interned with Paramount stills photographer
Charles Ladiscier). 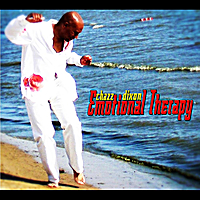