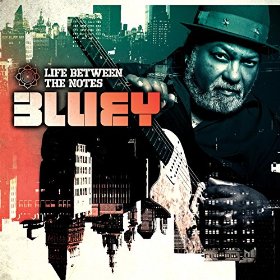 Click on CD cover
to listen or purchase
http://www.amazon.com/gp/product/B00VVYQHIS/ref=as_li_qf_sp_asin_il_tl?ie=UTF8&camp=1789&creative=9325&creativeASIN=B00VVYQHIS&linkCode=as2&tag=soultracks-20&linkId=B3XDJZ2LCUGFGXUP

Closing in on almost forty years in the music industry as the leader of groove masters Incognito and as a successful producer, musician and songwriter, Jean-Paul "Bluey" Maunick has been around the world, back and then some.  Bluey’s long-time musical family, who put jazz funk on the international map, have scored numerous U.K. hits through the nineties, including their version of Stevie Wonder’s “Don’t You Worry ‘bout a Thing,” and hit the top twenty five on the U.S. Dance Club with “Happy People” in 2009.   Apart from Incognito, Bluey’s proven track record - working alongside Wonder, George Benson, Chaka Khan, Leon Ware, Maxi Priest and countless others – has also marked an enduring career in the industry.  But even with all the hard-earned success Bluey deserved through the years, his personal life has taken a back seat in many instances.

With all those frequent flyer miles, lengthy studio time and extensive songwriting experience under his belt, Bluey has molded the triumphs of his celebrated musical journey and the tribulations from the world’s pressing issues into a semi-autobiographical sophomore solo release.  Those frank observations are the main focal point of Life Between the Notes (Shanachie Entertainment.)

While the philosophical Bluey (who handles the lead vocals) on Life Between the Notes delivers various flavors of groove in which he carved a niche with Incognito, he also incorporates a bit more straight ahead jazz, though with a modern twist.   Dubbed ‘the language of my soul,’ the overture entitled “Dance to My Drums” focuses on the pulse of the percussion and bass guitar.  The title track represents classic Incognito with those sweet jazzy grooves and Bluey’s fluttering funk guitar amongst a bed of strings:  “Living life between the notes/Playing my music/Feeding my soul.”  Along the same lines, “Tomorrow Never Lies” digs into those contagious grooves and soulfully thick harmonies, but this time with hard-hitting words of cynicism through life’s unfair hard knocks:  “Here they come the struggling millions/Disenfranchised and the unemployed/Can you blame them/From being paranoid.”  The beats go on as “Hold On,” a song of hope for Bluey during some personal trying times, drops a solid hand-clapping, synth bass-driven house music vibe.  While Bluey’s extremely strong musicality carry most of Life Between the Notes, there are a few stale melodies and orchestrations, such as “I’ve Got A Weakness for Your Love” and “More Than Getting By.”   Thankfully, the notes are more sweet than sour, especially on Life’s delicious jazz gems.

The seventies fusion jazz-tinged, “Saints & Sinners,” on which Bluey teams with former tour mate, keyboardist Dan Goldman (A.K.A. JD73), draws upon the subject of co-existing on this planet through a series of quotes from Joni Mitchell to Roy Ayers.  “Trippin’ on This Feelin’ is an atmospheric Bossa nova about discovering romance.   The Latin sass of “Columbus Avenue” captures the hustle and bustle of Bluey’s experiences in New York City and “Sunships on the Shores of Mars” floats on an engaging samba jazz bed, decorated with pleasing acoustic piano and guitar solos.

Bluey’s overall life perspective throughout Life Between the Notes is well articulated, anchored by his first-rate musicianship, sensitive lead vocals and a firm supporting cast of Incognito alumni including Richard Bull and Matt Cooper.  For a world-class musician who has been there and done that personally and professionally, Bluey nails all the essentials, making Life Between the Notes an even more intriguing listening pleasure.   Solidly Recommended.