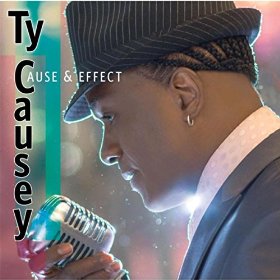 Click on CD cover
to listen or purchase
http://www.amazon.com/gp/product/B00VPUD2YU/ref=as_li_qf_sp_asin_il_tl?ie=UTF8&camp=1789&creative=9325&creativeASIN=B00VPUD2YU&linkCode=as2&tag=soultracks-20&linkId=MLK2Z6MVSERDALGW

Ty Causey is among the hardest working people in the independent soul music business, and considering the grind-or-die ethos that permeates this subset of the industry, that’s saying something. Causey’s base of operations is Fort Wayne, Indiana, a place that is far from being Mayberry but isn’t exactly the epicenter of the music business. Yet, he’s managed to turn out a series of ultra-smooth R&B albums that have a connection to the music that guys such as Glenn Jones – a vocalist to whom Causey is sonically comparable – were releasing in the late 1980s and 90s, a time before a different rougher-edged type of urban singer emerged.

A place remains for Ty Causey in today’s R&B market regardless of whether he ever snags a record deal with a major label. Causey has released 10 albums, including Cause & Effect, his latest, and he tours constantly. Neither of those things happen if there aren’t a whole bunch of people who already like Causey’s product or gravitate to his music upon hearing it for the first time.

Causey delivers for listeners in both categories with Cause & Effect. He is not an artist who deviates from the formula that has proven to be successful. That formula includes percussion both of the acoustic and programmed variety, jazz inflections from a saxophone player (on this album Igor Gerzina holds down the spot that in the past was occupied by Najee), memorable hooks, and Causey’s distinctive, rangy baritone on the lead and backing vocals.

The tunes on Cause & Effect are a balance of mid-tempo tracks geared toward steppers, jazz fused ballads and up-tempo numbers. Causey’s recent efforts served as a platform for the artist to display refinements that he has made as a songwriter, and he continues to show strength as a crafter of the adult-oriented lyric.

Songs such as “Missin You” bring the elements of jazzy piano flourishes, a funky mid-tempo bass line and lyrics that tell the narrative of a man who realized too late that he may have allowed a good thing to escape: “It feels like rain inside my heart/Like a river trying to find its way to you.”

Causey slows the pace down while giving listeners some driving thumping bass to go with the rapturous praise that he heaps on his woman “So Beautiful,” and he deploys that same driving bass and combines it with some bluesy guitar licks on the funky “Don’t You Judge Me” – a track that finds him telling a lady that the fact that they don’t connect doesn't make him a bad person.

The ballad “Just Another Love Affair” introduces the narrative of the post mortem to infidelity with chimes, a percussive bass line, and blues riffs on the guitar, before Causey goes into the conversational mode as he tries to explain why he must break things off with a woman with whom he has been unfaithful. He sets the stage with an opening lyric that shows how quickly that is seemingly innocent can get out of control: “Looks like another love affair/Cuz I can feel it in the air/How did it come to this/We never should have took the chance/I lost my girl you lost your man/All it took was a simple kiss.”

As an adult oriented independent singer, Causey operates within the constraints of a system that has a tunnel vision focus on appealing to youth and seems intent on pretending that independent soul artists don’t exist. Consequently, he depends on his intensely loyal fans to evangelize on his behalf, and with Cause & Effect, Ty Causey has provided them with a soulful conversation piece at family gatherings. Recommended.