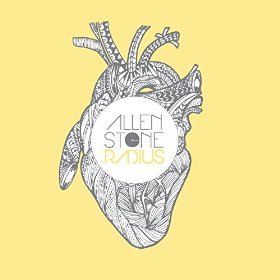 Click on CD cover
to listen or purchase
http://www.amazon.com/gp/product/B00VBZ6BB0/ref=as_li_qf_sp_asin_il_tl?ie=UTF8&camp=1789&creative=9325&creativeASIN=B00VBZ6BB0&linkCode=as2&tag=soultracks-20&linkId=LOGAI4DWX3HYAPRU

Blue-eyed soulster Allen Stone goes from strength to strength on his second commercial LP and fourth overall recording release in the last seven years. With strong lyricism on relationship ballads like “Circle” to powerful progressivism in political songs like “American Privilege,” Stone illustrates why he has broken out ahead of a very crowded pack of sound-a-like blue-eyed soul singers who approximate rather than realize an original sound.

The man made famous from his Occupy Wall Street Movement anthem, “Unaware,” will keep early fans happily tapping their toes to these righteous tunes and swaying with emotional understanding to Stone’s optimistic take on love. With Stone's Capitol Records major label debut, following his ATO Records departure, Radius hasn’t a single sophomore jinx to worry about.

The first ‘80s throwback single, “Upside,” already harkened a different direction from Stone’s self-titled 2011 debut, one more rock and funk infused on thrilling jams like “Freezer Burn.” As is usual with more major label fare, there is a bit more pop to be found than on previous more indie Stone outings, as with the peppy and radio-friendly “Love” and “Where You’re At.” But, the upbeat lyricism isn’t off-brand for Stone whose shining feel-good spirit has always been a welcome juxtaposition to his more biting message music. “Where You’re At” has the most potential legs to be picked up by AAA radio and takeoff, since it’s the kind of bright song that literally anyone can sing along to with a Coke and a smile.

When he isn’t making us grin, Stone’s making us think or echoing the feel of these troubled times. The “I’m so tired” refrain on “The Wire” and “I’m looking for freedom” on “Freedom” couldn’t come at a more appropriate time, given the inflammatory climate of constant protests over one injustice after another. Stone positions himself as the perfect ally to progressive people of color movements on a cut like “American Privilege,” where he acknowledges and lists out the effects of his unearned white privilege. The hand-clapping field song jamboree, “Perfect World,” is almost a liberal manifesto writ large. It’s an extension of work Stone was doing back in 2009 with Last To Speak, long before political songs were back in vogue, when Allen Stone appeared just a hippie vagabond soulfully singing on YouTube to eventual, and most unexpected, fame.

Not everything on Radius passes the infectiousness test. As with Allen Stone, there is filler to be found, like “Symmetrical” and the self-righteous damnation of our simulated techno life in “Fake Future,” a cut that may be lyrically compelling and even true in its points, but lacks the melodic and musical grip that Stone had readily been proven capable of delivering. Sometimes Stone’s trademark preachy sweetness can get cloying, if not creepy, as with the edgy pop rock of “Guardian Angel,” a cut about dead loved ones watching us misbehave. However, these head-scratching moments are not plentiful and don’t detract from the overall enjoyment of Radius.

Interestingly, Stone’s succulent R&B groove, the D’Angeloesque “Millions,” didn’t make the cut for Radius, which is a shame for those who missed the 2014 single. One can only surmise that “Millions” was purposely left off of this collection because for once there aren’t any easy comparisons to be drawn to Stevie Wonder or D’Angelo or any particular black artist on Radius. And yet, in its rock and funk soul pop, Radius may represent the most soulfully original music of Stone’s career, if only because it is so undeniably his own take on the Black American Music and folk traditions he’s so clearly long admired. Allen Stone has found his place in the world and a purpose we can (mostly) all sing along to. Highly Recommended.