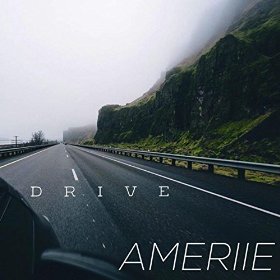 How bad must you sing that in the age of auto-tune and pitch correction you’re still flatter than French crepes? Sing about it? I’m losing it? Two often the titles and hooks on Ameriie’s (formerly Amerie) Drive EP are either unintentionally ironic or direct commentaries on the urban pop singer’s vocal abilities or ailing career. To reference “The Trouble With Love,” the trouble with Ameriie’s new EP isn’t the slick productions or even the solid but unexceptional writing. The trouble is the too frequently out of tune belting that makes one contemplate abusing stereo equipment and soundbars with the verve and fervor of a parent whose first born has been assaulted by strangers. The sixth official project release is the third in a stunning reversal of fortune beginning since 2007’s Because I Love It. Listening to the Drive is tear-inducing when one considers that Ameriie was once briefly considered to be a real contender for the international urban pop diva mantle on the level of a Rihanna or at least a Jennifer Lopez. Seriously. She was almost a thing. I promise.

The oft-strained vocals on Drive makes one wonder exactly what production craft Rich Harrison (Beyoncé, Mary J. Blige, Toni Braxton) was able to pull off to make All I Have one of the most sultry and sexy albums to come out in 2002. While the R&B and dance hit “Why Don’t We Fall In Love” will always sound like a song that started in the middle of the track, it put both the Washington, DC singer and hitmaker producer on the map. It helped that the Harrison written and produced album backing the track was nothing short of a total earworm, even if its instant star was never once thought of as the next Whitney. But, in 2002, no one cared if you had serious pipes if the beat was hot, and Harrison, who’d go on to produce Beyoncé’s “Crazy in Love,” was on fire. Amerie went on to win the Soul Train Award’s Best New Artist Award in 2003 and was nominated for BET and Image Awards. Following such international hits as “1 Thing” (Peak: #1 R&B/#8 Pop) and back-to-back gold albums with All I Have and Touch, Ameriie seemed primed for urban pop greatness.

There were hints of what was to come with Touch, with Ameriie taking on a greater role behind the scenes as a co-writer. But, with everyone from Harrison and Lil Jon to Dre & Vidal and Bryce Wilson behind the boards, no one was really checking for the writing. And, with The Meter’s 1970 funk of “Oh, Calcutta” sample driving “1 Thing” and the album that spawned it to two Grammy nods, few cared if Touch was woefully uneven compared to the midnight oil consistency of All I Have. Despite the fact that Touch’s even artistically weaker follow-up, Because I Love It, made some noise in the UK in 2007, thanks to the album’s second single, “Gotta Work,” Columbia knew it had a turkey on its hands. The major that had birthed Amerie didn’t invest in promoting the album or even releasing it stateside, choosing instead to drop Amerie on the firehouse doorstep. Notably, the album was absent Harrison and his ability to make listeners believe Ameriie could carry a tune, subsequent projects and mixtapes like Love & War would completely disabuse us of that notion.

Which leads us to Drive, a new EP that has a few songs worthy of attention if only sung by someone else, someone with…you know…abilities. The previously mentioned “Trouble With Love” produced by Mike City comes the closest to the bangers that made Ameriie someone listeners actually checked for, with a sing-a-long lyric, engaging melody, and a catchy hook. The vocals leave something to be desired, but everything else works so well, you want to forgive its sole indiscretion. The percussion work on The Buchanans’ “Sing About It” recall the famous basslines of Harrison that have become something of a signature for Ameriie and would be masterful if cut on another aggressive soprano. On “Out Loud,” Harrison himself makes an appearance in a dystopic production with a darker, more updated version of his infectious percussion style, but the song’s key is placed at the upper part of Ameriie’s reportedly “three-octave” register and never seems easy or fluid on the leads, though she does admittedly sublime work on the layered background vocals.

The remainder of the project with forgettable cuts like the Focus… produced “Every Time (feat. Fabolous)” attempt to reclaim the sounds and melodies from the first two now storied albums, but either they are missing a special sauce or too much time has passed since that sound could capture and maintain listener attention. Early 2000s retro as an approach could work, but I think the horsemeat I’ve bludgeoned is now canned food; so there’s no need to say again why it doesn’t. (“Psst! Because Ameriie”). Not Recommended.