Cheryl Lynn - Got to Be Real - The Columbia Anthology 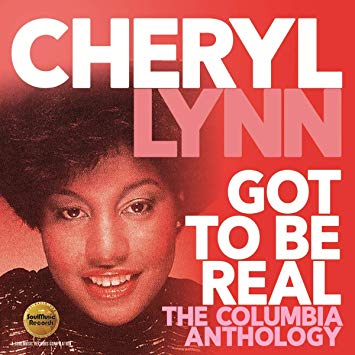 Cheryl Lynn - Got to Be Real: The Columbia Anthology

It’s been 30 years since Cheryl Lynn released any new music in the United States—three times as long as her run of releases spanning her 1978 out-of-the-box classic “Got to Be Real” to her last U.S. chart entries from 1989’s Whatever It Takes. Although a few collections of her output have surfaced in the decades since, SoulMusic Records’ new two-disc assemblage (like its chief predecessor, also entitled Got to Be Real) is the first to truly dive deep into her prime catalog of both defining hits and noteworthy album tracks.

Cheryl Lynn - Got to Be Real: The Columbia Anthology

It’s been 30 years since Cheryl Lynn released any new music in the United States—three times as long as her run of releases spanning her 1978 out-of-the-box classic “Got to Be Real” to her last U.S. chart entries from 1989’s Whatever It Takes. Although a few collections of her output have surfaced in the decades since, SoulMusic Records’ new two-disc assemblage (like its chief predecessor, also entitled Got to Be Real) is the first to truly dive deep into her prime catalog of both defining hits and noteworthy album tracks.

The set’s first disc opens with not a Cheryl Lynn solo number, but a funky track by soulful and then-new, Los Angeles-based AOR/pop outfit Toto, “Georgy Porgy.” Lynn’s subtly riveting delivery of the chorus played a significant role in propelling the track to the top 20 of the American R&B charts. While it barely reached the top half of the pop listings, in subsequent years it’s become one of the group’s most defining tunes. Though it seems odd to open the anthology with a cut on which her role is not the leading one, it makes sense in the musical context of the subsequent selections from her own debut album—produced by Toto’s David and Marty Paich. There’s a certain fiery dynamic that ensues on these songs, their production bearing a tight cohesion of funky bass lines and rocking guitar work bolstered by Lynn’s avidly inducing vocal performances.

While sunny horns punctuate Lynn’s soaring delivery on “Got to Be Real,” they glide alongside her on the soaring disco romp, “Star Love,” an often unfairly forgotten gem embodied with a standout rhythm section and her nature-defying octave exploration. Another highlight of these sessions is “Come in from the Rain.” Resting comfortably at a slower tempo, it sways with reggae undertones as Lynn issues a soothing invitation to a forlorn friend. Earlier recordings of this tune by Diana Ross and Melissa Manchester might be better known, but they don’t leave the sort of striking impressions that Lynn imbues her reading with so effervescently.

Lynn suffered the dreaded sophomore slump with 1979’s In Love. Though in hindsight this can largely be attributed to the different production sensibilities of Barry Blue, which don’t stand up strongly to those of the Paich brothers, a saving moment is found in the Bobby Caldwell-penned “I’ve Got Faith in You.” Here, the festive essence of “Got to Be Real” is summoned to some degree, with Lynn providing both an animated lead and appealingly tranquil backgrounds.

Ray Parker, Jr., helped Lynn get her groove back with 1981’s In the Night, most notably boasting the Michael and Brenda Sutton-written “Shake It up Tonight,” a smooth and funky bustler nicely bridging the gap between straight-up disco and dance-laden R&B. And while the sultry, Parker-composed title cut from that album barely scraped the charts, it’s just as appealing and relevant. Meanwhile, Lynn and Parker’s co-write, “If You’ll Be True to Me,” is one of a handful of selections throughout the anthology which demonstrate her knack for crafting melodies and lyrics ideally suited to her vocal range and style.

Disc two of Got to Be Real covers the second half of Lynn’s Columbia repertoire, culling tunes from 1982’s Instant Love, 1983’s Preppie, and 1985’s It’s Gonna Be Right, in addition to a pair of soundtrack entries. Instant Love was produced by Luther Vandross, who requested to work with Lynn shortly after his success helming Aretha Franklin’s comeback hit, “Jump to It.” The unmistakable peak of the resulting sessions, a cover of Marvin Gaye and Tammi Terrell’s “If This World Were Mine” (performed with Vandross), quickly became a staple of Lynn’s catalog. The lush, symphonic musical setting of the remake, arranged by Nat Adderley, Jr., gently surrounds the pair’s heartfelt interchange, which reached the R&B top five in October of ’82. While only a B-side, equally enchanting is the reflective ballad “Day After Day,” penned by Tawatha Agee of Mtume.

Though Preppie got off to a slow commercial start, the set wound up producing Lynn’s second #1 single on the American R&B charts. The Jimmy Jam and Terry Lewis-produced “Encore” hit at just the right time, fueling sonically off the duo’s career-reviving work with The S.O.S. Band (“Just Be Good to Me”), while foreshadowing the progressive synth-funk work they’d go on to with the likes of Cherrelle and Janet Jackson. In this soundscape, Lynn strikes a cursive balance of understatement and vivacity. She self-produced the remaining singles from Preppie, for the most part effectively. While the admirably adventurous new wave lean of the title cut went over the heads many fans, it is but a firm example of her musical versatility.

Most affectingly, the earnest “This Time” (co-penned by Lynn’s longtime manager, Thurlene Johnson) is a lovely slice of mid-‘80s balladry highlighted by passionate vocals and enveloping layers of synth keyboards. There are a few album cuts from this period that lack a bit of the zing one would expect, such as “Change the Channel.” But 1985’s “Fidelity” lies somewhere in between. A Jam and Lewis production clearly designed as a quasi-sequel to “Encore,” it lures with its clever hook and lyrics (and Lynn’s both serious and tongue-in-cheek dialogue), but falls a tad short in trying intently to keep the same rhythmic structure as its predecessor. More resounding is the atmospheric, midtempo follow-up, “Fade to Black.” Herein, Lynn’s disappointment with a dried up love affair is relayed with nuanced yet assertive vocal decorum, which steers the ship of her astute production with fitting candor.

As 1987’s “If You Were Mine” and 1989’s “Everytime I Try to Say Goodbye” were recorded for another label, they’re not included on Got to Be Real. With 31 tracks covering ninety percent of Lynn’s hit singles, however, it’s hard to feel shortchanged upon listening from start to finish. Aside from the many aforementioned high-caliber songs, the inclusion of a gem which rarely comes to light, “Goodbye for Now,” makes the collection even more worthwhile. The Stephen Sondheim-composed theme from the 1981 dramatic film Reds would go on to be recorded by Barbra Streisand more than 20 years later. Lynn’s strong but sensitive treatment of the lyric, coupled with flautist Hubert Laws’ indelible rendering of the sorrowful melodies, make for a real time piece.

With only a few minor misses that don’t capitalize fully on her wide-ranging talent, Got to Be Real - The Columbia Anthology is an all-round fulfilling two-and-a-half hours’ worth of cream-of-the-crop Cheryl Lynn. Highly recommended.