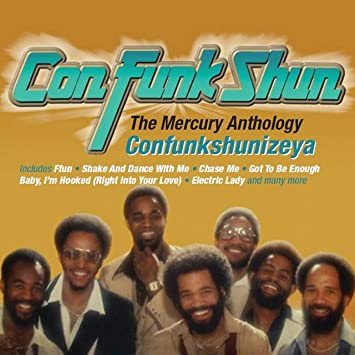 Click on CD cover
to listen or purchase
https://www.amazon.com/gp/product/B08JDXBRVG/ref=as_li_qf_asin_il_tl?ie=UTF8&tag=soultracks-20&creative=9325&linkCode=as2&creativeASIN=B08JDXBRVG&linkId=374ba07ebd42df52e8e9e7a785e2e13c

Once upon a time, major-label R&B stars could consistently release albums without having to hit the commercial jackpot on every occasion. Both artistic integrity and prolific output were afforded to authentic acts such as the San Francisco Bay Area’s Con Funk Shun. From 1976 to 1986, the smoothly funky septet released 11 LP’s and landed 25 singles on the American R&B charts.

Once upon a time, major-label R&B stars could consistently release albums without having to hit the commercial jackpot on every occasion. Both artistic integrity and prolific output were afforded to authentic acts such as the San Francisco Bay Area’s Con Funk Shun. From 1976 to 1986, the smoothly funky septet released 11 LP’s and landed 25 singles on the American R&B charts.

Like their Midwestern contemporaries The Dazz Band, Con Funk Shun made a lasting impression by combining a tight, driving instrumental sound with an equally stylish vocal blend. While guitarist and lead vocalist Michael Cooper’s energetically enunciated performances are frequently first to spring to mind upon seeing the band’s trademark logo, the fluid lead spots by keyboardist/guitarist Felton C. Pilate, II also played an integral role in establishing the outfit’s fundamental style. All the while, the rhythmic and melodic components of Con Funk Shun’s playing showcased intricate yet often laid back dynamics markedly contrasting in tone to many of their peers’ harder-hitting approaches.

Robinsongs’ new two-disc, 32-track set, Confunkshunizeya — The Mercury Anthology, is an affirmative collection of not only the group’s biggest hits, but, too, of lower-charting singles and choice album cuts that have stood the test of time. Perhaps more so than any other self-contained funk band of its era, Con Funk Shun made just as much of an impact with balladry as with floor-fillers. Take 1979’s “(Let Me Put) Love on Your Mind.” The shining slow-jam’s pensive lyrics, striking electric-guitar melodic parallels to Michael Cooper’s hearty falsetto and majestic sweeps of strings are every bit as timelessly fulfilling as that year’s anthemic “Chase Me,” a swaying and chugging number with alternatingly sweet and mighty vocal chants, wicked percussion embellishments, snaky guitar riffs, and bright horn jabs.

Even as Con Funk Shun eased into the changing trends of ‘80s R&B, they maintained their dynamic strongholds and compositional righteousness. 1982’s “Love’s Train,” an enrapturing plea for satisfying amorous desire, boasts an utterly alluring keyboard arrangement that serves as a flawless springboard for the wide vocal range of softly seductive, churchy belting and conversational harmonies. This ultimate midnight groove is nearly matched by 1981’s “Straight from the Heart,” an endearingly arranged ballad with crisp, sweet harmonizing and a lush potion of subtle guitar work and majestic string progressions serenading the verses.

1978’s romantic shuffler “Loveshine,” meanwhile, is a compelling example of Con Funk Shun’s aptitude for merging a funk-filled groove with a dreamy melodic construct—resultingly, commensurately effective as both a dancer and the soundtrack for a leisurely listening session. Subsequently, 1981’s “California 1” stretched genre parameters, melding a Latin-tinged backbone with light pop and rock overtones complementing Pilate’s smooth-sailing delivery of the poetic words. Skip Scarborough, fresh from his success writing hit tunes for Earth, Wind & Fire and Friends of Distinction, handled production chores on the Loveshine album (in addition to the title cut, including the vibrant, top-five shuffler, “Shake and Dance with Me”); the band itself helmed the Con Funk Shun 7 LP from which “California 1” is lifted (not to mention the sparkling top-20 mover “Bad Lady” and the synth-savvy “Body Lovers”).

As for Con Funk Shun’s most impactful hits—aside from several aforementioned gems, full-length versions of 1977’s #1 “Ffun,” 1980’s “Got to Be Enough,” 1981’s “Too Tight,” and 1983’s “Baby I’m Hooked (Right into Your Love)” (all top-ten hits) also feature on the Confunkshunizeya anthology. Even, however, those releases which barely scraped the charts—the percolating “Happy Face,” the bubbly and disco-infused “Da Lady”—further amplify the spotless vocal blends and musical proficiency of the band. A couple of later tunes, like the rap-driven “Electric Lady” and programming-heavy “Turn the Music Up,” miss the mark a tad (the set’s one glaring omission is the classic ballad from the Electric Lady LP, “I’m Leaving Baby”). Yet, for a group that recorded some one-hundred songs over a decade, a remarkably small amount of their harvest could come close to being passed off as merely filler.

Confunkshunizeya provides a thorough and riveting selection of Con Funk Shun’s body of work for Mercury Records from the dawn of the disco era to the burgeoning prominence of electro-soul. Through it all, the band maintained an enviable core of no-frills funk and straight-no-chaser ballads marked by authentic performances emanating technical prowess, high style, and classy soul. Recommended.