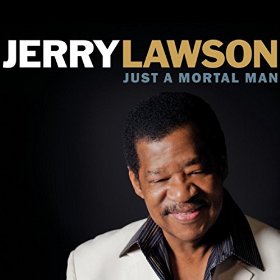 Click on CD cover
to listen or purchase
http://jerrylawson.biz/just-a-mortal-man/

Long before there was Chris Borland or Patrick Willis or Jason Worilds, Jerry Lawson could tell you a thing or two about the risks that came with playing American tackle football. The Florida native who grew up singing in church and listening to R&B and pop singers on the jukebox in his uncle’s night club, moved to Philadelphia and then New York in hopes of finding stardom in the music business.

Lawson came to the Big Apple to sing, and a vocal group with which he sang actually won the talent contest at the Apollo, but he had other talents. Lawson played wide receiver for a semi-pro football team and had drawn the attention of the New York Jets. If Lawson had stuck with football he could have caught passes from Joe Namath, and he definitely would have been an upgrade over whomever the team used as lead singer for the singing group the Jets formed after they won Super Bowl III. But Lawson went across the middle in an era when talking about concussion protocols and unprotected wide receivers would have gotten a player laughed out the league, and he made what players call “a business decision”: Singing with the a cappella group The Persuasions might just be a better career option. “I’m gonna sing. I said to myself. You can’t get hurt singing.”

Football’s loss has been vocal music’s gain. The Persuasions became a soul music staple of the 70s and beyond; never achieving broad stardom, but amassing a passionate audience – including stars like Frank Zappa – and resurrecting and then redefining a cappella music. The band reimagined the music of singer-songwriters such as Bob Dylan, bands such as The Grateful Dead and Zappa. If you want to hear The Persuasions in all of their power, grab a copy of their Grateful Dead tribute, Persuasions of the Dead.

Lawson left the Persuasions a decade ago and joined another vocal ensemble, Talk of the Town, and that group managed to make it onto the television program The Sing Off. So more than four decades after he started singing on street corners in Brooklyn, Lawson still had it.

As he reached his 70th birthday, what Lawson really wanted to do was record a solo album while backed by musicians, and he receives his chance with the release of his much delayed solo debut, Just a Mortal Man -- and he’s still got it. The album features Lawson doing his interpretation of pop, southern soul, country and R&B songs made famous by artists ranging from Paul Simon to Ayo.

Actually, his rendition of Ayo’s “Down On My Knees” has been around for a while. I saw him perform that tune on YouTube about five or six years ago, and the one thing we learn from that performance, as well as the others on this record, is that years of being a member of a vocal ensemble that featured a group of strong and distinct voices taught Lawson how to work in harmony with other players. After all, the voice is simply another instrument.

Lawson can bring a conversational and intimate style to a number such as “I’ll Come Running To You,” a gospel infused number that finds  him backed by an acoustic guitar and background singers who add accents to the chorus. He brings a trace of jazz and gospel to “Down On My Knees,” and actually the soft rasp in his baritone endows the track with a convergence of masculinity and vulnerability.

The ease in which he slides into the blues/rock of “Never Been to Memphis” will prompt the listener to wonder if Lawson had really never performed with a band. However, that and the rest of the output on Just a Mortal Man marks Lawson as the consummate professional who is adept at using a vocal instrument that he has taken great care of over the course of five plus decades.

Guess you can say that, a half century into his music career, Lawson proves that there is life after football. Now, if only Maurice Jones Drew can carry a tune as well as he carried a football... Solidly Recommended.