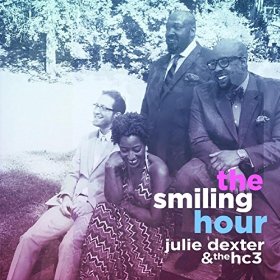 You want to love it, because it’s Julie Dexter. I mean, come on, it’s Julie Dexter, one of the pioneering British sisters of independent soul and Afro Jazz music. And yet, throughout the eleven tracks of pleasant and utterly unmemorable material there is a dawning realization that the moment of sublime bliss for which you’re awaiting just isn’t going to happen. No surprising arrangements, no stunning phrasing, no chill sliding down your spine from that moment that rings both true and felt from the soles of your feet. It’s all just so…so…pedestrian. And, in Julie Dexter’s twelve years of album releases, that’s a word that had never applied…until now.

Don’t get me wrong; The Smiling Hour is easy on the ear and fairly note perfect in a technical sense. Everyone is a professional here. How could it not go down smooth with one well known standard after the other reminding us of all the most requested songs ever played from the Fake Book by any jazz trio at any wedding, reception, or neighborhood jazz joint? The supper club readings of Hoagy Carmichael’s “The Nearness of You” and Duke Ellington’s playful reimagining of George Gershwin’s “I Got Rhythm” on his “Cotton Tail” are sweet and lightly engaging. Resisting the urge to roll one’s eyes at what must be the most oft-covered jazz standard of this musician generation, Mongo Santamaría’s “Afro Blue,” is difficult when this collective brings nothing fresh to a tune better interpreted more recently by everyone from José James and Erykah Badu to Cleveland P. Jones with Ahmed Sirour. “Good Morning Heartache” may be a close runner-up for recent covers (*waves to Jill Scott, Rebecca Ferguson, Gloria Estefan, and Cassandra Wilson*), but at least the upright bass and spare piano approach attempts a different, if sometimes awkward approach. The jazz take on “People Make The World Go ‘round” unwittingly invites comparison to Lalah Hathaway and Marcus Miller’s epic jazz triumph and just feels ho-hum in its pale, straight-ahead take.

A song like Joseph Scott’s 1954 blues ballad “Never Let Me Go” fares better if only because it is utterly impossible to ruin this classic as long as the singer is sincere, and here Dexter’s feathery and heartfelt vocal is an appropriate seduction. It’s fitting that Dexter excels at songs made famous by Nancy Wilson (Wilson’s take of “Never Let Me Go” is near peerless), as she does with thehc3’s Old World take on the 1961 Nancy Wilson and Cannonball Adderley jam, “Old Country.” The song stands out for its tongue-in-cheek sense of humor and the band’s enthusiastic fun while playing it. You wish Henry C. Conerway, III, Kevin Smith, and Nick Rosen of thehc3 trio brought that same verve and good humor to Sarah Vaughn’s Brazilian classic, “The Smiling Hour.” Sadly, they did not.

Though its selected tempo lacks fire, Wayne Shorter’s “Black Nile” does swing and is one of the few times we hear Dexter demonstrate her competent scatting skills. It’s kind of indicative of the work as a whole of The Smiling Hour, smooth and pleasant enough if you are new to this kind of classic American Songbook material and straight-ahead jazz, but for aficionados there is little special enough to warrant such a spotlight recording. And that is probably the most difficult and emotionally devastating things a fan can say about a Julie Dexter performance. Until next time, there’s always the amazing guest spot on The DangerFeel Newbies “Gotta Live My Life” from last year’s Hariet and a back catalog of an artist with far more daring and wonder than what's displayed here. Mildly Recommended.