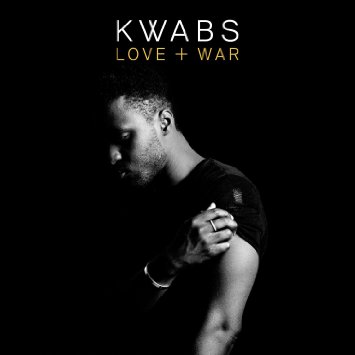 Click on CD cover
to listen or purchase
https://www.amazon.com/Love-War-Kwabs/dp/B01AX8C6YG/ref=as_sl_pc_tf_til?tag=soultracks-20&linkCode=w00&linkId=QUVBOEQ4ASDFIGOQ&creativeASIN=B01AX8C6YG

The urban alternative wing of R&B/soul may finally have its answer to Sting. With naked songs written in blood beating poetic verse that takes on weighty philosophical and personal themes with cloaking metaphors, every song is sung with unmitigated power, clean, precise lines, and soaring climaxes that rattle the woodwork. Save his UK colleague, Laura Mvula, there is almost no one else in the Black music landscape who so effortlessly merges the classically trained Negro spiritual voice with modern-day Western pop conventions and the gritty basslines of ‘90s-era urban street sounds better than Kwabena Adjepong aka Kwabs.

The urban alternative wing of R&B/soul may finally have its answer to Sting. With naked songs written in blood beating poetic verse that takes on weighty philosophical and personal themes cloaking metaphors, every song is sung with unmitigated power, clean, precise lines, and soaring climaxes that rattle the woodwork. Save his UK colleague, Laura Mvula, there is almost no one else in the Black music landscape who so effortlessly merges the classically trained Negro spiritual voice with modern-day Western pop conventions and the gritty basslines of '90s-era urban street sounds better than Kwabena Adjepong aka Kwabs.

In truth, there are so few whose hybrid music proves this successful in its execution and ability to pull from so many different influences, critics have struggled to name Kwabs’ sound. Following a string of audience cultivating EPs and a couple of bonafide international hits, Kwabs’ debut album is a tour de force with very few missteps, meeting almost every expectation. And, there is a lot of expectation accrued over some three years of fan cultivation via YouTube, grassroots touring, featured guest spots, and finally a major label record deal with Atlantic Records UK. Incidentally, that little deal led to the platinum and gold hit marching across several countries, “Walk,” one of the least of several smashes-in-waiting here.

Born in Ghana and reared in South London, Kwabs was the lead singer for three years in the National Youth Jazz Orchestra and studied jazz at the Royal Academy of Music. But, it was his earth-shattering performance of “Sometimes I Feel Like A Motherless Child” in 2011 at Buckingham Palace that went viral and first broke Kwabs through to the public’s attention. A string of cover performances of artists from James Blake to Corrine Bailey Rae as well as acoustic versions of originals that would eventually land on all of Kwabs’ EPs, each one besting the other, that made him an underground sensation on both sides of the pond and a critical darling of music blogs and websites, including this one.

Signing with Atlantic Records UK, the rollout of Kwabs has been one of the most strategic and consistent in ways that artists like Luke James and Hal Linton would envy. A steady stream of EPs, Wrong or Right, Pray for Love, and Walk, hit like clockwork almost every four to six months, culminating with the release of Kwabs full-length major label album, Love + War. The album received an unexpected boost by a feature guest spot on the forthcoming hotly anticipated Disclosure sophomore LP with the charting “Willing & Able.” The album also benefits from a lead up of no less than seven “official videos” that have found a collective audience in the millions, including the 81 million views and counting for “Walk.”

While the album misses some expected cuts that had become video hits, like “Saved,” “The Wilhelm Scream (a James Blake cover),” and “So (with Todd Oliver)” (the latter criminally so), and struggles with the overdone production for the formerly acoustic “Layback,” Kwabs Love + War is near perfect. For collectors of all things Kwabs, there are new songs that have not made it to any previous EPs, including the emotionally devastating “Cheating On Me,” a minimalist piano ballad that characterizes the strength of Kwabs’ sable baritone laid bare in a song that hints at both traditional gospel and the blues. Another original, “Father Figure,” is as far removed from the George Michael classic of the same name, though its bright, synthy production could have come from the same era. Another sunspot comes in the infectious hip hop soul production of the possessive declaration, “My Own,” which has the feel of early Timbaland mixed with the post-New Edition debut of a young Johnny Gill. Its “no other love” sticks in the ear even as the bumping bass will make you want to resurrect those cardio heavy dance moves from the ‘90s.

A fitting companion piece to the here-omitted “Brother” from the Pray for Love EP comes in the haunting evocations of “Forgiven.” The cut echoes slave ships with a moaning harmony that carries Kwabs' theatrical testimonies against different percussive elements that move from brooding accents, tribal synth drums, to big rumbling choral booms. SOHN’s similarly dark-toned, moody track that serves as something of an ominous karmic warning comes in “Look Over Your Shoulder,” a cut that has traces of Rockwell’s “Somebody’s Watching Me” and The Police’s more direct “Every Breath You Take,” while Kwabs’ inference heavy, metaphoric approach couldn’t be more different. Switching gears from the shadow world is a total embrace of danceable 1990s New Jack Swing, “Make You Mine,” which might be the most straight-ahead R&B jam to be found on a project that adroitly transitions from emotional centerpieces to dance jamborees with ease, neither side taking their eyes off the glue that holds it all together: Kwabs’ unwaveringly sure voice.

Songs like the relationship eulogy of producer George Moore’s “Perfect Ruin” and driving shelter offering of “Wrong or Right,” already featured on previous EPs, are well sequenced here in their placement, coming to greet fans like old friends. The chastising plea embedded in the peppy soul pop of “Fight For Love” never sounded so good, sandwiched between the radio-friendly “Walk” and the epic “Love + War,” a trifecta of conventional pop that still has Kwabs’ edge. One may never understand the decision to overdress the seductive invitational, “Layback,” as a mid-tempo neo-soul groove, but when newcomers like the anthemic “Love + War” are there to dazzle you with big choral and rock infused distractions, you soon find that any youthful indiscretions are quickly forgiven and forgotten. Almost.

Quietly, with the help of effective collaborators like co-writing producers SOHN and George Moore, Kwabs has developed such a solid body of work that you miss the inclusion of such emotional sucker punches as “Last Stand” and runaway grooves like “Into You,” but the art of leaving you wanting more has long been a lost one. Glad that its return comes in the form of this unassumingly slim, open-faced bloke from South London with the smoke-filled voice and seriously intimate pen that has mastered that art for a new generation. Much like the music from that other jazz trained, slim and sensitive ska meets pop rock musician from the UK, I certainly can’t wait to hear what this astonishing talent has for us next. Highly Recommended.