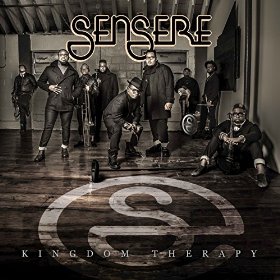 Click on CD cover
to listen or purchase
http://www.amazon.com/gp/product/B00WBHC4EK/ref=as_li_qf_sp_asin_il_tl?ie=UTF8&camp=1789&creative=9325&creativeASIN=B00WBHC4EK&linkCode=as2&tag=soultracks-20&linkId=ZZPX4E6RN4RRMF37

The Soul of Future Worship, Vol. 1 is the name of the critically acclaimed debut by the nine-piece South Floridian band of male vocalists and musicians comprising the gospel soul act Sensere. More than a declarative title, the name has also served as a tagline for the group’s sound and artistic mission.

The Soul of Future Worship, Vol. 1 is the name of the critically acclaimed debut by the nine-piece South Floridian band of male vocalists and musicians comprising the gospel soul act Sensere. More than a declarative title, the name has also served as a tagline for the group’s sound and artistic mission.

Fans who have heard the band’s 2011 hit single, “Got Jesus,” or their more recent radio single, “Love,” already know their signature is more the “Soul of R&B Past” than anything futuristic, as their material owes more to Motown and Philly International Records than to the futuristic soul music you’re hearing from artists like The Internet or The Rebirth. Legends like Earth Wind and Fire, The Temptations, and the Mighty Clouds of Joy are band listed inspirations, but with the exception of the horn work of saxophonist Will Marcelin, trumpeter Darryl Efford, and trombonist Charles McKay, the sound falls more in the category of such R&B boy group legends as the Spinners, The Dells, and The Dramatics. Their inspirational gospel takes notes from the then-innovative styling of revolutionary gospel soul bridge builders as Walter and Edwin Hawkins, Vanessa Bell Armstrong, Commissioned, The Winans Family, and, yes, the Mighty Clouds. For those missing this increasingly elusive retro soul feel in their worship music, Sensere fits the bill. While not an improvement or an evolution on the near classic perfection of their debut, Sensere’s sophomore album softly extends the sound that made such generally gospel-phobic outlets like MTV even take notice and rightly give this emerging act some rare airplay.

Completely produced and arranged, by singer, lead guitarist, and band founder, James “J-dubb” Wright, the well-sequenced album has a consistent and cohesive vintage sound that nicely flows between tracks, with little to no skipping required. While not always of equal creative weight, each composition has a welcome Christian message and is soundly developed by this fine group of faithful young musicians. Very little here feels smugly self-righteous or damning; instead largely serving as an encouraging collection that addresses real-life situations. With the exception of the old school ballad “Don’t Look Down On A Man,” written by Frank and Huey Williams, Wright also writes on every song, bringing in fellow vocalists Brian Williams, Terrell Terry, and Dwayne Charlton from time to time on co-griot duties. Vocally, these four men are consummate players with definitively masculine voices ranging from sandpaper raspy to a sweet falsetto, excelling in their melisma and fine harmony work, the latter of which doesn’t get showcased nearly enough.

The chief complaint about Sensere on their sophomore release is that while they have exceptional praise and worship singers backed by a heavenly band, too many of their mid-tempo and ballad grooves lack drive and tension. For example, their confectioners sugar single, “Love,” is an adorable ditty that dissolves faster than cotton candy on the tongue with little lingering after taste. When the issues are not in the song arrangement, they're in the mix, as with the lost opportunities on “Those 2 Words,” where Wright’s live drums try to bring some appropriate drama and tautness toward the end, but aren’t mixed to maximum effect. On the high energy of “Good Times,” the engineering missteps undercut a killer Sensere cut again on the call and response interplay, which has the powerful lead front and center in the mix but not the more muted choral voices in their otherwise thrilling responses. Given how well the band keeps so many balls in the air, it’s frustrating to hear these two get dropped more than they should. To have such formidable choral voices or standout band moments so often get softened into the mix has Wright pulling punches on his own best work.

There are exceptions to these rather technical complaints on the up-tempo numbers: “Holler (featuring MoBless),” the funky swing of “Radical Praise (featuring A. Randolph),” and most effectively on the propulsive and intricately arranged “No Lie,” all present high watermarks in Sensere’s young catalog. The swirling harmonies that open “No Lie” are pure doo wop, with kicker percussive work and a rhythm section that begs for the Cholly Atkins footwork of The Temptations or The Four Tops. The horn section, Tim Wimberly’s bass, and Wright’s lead guitar work are used to premium effect, especially as the song builds from the bridge through the vamp out. They do so again on the foot stomping, frenzied tempo “Don’t Look Back,” easily one of the old time religion roof raisers that is only missing rhythmic handclaps and a strong church mother’s tambourines to bring it all home to those rural steeples on Sunday morning. “No Lie” and “Don’t Look Back” are the kinds of songs you want to see these gentlemen put out all the time, knowing they’re capable.

In its simple mic trading among several leads and the hook’s resonating repetition, one of the few worthy ballads arrives through “Not Hopeless (featuring Urban Mystic and Bishop J).” It’s not hard to imagine that song cradling people to empowerment and fortifying their limbs to stand strong against life’s trials and tribulations.

With gems like “Not Hopeless” and “No Lie,” Kingdom Therapy mostly delivers what it intends for fans of a soulful joyful noise. Technical considerations aside, the anointing of the band’s abilities and gifts are indisputable, and encourages one to bear witness to more of their needed brand of Soul of R&B Past throughout their future worship. Recommended.