Tavonna Miller - The Beauty of Believing (2016) 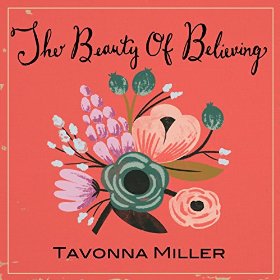 The Beauty of Believing – Tavonna Miller

The Beauty of Believing – Tavonna Miller

The sophomore album of singer/songwriter Tavonna Miller is a classy, rhapsodic affair. There’s an elegance to Miller’s clean-cut proceedings that makes its wide-eyed optimism almost out-of-step with these cynical, even dangerous times. Miller’s antidote is an almost now precious belief in the power of love. Reminiscent of quietly soothing soul albums like Gladys Knight and the Pips’ 1974 I Feel A Song, Phoebe Snow’s 1977 Never Letting Go, and Dionne Warwick’s 1979 Barry Manilow-produced Dionne, one struggles to find more modern-day comparisons to its optimistic romanticism. Sung in a mahogany coated alto with plenty of resonance and jazz trained technique, the album partially suffers only in some of the young writer’s still-developing facility with melody and a penchant for songs longer than today’s average attention span. Still, there’s something to be said for taking one’s time with creating something that is undeniably a work of beauty and an obvious labor of love.

The LA-bred, now Brooklyn-based Berklee College of Music grad first emerged on the indie scene in 2012 with the promising Peace, Love, and the Lack Thereof. Miller’s artistry has grown considerably in the four years since, as evidence by the maturity displayed on The Beauty of Believing. Miller trusts her instrument more and its ability to create pastoral watercolor scenes of light and sound is lush. There is a youthfulness to her tone that inspires a belief in something hopeful and bright. On the song that first captured the attention of SoulTracks.com, “In This Room,” her faith in love and its possibilities carries the tune into another place and time of adolescent wonder. Others like the rollicking “Straight Up Poetic,” one of project’s strongest melodies and performances, fervently defends her love with a celebratory belief in its endurance, making the world stop and take notice…and stock.

The sweetheart album seeks to tell the story of a relationship from its beginning to its possible “happily ever after,” but it’s the pedigree behind the scenes that tells the real story of belief in Ms. Miller’s talents. The musicians are all pros, including Grammy-Award winning Snarky Puppy, Brooklyn based flute duo Flutronix, and arrangers Omar Thomas (Dionne Warwick) and William Wells (Imagine Dragons).  Co-produced by Avi Gunther (Snarky Puppy) and largely written by Miller herself, with the exception of a breezy cover of Gershwin’s “Someone to Watch Over Me,” the project adroitly incorporates such anomalies in contemporary pop music as full string, brass, and woodwind sections which can best be heard on cuts like “Magic.”

Structurally, the tunes by themselves don’t always sell themselves as infectious, with only a few exceptions like “In This Room, “Straight Up Poetic,” and “He Loves Me.” Some songs like “Deliver” have such special moments of fragility and vulnerability, you don’t care that you can’t hum to them. Throughout, it’s Tavonna Miller’s always moving voice and buoyant spirit that make it all work as a beautiful piece of art that will draw listeners in and keep them returning. Backed by a wash of strings and plaintive piano chords, the project closes with what is arguably the most well written ballad of a collection that sometimes struggles with memorable melody, the Frank Maroney co-penned “Is This Really Love?” Interestingly, lyrically it ends The Beauty of Believing on an ambiguous, less sure note in its love musings.

What is sure is that Tavonna Miller and her faithful collaborators have carefully crafted a polished, professional project that is lilting and alive with love and faith, and we can all certainly use more of that these days. Highly Recommended.