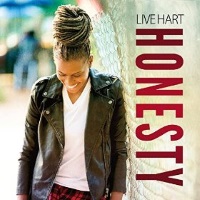 “I think of myself first and foremost as a songwriter. I love to tell stories through song and melody, simply using the guitar as a vehicle to convey those stories.”

There are some folks who feel a deep sense of calling, to pursue a passion that lies within them no matter the cost. For some, those passions lead to religious pursuits, for others it’s a journey into a life in medicine or theater. For rising New Jersey-born singer-songwriter, that calling has and always will be a life in music, of unveiling her heart’s stories through song. And on her debut solo recording Honesty, Hart does just that, delivering rich, heartfelt tales alongside a rich combination of Soul, Folk, Pop with a pinch of R&B that she’s dubbed, “Alternative Soul.”

It’s a record that has literally been a lifetime in the making, with Hart’s first exposure coming as a youngster in school, taking up various instruments with her parent’s encouragement and support. But it was when she joined Pop/R&B girl group Urbanesque that the thoughts of a life in music took greater hold as for four years she collaborated, performed, and earned valuable experience working with the likes of producer Veit Renn (Backstreet Boys, N’Sync). But when the group came to its end, Hart found herself back at the beginning and doing some real soul-searching.

“Once the group disbanded,” she shares, “I really started taking my solo efforts seriously because music is what I’ve always wanted to do. And there was nothing else that was really completing me at the time. I went back to school, I worked different jobs, but ultimately, I was left feeling empty and unfulfilled and it was because music wasn’t part of my life full-time.”

With that realization, Hart set about focusing on her music, writing, recording, and continuing to hone her skills on the guitar. She teamed with producer Shaun Fisher (Mandy Moore, Gloria Estefan), who, over the course of three years, would pour his knowledge into her, giving her the needed confidence and tools to press forward.

“Shaun Fisher is my true mentor and is someone who really believed in me three years ago, really taking a chance writing and creating the album with me.”

It was time well spent as Hart’s newfound dedication found her slowly climbing the ladder, garnering high profile opportunities to open for artists like Monica, Jagged Edge, David Cook, and Jon McLaughlin, among many others. Each and every opportunity found the artist adding to her toolbox, learning each time out and honing her chops that much more.

And it’s on Honesty that all of that hard work pays off.

Boasting influences and sonic textures that recall artists as diverse as John Mayer, Bruno Mars, Sara Bareilles, and India.Arie, Hart’s debut ripples with its namesake, the songs featured showcasing slices of the artist’s life experiences. Throughout tracks like the warmly colored, emotive “I’m Gone” and “Please Don’t Say It’s Over,” the album’s first single, Hart lays bare tales of broken relationships and love gone wrong. In contrast, highlight “Take Me” delivers a high energy rock edge alongside tales of her parent’s support of her dream while “Summer Love” continues to deliver diversity, an electronic Pop vibe rolling over an autobiographical tale of early love and infatuation. The result is a record that showcases many sides of the same prism that is Live Hart, each facet unique and shining with promise.

And it’s that promise that keeps the artist going.

“That’s my thought process when I wake up every day,” she offers. “It’s like, ‘Okay, music is my life and I’m about to go touch people with it, move people, and inspire people with it.”

With Honesty, Live Hart is living out that dream and she invites you to come alongside her, connecting with the music and drawing encouragement from her heartfelt tales of love, loss, and that ever present search for independence.