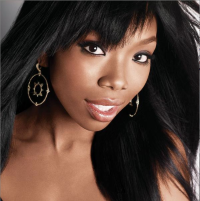 By the time of her 2005 release of "The Best Of Brandy," the first comprehensive collection of her work with Atlantic Records, music superstar, actress and performer Brandy was celebrating her first decade of as a hitmaking recording artist with over five million album sales and sixteen charted Top 20 pop and R&B charted singles to her credit.

Brandy worked with a number of major producers on the four albums she cut for Atlantic: her 1998 sophomore set, "Never Say Never" (which sold in excess of four million copies worldwide) included work from Rodney Jerkins, Fred Jerkins III, Guy Roche and David Foster; the 2002 album "Full Moon" saw Brandy working with Jerkins and Mike City among others; while the 2004 best-seller "Afrodisiac" featured hitmakers the above-mentioned Kanye West and Timbaland.

By the time of her 2005 release of "The Best Of Brandy," the first comprehensive collection of her work with Atlantic Records, music superstar, actress and performer Brandy was celebrating her first decade of as a hitmaking recording artist with over five million album sales and sixteen charted Top 20 pop and R&B charted singles to her credit.

Brandy worked with a number of major producers on the four albums she cut for Atlantic: her 1998 sophomore set, "Never Say Never" (which sold in excess of four million copies worldwide) included work from Rodney Jerkins, Fred Jerkins III, Guy Roche and David Foster; the 2002 album "Full Moon" saw Brandy working with Jerkins and Mike City among others; while the 2004 best-seller "Afrodisiac" featured hitmakers the above-mentioned Kanye West and Timbaland.

For the multi-talented performer - who came to national prominence in her lead role in "Moesha" (the top-rated sitcom which started in 1996 and ended its successful run in 2001) - the release of "The Best Of Brandy" was a showcase for her development as a recording artist over ten busy years: "You can hear the vocal and creative growth from top to bottom," she notes. "It's hard to believe that a whole decade has gone by so quickly. I remember dreaming about making it as a performer, singing in my room and pretending there were people there! To have had more than one hit record...I'm just so thankful and so blessed..."

Brandy reflects, "Looking back, I remember that my vocal on "Baby" was inspired by Whitney. I wanted to be exactly like her musically! The song had so much flavor and soul and I loved the video we did for it. It took off partly because we had this remix of "I Wanna Be Down" with Queen Latifah, Yo Yo and MC Lyte on the flipside and people went crazy for that! Doing that remix was so exciting for me because I was able to do my own thing and not be starstuck by the other artists on there who had already been having hit records for some time. But I managed to pull through!"

"I Wanna Be Down" was of course a hit in its own right when released in the fall of 1994: "At first, I wasn't happy that the song was chosen as my first single," she says. "But once it was released and I saw why everyone responded to the title phrase, I understood why!" On the heels of the success of her first pair of hit singles, Atlantic released "Best Friend" (a Top 10 R&B charted single) in the summer of '95: "That song was dedicated to my brother and it was tough to sing! But everything came together and I got â€˜in the pocket' with the track." The fourth song drawn from Brandy's self-titled 1994 CD was a duet with Wanya Morris of the group Boyz II Men and she remembers, "there's a funny story behind the recording of that song! I really wanted to go to Six Flags (a well-known amusement park outside Los Angeles) but the producers kept saying, â€˜only after you finish recording!' I sang my heart out...I wanted to go to Six Flags so bad! You can hear the passion in my voice...and I did it in one take!"

Brandy's long-awaited sophomore album "Never Say Never" contained no less than six hit singles. It also represented her first involvement as the co-producer of a number of tracks including "Angel In Disguise," released as a single in early '99. "That's always been one of my favorite songs," Brandy notes, "and I really got a kick out of producing my own vocals. Atlantic really trusted my judgment as an artist and they let me do my thing. It was great producing myself for the first time."

The singer put her own special touch on "The Boy Is Mine" which was originally intended as a solo track, she says. "There was all this stuff about me and Monica being rivals so we thought it would be great if we came together and made history. Monica thought it was a great idea. She came in and did her part. We got to hang out and we got to know each other. And, of course, the record was massive hit for both of us!" Selling two million copies, the track (produced by Rodney Jerkins, Dallas Austin and Brandy), "The Boy Is Mine" spent a remarkable thirteen weeks at No. 1 on the Hot 100 and eight weeks as the No. 1 R&B record in 1998.

Other hits from "Never Say Never" included another Brandy favorite, "Almost Doesn't Count," the upbeat "Top Of The World" (with a rap by Mase) and "U Don't Know Me (Like U Used To) which featured Shaunta & Da Brat, a track that Brandy says "was a fun song to do because it made me want to dance. I'm not a dancer like Janet (Jackson) but I thought I was!" she laughs. "Doing that song made me move!" Released at the start of 1999, the Diane Warren-penned "Have You Ever" was one of Brandy's biggest pop hits. "That was the first time I had been in the studio with a producer like David Foster, My voice wasn't as developed as it is now and the song required what producers call â€˜money notes' - the kind that get you a No. 1 on the charts! . I was really nervous but it all worked just fine."

In the spring of 2002, Atlantic released Brandy's third album, "Full Moon" which the singer says showed a lot of her development as an artist. "The title track was produced by Mike City and really was a representation of where I was at when I did it. We didn't know if the song was going to make it to the album because it was different from what I had been doing but I'm glad it did because it really showed where I was coming from musically and vocally...and I could relate to the lyrics of the song, too!" A second track from "Full Moon" is also included on "The Best of Brandy" and she notes that "What About Us" was "a little more aggressive and different for me. I'd say it was a little bit ahead of its time and lyrically, it was about being in a relationship that's not working anymore..."

The 2004 release "Afrodisiac" represented a musical shift for Brandy. At the time she noted,

"I've been through a lot of stuff over the last few years and it's definitely helped me and my creative process to share my life in my music, and to share it in a way that I never have before. The lyrics are straightforward and heartfelt, expressing how I feel and confronting things I've actually experienced. There's so much passion, so much happiness, so much pain - every emotion is on this album." Indicative of that passion, the hit single "Who Is She 2 U" was what Brandy terms "reminiscent of vintage Mary J. Blige. I was expressing my innermost feelings about life, love and relationships. It was me at my most raw...and I loved working with (producer) Timbaland! He really encouraged me to do my best..."

The Mississippi-born, longtime resident of Los Angeles - whose acting work has included the starring role in 1997's Disney television adaptation of "Cinderella" in 1997, the 1998 movie "I Still Know What You Did Last Summer" and the 1999 made-for-television movie "Double Platinum" with Diana Ross - has made busy of late, currently working on an as-yet-untitled sit-com with Fox and Disney while making changes in her life: "I moved to Arizona which is a great change from the pace of L.A. and I'm spending time raising my daughter and taking my time to decide what's next with my recording career. Meanwhile, I sing in the shower...almost every day...and sometimes for a whole hour! You see, singing is something I'll always be doing because music is my passion and that's where my heart is."

It was several years, which included some personal tragedy such as a fatal auto accident in which she was involved, for Brandy to return with Human, a critically-acclaimed album that showed an increased maturity in her writing.  It was released in December 2008. She followed it four years later with the more assured Two Eleven.