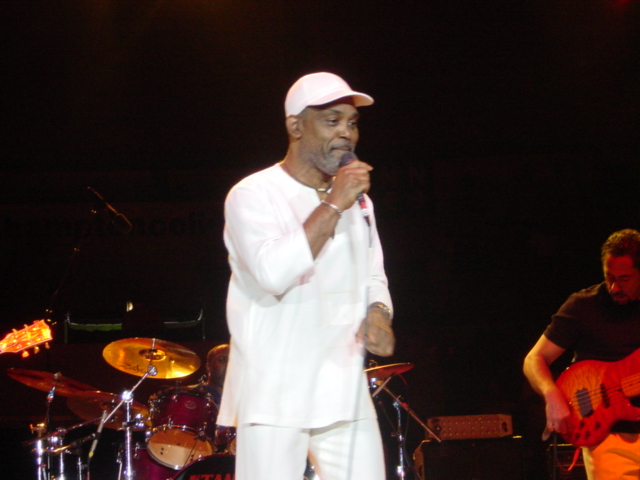 By William Henderson, CC BY 2.0, Link

By any measure, one of the most talented but criminally underappreciated self-contained bands of the past three decades has been Frankie Beverly and Maze. Their ability to fuse soul and jazz with an irresistible groove and intelligent lyrical content has gained for them an extremely loyal following among Soul music fans and great respect among their performing peers, but little attention in the pop music world.

By any measure, one of the most talented but criminally underappreciated self-contained bands of the past three decades has been Frankie Beverly and Maze. Their ability to fuse soul and jazz with an irresistible groove and intelligent lyrical content has gained for them an extremely loyal following among Soul music fans and great respect among their performing peers, but little attention in the pop music world.

Group founder and leader Frankie Beverly was born and raised in the musical city of Philadelphia, and began singing as a child in church. As an early teen he hooked up with 50s soul group the Silhouettes (who sang the doo-wop number "Get a Job," which influenced Smokey Robinson's first hit composition, "Got a Job"). By the early 60s, Beverly founded a doo-wop group called the Butlers and worked with future legendary Philly record executive and producer Kenny Gamble. The Butlers had significant local success, but never broke out nationally.

While clearly talented, Beverly and his various bands were not the prototypical Philly soul acts, and in the early 70s he moved with his new group to San Francisco, where he met Marvin Gaye, who took a liking to the group and helped them land a contract with Capitol Records under the new name Maze Featuring Frankie Beverly.

The group's Capitol debut was a Soul smash, yielding the hit "While I'm Alone" and hitting the Soul top 10. As with the act's future albums, the subtle jazz stylings and smooth grooves were extremely appealing to Soul music fans, but had almost zero pop crossover. Over the next decade, Maze released a series of well crafted, well received albums that uniformly hit top 10 Soul and pulled onto the Top 100 pop charts based on sales among black audiences. The group also released a number of memorable singles, including "Joy and Pain," "Southern Girl," "Love Is The Key," "Back In Stride" (a #1 Soul hit) and "Can't Get Over You" (another #1).

After a string of gold and platinum albums, Maze left Capitol in 1989 and released the album Silky Soul on Warner Brothers, another fine disc highlighted by the wonderful Marvin Gaye tribute title cut. Soon afterward, the group performed a series of critically acclaimed performances in connection with Nelson Mandela's first tour of the U.S. following his release from a South African prison.

Maze followed in 1993 with Back to Basics, another hit album that confounded critics who felt that the group's best days were behind it. Inexplicably, it became the band's final release of the decade, despite hitting the Soul top 5 and the Pop top 40. Since then, Maze, now consisting of Beverly, keyboardist Carl Wheeler, bass guitarist Robin Duhe, and percussionists McKinley "Bug" Williams and Roame, has been silent on record, while continuing to tour regularly. However, pushed by Frankie Beverly's son Anthony, the silence was broken during 2009, as the group participated in an All-Star tribute to Maze, featuring an A-List of contemporary R&B artists.  The disc, Silky Soul Music...An All Star Tribute to Maze featuring Frankie Beverly, was released to uniform critical praise.  Sadly, group member Williams died on September 4, 2011. In July 2012, Beverly won the Lifetime Achievement Award at the BET Awards.

As we sit in the second decade of the new millennium, the influence of Maze continues to shine, as dozens of young acts acknowledge the influence of these R&B pioneers. And the group's enviable catalog is still the soundtrack for family parties throughout America.