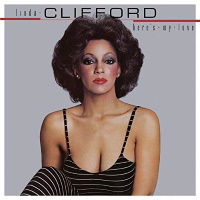 Both drop dead gorgeous and an extremely talented singer, Clifford gathered a huge following among dance enthusiasts in the late 70s and early 80s for a series of smash disco hits; but to label her as a "disco diva" understates the length and breadth of her career.

Both drop dead gorgeous and an extremely talented singer, Clifford gathered a huge following among dance enthusiasts in the late 70s and early 80s for a series of smash disco hits; but to label her as a "disco diva" understates the length and breadth of her career.

Born in New York, Clifford was singing on local television as a child. In addition to being named "Miss New York" in a beauty pageant, Clifford was developing as a singing prodigy. As a teen she developed a love for jazz, performing with the Jericho Jazz Singers before forming the trio Linda and the Tradewinds. In her 20s she moved from jazz to R&B and was signed by Paramount Records, with which she landed the minor hit "Long Long Winter." However, it was her signing by Curtis Mayfield for his Curtom record label that was the turning point for her young career. She turned heads with her Curtom debut, Linda, but it was her 1978 follow-up, If My Friends Could See Me Now, that was an ideal vehicle for her, hitting the disco market at its peak. Her discofied version of the title track (previously a pop standard) became an across-the-board smash, and the follow-up single, "Runaway Love," was even bigger.

The album made her an important new face in the dance music world and earned her an American Music Awards nomination. She followed it with a hit contribution ("Red Light") to the Fame soundtrack and her own third album, Let Me Be Your Woman, which boasted one of 1979's sexiest album covers. Clifford teamed with soul legend Isaac Hayes for I'm Yours, with Hayes producing her #1 dance hit "Shoot Your Best Shot." She also released a critically acclaimed album of duets with Mayfield.

By 1982 the disco backlash was in full swing, and Clifford's star began to fade. At the same time she was a new mother and attempted to balance her career with raising a young family. She released the underrated album I'll Keep On Loving You, which included a couple wonderful ballads, "Only The Angels Know" and "All The Man I Need" (a #1 smash at decade later for Whitney Houston that was written by Fame writers Michael Gore and Dean Pitchford for Clifford to sing to her new husband), but the disc failed to generate much attention.

Clifford spent the next decade and a half focusing on her family more than her career. She recounts, "I'm so glad I did. I was there for my kids. I was the one dropping them off at school everyday." During this period she sang commercial jingles for McDonald's, Pontiac and other companies and also recorded sporadically for Red Label Records, but stayed mostly near her Chicago area home. She also spent more time developing as a songwriter.

As the 21st Century arrived, it brought a new appreciation for Clifford's discography and she again began recording dance songs, the biggest of which were "Changin'" and "Philly Groove." In 2005, she was presented the Lifetime Achievement Award by the Chicago Music Awards. Clifford continues to perform around the world and also writes for others such as Gloria Gaynor and Martha Wash (she provided the latter with the 2005 hit "You Lift Me Up").

With her children grown, Clifford began branching out again. She continues to write music (in 2007, Wash recorded Clifford's "Don't Be Afraid") and is back on stage. Linda  joined Wash and others in the touring First Ladies of Disco act, and recorded some successful songs with her lady friends.

While Clifford is best known for her dance hits of the late 70s, she has shown over more than four decades in the spotlight that she is a versatile performer and songwriter who has talent that goes well beyond the "disco" label. A class act indeed.