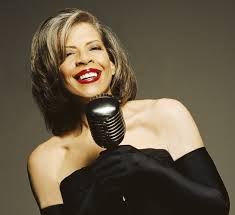 A performer since she was a toddler, Patti Austin has carved a niche as a wonderful interpreter of soul, jazz, scat and adult contemporary music, forming a musical personality over 50 years that has only reached full clarity over the past half decade.

A performer since she was a toddler, Patti Austin has carved a niche as a wonderful interpreter of soul, jazz, scat and adult contemporary music, forming a musical personality over 50 years that has only reached full clarity over the past half decade.

The Goddaughter of musical legends Quincy Jones and Dinah Washington, Austin first achieved modest national attention recording jazz albums for Creed Taylor's CTI label in the late 70s.  But it was her work with Quincy Jones in the early 80s that would bring her the credit her smoky, soulful voice deserved.  Appearing on Jones's The Dude ("Betcha Wouldn't Hurt Me," "Razmatazz") set the stage for her Qwest label debut, the wonderful Every Home Should Have One, and its smash duet with James Ingram, "Baby Come To Me."  Every Home was a typically solid Jones production, and a great listen front-to-back, including the bouncy title cut, "Do You Love Me" and a nice cover of Thom Bell's classic "Stop, Look, Listen."  She and Ingram scored again in 1983 with the maudlin "How Do You Keep the Music Playing?" from the Goldie Hawn movie Best Friends.

Austin continued to record with various producers during the 80s and 90s (scoring her biggest solo hit in 1986 with Jimmy Jam and Terry Lewis's "The Heat of Heat"), always covering various styles but often with lesser material and ponderous arrangements, her producers placing too much burden on her wonderful voice to save otherwise mediocre albums.  The one exception during this period was The Real Me, her first album of standards, excellently produced by David Pack, and a wonderful glimpse of where her career would ultimately take her.  Her covers of the classic "Love Letters" and "Smoke Gets In Your Eyes" and her duet with Pack on "True Love" are career highlights.

Though her albums were generally uneven during this period, Patti Austin's constant exploration was admirable, and each album include one or two gems where producer and material were up to the great performer.  Then, beginning with 1999's Street of Dreams, Austin began to channel her immense talents toward interpreting jazz standards, most successfully with 2002's For Ella, her salute to Ella Fitzgerald. It was a worthy sequel to The Real Me, and created another chapter in this skillful musical interpreter's career.

In late 2007, Austin released Avant Gershwin, her personal take on the Gershwin songbook.  It was a critical and commercial success, earning for her a Grammy Award for Best Jazz Vocal Performance.  Her follow up album took over three years to release, as she signed with Shanachie Records for Sound Advice a solid collection of mostly rock and soul covers. Austin has continued to perform and release singles regularly since then, all with the exquisite taste that has been the hallmark of her career.