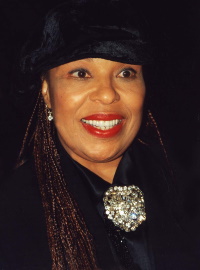 photograph by JohnMathewSmith, distributed under a CC-BY 2.0 license

Over the two decade period from 1970-1990, Roberta Flack quietly opened doors for a new generation of female singers, making beautiful music but also making history. Her gentle amalgamation of Soul, Gospel and folk, combined with a message of both empowerment and love, created an intelligent, thoughtful pathway for modern singers such as India.Arie and Jill Scott.

Over the two decade period from 1970-1990, Roberta Flack quietly opened doors for a new generation of female singers, making beautiful music but also making history. Her gentle amalgamation of Soul, Gospel and folk, combined with a message of both empowerment and love, created an intelligent, thoughtful pathway for modern singers such as India.Arie and Jill Scott.

Born in Asheville, North Carolina in 1937, Flack was attracted to music and became a talented singer and pianist at a very young age. In addition to her musical family, the members of which were involved in their church choir and orchestra, she was influenced by the great Gospel singers of her day, especially Mahalia Jackson. Amazingly, she was accepted into Howard University on a full music scholarship at age 15, and there she met future singing partner Donny Hathaway. Jazz pianist Les McCann heard her perform in 1968 and brought her to the attention of Atlantic Records, which signed her in 1969.

Her 1970 debut album, First Take, was a sparsely arranged, acoustic album that combined elements of soul, folk and jazz, and was a mild success until Clint Eastwood included the slow ballad, "The First Time Ever I Saw Your Face," in his 1972 thriller Play Misty For Me, after which the song was released as a single and shot to #1. In the meantime, however, she had released three other albums, including Chapter Two, Quiet Fire and her album of duets with Hathaway, Roberta Flack and Donny Hathaway. The former two solidified her appeal to a new generation of educated, urban African Americans, while the latter became an unadulterated smash across the board and a critical favorite of a scope perhaps still unmatched by any subsequent album of duets. It became a radio favorite based on such great cuts as "Where is the Love" and "You've Got A Friend," but became a classic because of the deep balladry and sensitivity of "Come Ye Disconsolate," "I (Who Have Nothing)," "Be Real Black for Me" and a breathtaking cover of "For All We Know."

After the success of "The First Time," Flack scored even bigger with the album and single "Killing Me Softly," her second number one and a hit 20 years later for the Fugees. She followed the next year with the jazzier Feel Like Makin' Love. Despite significant resistance from Atlantic, she took on the role of producer for that album (using the pseudonym "Rubina Flake") and surrounded herself with an amazing crew of jazz musicians and singers, including Bob James, Ralph McDonald, Hugh McCracken and Patti Austin. She was vindicated when the title cut became her third #1.

Flack slowed down her recording schedule over the next couple of years, but came back in 1977 with another classic duet with Hathaway, "The Closer I Get To You" (most recently remade by Luther Vandross and Beyonce). It also hit #1 and led off her solid Blue Lights in the Basement, which also included a wonderful ballad "Where I'll Find You." She stumbled a bit the next year, working with pop producer Joe Brooks ("You Light Up My Life") on her rather bland eponymous 1978 album, but scored a minor hit with "If Ever I See You Again." That year she began working on another album of duets with Hathaway, but their collaboration was tragically cut short when Hathaway committed suicide. His death sent her reeling, but in 1980 she released the album Roberta Flack Featuring Donny Hathaway, which included mostly solo material but also two songs she had completed with Hathaway before his death ("Only Heaven Can Wait" and Stevie Wonder's "You Are My Heaven").

In 1979, Flack began a sporadic two decade singing relationship with Peabo Bryson, starting with the disappointing Live and More disc, but redeeming itself three years later with the fine Urban Adult Contemporary disc Born to Love. The latter resulted in a number of notable songs, including the #1 "Tonight I Celebrate My Love," "You're Looking Like Love to Me," and the excellent album cut "Maybe." Her solo recordings during the period had less success.

Flack then took another few years off before producing and releasing the airy Oasis in 1988. It was her most consistently pleasing album in 15 years, and included great material (some written by Flack) and another top notch posse of musicians. Oasis reintroduced Flack to urban adult audiences and stayed on the charts for several months. She followed it three years later with Set the Night to Music, a lesser disc that included a hit duet with Maxi Priest. In 1994 Flack released Roberta, an album of standards that became her last major release. She has since recorded two Christmas albums, 1997's Christmas Album (which included "As Long As There Is Christmas," a duet with Bryson that was included in Beauty and the Beast 2) and 2003's Holiday.

In February 2005, Rhino Records released The Very Best of Roberta Flack, an excellent career retrospective that includes all the hits and a number of fine album cuts. It is the best and most comprehensive compilation yet of Flack's legendary career.

Flack continues to tour regularly, particularly in the annual Colors of Christmas tour. She is also actively involved AEC (Artist Empowerment Coalition), an advocacy group working for artists' rights and control of their creative properties.

Roberta Flack continues to be admired by a younger generation of intelligent, creative soul singers whose pathway to success was in large part paved by this talented, classic soul artist.