A Birthday Tribute to Smokey Robinson 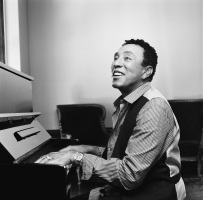 We wish a very happy birthday to the great Smokey Robinson, born February 19, 1940.

We wish a very happy birthday to the great Smokey Robinson, born February 19, 1940.

The man Bob Dylan once called one of America's greatest poets began mastering his trade inauspiciously, writing poems at Detroit's Dwyer Elementary while avidly listening to soul and classic popular music.  He continued honing his writing skills in high school and formed a local singing group called the Matadors.  But it was his chance meeting with fellow Detroiter Berry Gordy that changed Smokey's life.  Gordy signed the Matadors (then called the Miracles) and mentored Smokey on songwriting skills, helping the young protege turn clever but disjointed rhymes into three minute short stories.  The result was the best songwriter in America during the early 60s, churning out classic cuts for the Miracles, the Temptations, Marvin Gaye and others.  While his songwriting star at Motown would later be eclipsed by Holland-Dozier-Holland, it is amazing to see Robinson's output between 1962-66.  During that time he penned songs like "My Girl," "Ooh Baby Baby," "The Way You Do The Things You Do," "My Guy," "It's Growing" and dozens of other soul classics.

Robinson also became a heartthrob as the lead singer for the Miracles.  His smooth voice and green eyes were magnets for young women, and he and the Miracles rode the charts consistently for the entire decade with hits like "Mickey's Monkey," "I Second That Emotion" and their all-time classic "The Tracks of My Tears."

In 1972 Robinson left the Miracles for a solo career and a bigger job in the Motown organization, and was replaced by Billy Griffin. Smokey released a number of uneven albums through the 70s, with only moderate chart success.  Perhaps his biggest contribution was a theme album of romantic ballads that is more memorable for the musical genre it spawned than for the album itself.  A Quiet Storm became the reference album for the "Quiet Storm" format of smooth love ballads that would dominate nighttime black radio in the 80s and would help launch the careers of soul balladeers such as Anita Baker and Luther Vandross.

Smokey seemed more an afterthought as the 70s closed, but an unlikely second release from his Where There's Smoke album became his rebirth, as "Cruisin'" shot to the top of the charts and opened a new audience and a new decade to Robinson's smooth stylings.  It also set up a landmark follow up album that was the best of his career and one of the best soul albums of the 80s.  Warm Thoughts contained only one hit, the somewhat gimmicky "Let Me Be The Clock," but was, front to back, a breathtaking album that brought together the best Smokey elements -- the lyrical play, the memorable hooks and the restrained, effective production -- in a way only hinted at in his previous solo releases.  Smokey Robinson fans everywhere should seek it out.

Smokey continued to score in the early 80s with big hits like "Bein' With You" and "Tell Me Tomorrow," but became creatively and physically incapacitated by a cocaine addition that he chronicled in his autobiography, but which he almost miraculously overcame in 1987, in time to release the smash album One Heartbeat.  He continued to record for the remainder of the 80s with Motown, but suffered with other artists from Motown's developing dysfunction.  He moved to upstart label SBK in 1991 after Gordy sold Motown, but later returned in 1999 to release Intimate, a nice collection of new material.

In April 2004, Smokey released Food for the Spirit, his first Gospel album and his first studio album of any kind in five years. A year later, Motown released My World, the most comprehensive single disc compilation of Smokey Robinson's solo work and his recordings with the Miracles.  Next in 2007 was Timeless, a collection of standards recorded with a big band.  It didn't make much of a dent in the charts, but showed him to be in good voice. In 2010, Smokey released an album of new material called Time Flies When You're Having Fun. It was a welcome release that harkened back to the sounds of some of Smokey's early solo work.  He also stayed busy touring and appeared on a great episode of Daryl Hall's Live From Daryl's House.

As Motown has celebrated its various anniversaries over the years, Smokey seemed to be everywhere, giving tours of the Motown Museum, being interviewed by one network after another, and serving largely as the face of Motown for the millions around the world who wanted to celebrate what the Sound of Young America meant to them in their lives.  And there couldn't have been a better spokesperson. Happy birthday, Smokey!