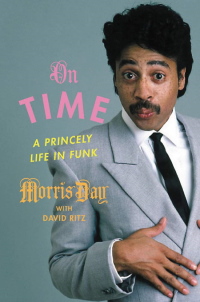 The Time, the Prince-conceived band responsible for irresistibly funky jams such as “Jungle Love,” “The Walk,” and “777-9311,” achieved notoriety over airwaves and the silver screen thanks to a trio of albums largely helmed by His Royal Badness and a prime position in the plot of his 1984 blockbuster, Purple Rain. In the process, frontman Morris Day established himself as a performer with a tonal sensibility akin to Prince’s—but also with a more outwardly vainglorious (and comedic) stage persona.

The Time, the Prince-conceived band responsible for irresistibly funky jams such as “Jungle Love,” “The Walk,” and “777-9311,” achieved notoriety over airwaves and the silver screen thanks to a trio of albums largely helmed by His Royal Badness and a prime position in the plot of his 1984 blockbuster, Purple Rain. In the process, frontman Morris Day established himself as a performer with a tonal sensibility akin to Prince’s—but also with a more outwardly vainglorious (and comedic) stage persona.

Day began his working relationship with Prince in the mid-‘70s as drummer for the band Grand Central, and went on to work as a videographer for his first solo tours before the two took to the studio in 1981 to cut what would become The Time’s self-titled debut album. Sharing a similar (if not always equal, as Day himself admits) passion and commitment for an array of musical styles and top-notch musicianship, they experienced plentiful amounts of both camaraderie and competitiveness over the span of three decades. Day details the highs and lows and twists and turns of their complicated bond throughout the pages of On Time: A Princely Life in Funk.

Smoothly balancing discussion of music and life, On Time is a breezy read that is largely a memoir, but also, in part, an entertaining commentary. Day uses his words to not only tell his own story, but also to put himself in the shoes of Prince, creating (through third-person point of view) a sort of virtual dialogue of the dynamics that occurred through the making of Purple Rain, studio sessions, gaps in communication, and once-in-a-lifetime experiences that took place over the course of the pair’s friendship.

While he goes into fair depth about his upbringing and early adulthood prior to fame, Day wisely splits the focus between his own affairs and reflection on Prince’s artistic timeline (and its relation to The Time and Day’s solo projects) for a good chunk of On Time. This makes for a meaningful inside view of the modus operandi of Prince on an everyday level, as well as how that impacted those in his closest circle—however far away he may have seemed at the time.

During Prince’s lifetime, his story converged with Day’s at many points: if not always in exact time, then by parallel of circumstances. Having both come from childhood homes broken to one degree or another, they shared an escape through music. Although the differences in wiring of their internal hard drives resulted in inevitable clashes and disappointments, the bond was cemented throughout obstacles that would have driven many friends apart. Day’s recall of Prince’s departure from Grand Central to obtain his own record deal without a word to his bandmates is poignant and well-tempered. He understood the artistic necessity that caused the chain of events, but understandably was left a bit scarred by the lack of communication after the hours of sweat and hope invested in the group by all parties.

Day details how the short life of a band he joined after Prince’s disappearing act, coupled with his lack of thought-out choices in his personal life, led to a decline in his morale and set him on a path of menial jobs and absentee fatherhood. The warning bells went off in due time, however, and it wasn’t long before he found himself back in the Minneapolis music scene—and working alongside his friend. Assuming the role of Prince’s videographer was sudden and unexpected, but it proved beneficial to both parties. A deeper understanding and trust was built in the process. Not to mention, the humbling happenings along the way—opening for Rick James and The Rolling Stones each presented Prince with the kinds of unenviable obstacles that would set back most artists. Instead, Prince forged ahead and Day learned a heck of a lot about the art of performance in the process.

Readers will likely glean the strongest satisfaction from Day’s recounting of the recording sessions for The Time’s first records and the filming of Purple Rain. In each case, he offers telling overviews of the characteristics that embodied the creative processes, but strays from turning the memories into deep analyses. Colorful stories of The Time’s early touring adventures, as well as the comical moments that led to Day’s trademark mirror routine and the creation of “The Bird,” pepper the conversation. The clash between the enjoyment of a dream realized for Day (who acknowledges Prince as “the cat who turned me into a singer”), countered with the onus of serving as the Purple One’s alter ego, plays out as a colorful and somewhat unpredictable sequence of developments.

The formative stages of Purple Rain coincided with Prince’s firing of future super-producers Jimmy Jam and Terry Lewis from The Time. This proved to be a major point of dissent for Day and him, and in several ways signaled the beginning of the end. It wasn’t that simple, though. He recalls, “I was getting high, and being high hardly helps clarity…But it was more than my financial inability to walk away from the Prince machine…I was part of Prince’s magical enterprise just when the magic was spreading.” Before long, Prince’s perplexing behavior through the filming of the movie, combined with the increasingly blurred lines in Day’s mind between his internal self and growing public persona (and the vices to which he turned to cope with that), led to an unraveling of the pair’s professional and personal relations.

It didn’t take long for Day to find his solo footing after the inevitable disbanding of The Time; keeping it going was more of a challenge. Rekindling the musical flame with Prince came about a few times over the ensuing decades, with the constant of uncertainty always looming in the forefront. As for the quieter years of Day’s musical output, he uses the opportunity in On Time to convey his observations on Prince’s prowess, musing how, through the years when he went by an unpronounceable symbol and had “Slave” written on his face, he was “no one’s slave and no one’s fool. [It] was a smart way to expand his brand and boost his sales. He knew no one would ever forget his name.”

Prince’s strict conformance to religious doctrines in later years expanded to an insistence that those working closest with him follow the same principles. This was to be the straw that broke the camel’s back in the long term for Day and him, with ten years passing before the two made amends shortly before Prince’s tragic death in 2016. What’s clear from the pages of On Time is that Day has a firm grasp of the pivotal role that Prince played in kickstarting and solidifying his reputation as a credible musician. At the same time, he’s keenly aware of his own strengths and limitations outside of that umbrella. As a result, On Time is an enticing read with ample candor on the music that has driven his life and the lives of countless listeners. Prince the artist, Time the band, and Morris the man are each given generous time in the spotlight, and the meter is precisely in time. Recommended.