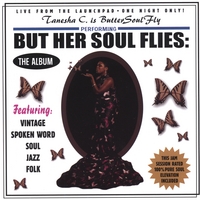 Tanesha C. Blackmon knows her calling. She is an encourager, creative writer, journalist and motivational speaker determined to touch the suffering and encourage others to hold on.

In 2006, Tanesha a.k.a. ButterSoulFlyTM released her debut spoken word album, the independently produced-But Her Soul FliesTM. A recent reviewer wrote, "Her name in essence, speaks for itself. I could explain the process of how a butterfly becomes a butterfly by taking you back to the cocoon, but this would only take away from the regality and depth of who and what she is on and off this CD. She needn't prove her soulfulness, sultriness and free spirit to soar...we simply let the words speak for themselves." (Traci E. Currie,Ph.D. 2006).

"My goal was to create a work that would encourage someone to hold on.
A legacy I and my ancestors could be proud of," she says. "This project is so much bigger than me because I am standing on the shoulders of those who came before me."

Blackmon served several years as a regular contributor to the Ypsilanti Courier and as a features editor at the Eastern Echo where she interviewed people like Joe Clark and the legendary Last Poets for a series of features that highlighted the beauty and struggle of the black experience. During this time, Blackmon was the first college daily editor to produce a full page spread on the Last Poets (most recently noted for their 2006 Grammy win).

Over the years, she received awards for her efforts including the Community Journalism Award from the Michigan Press Association, and the Phyllis Wheatley award from the NAACP; EMU student chapter. Her interview subjects' range from the Philadephia Eagles star player, Charlie Batch to R& B songbird Dave Hollister.

Is the world ready for this combination of narrative-spun to jazz and soul licks? "I believe so," she says. "2006 is the year of spoken word activism. People are ready for more. To be engaged. To jam to art that stands for something."

But Her Soul Flies