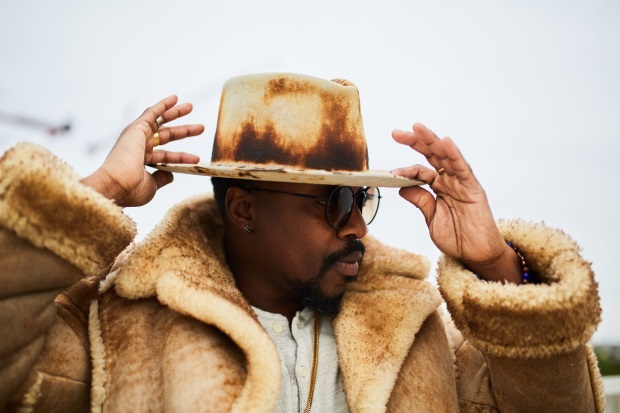 "This right here is the 'underground railroad' to love," said headliner Anthony Hamilton to a packed-out Music Hall of 3,000+ in Dallas TX on Sunday night. "I'm just trying to bring back the courtin', blue lights house party type of sound, can I take y'all back?"

"This right here is the 'underground railroad' to love," said headliner Anthony Hamilton to a packed-out Music Hall of 3,000+ in Dallas TX on Sunday night. "I'm just trying to bring back the courtin', blue lights house party type of sound, can I take y'all back?"

The 48-year-old Grammy-Award-winning performer, who's also in the midst of recording his seventh studio album, gifted fans with over an hour of newer and vintage material: in between bantering with the crowd ("Oh, it's your birthday Baby? Lemme see that 'cake'...") and executing saucy dance moves, the elements of 70s era soul ("Float On," "Have You Seen Her," "Grandma's Hands") Hamilton and his skilled background singers flawlessly combined well-loved selections like "What I'm Feelin'" and "Best of Me" with Prince and the Jackson Five. "Can't Let Go" and "Charlene" were mimicked by the audience ad-lib for adlib, and his entreaty to "use discernment with those who aren't with us or for us" was followed by his signature 'everyman' anthem and breakout hit, "Comin' From Where I'm From."

Another unexpected highlight took place when a couple apparently felt so moved during Anthony's tender rendering of "Point of It All" that they literally became engaged on the spot, earning cheers and applause loud enough and long enough to solicit kudos from the star: "Congratulations to y'all, that's a beautiful thang," he chuckled. "I might even babysit for you: I got six sons and plenty of experience!"

The evening's opening act, Leela James, gave new depth and dimension to the cliche "the show must go on" by revealing, in-between spirited send-ups of "Set Me Free," "Don't Want You Back" and "Hard For Me" that she was performing with a case of strep throat: "I took my temperature right before I came out here and I'm sweatin' it out, but I'm here for y'all and I'ma keep pushing!" Despite her illness, James was still a powerhouse of personality, telling single people to "show love in order to earn love" and even inviting a pair of singles up front to spark a love connection, only to earn laughs when she learned the man and woman were related: "we can't be doin' that incest stuff!" Her charisma and stage presence aside, Leela earned a standing ovation when she insisted, even after nearly collapsing onstage, on soldiering through "Fall For You," supported on either side by her female background vocalists, who held her hands and wiped her tears as she sobbed through the final verse.