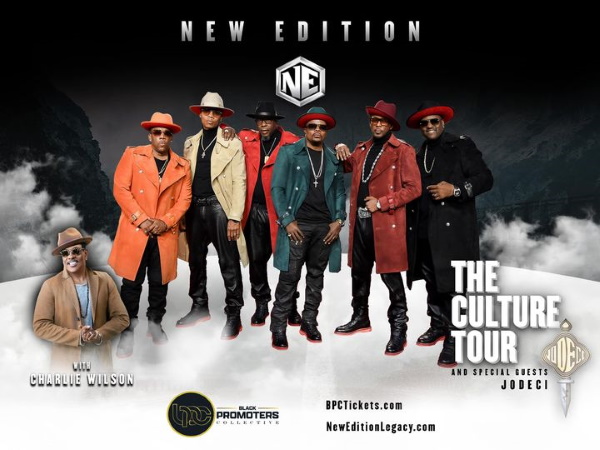 In real life, there may be no such thing as an actual time machine, but the music performed by R&B heavy-hitters Jodeci, Charlie Wilson and headliners New Edition took an enthusiastic sold-out throng of thousands at Ft. Worth's Dickies Arena through dozens of hits, transporting fans back to the 80s and 90's golden era of soul.

In real life, there may be no such thing as an actual time machine, but the music performed by R&B heavy-hitters Jodeci, Charlie Wilson and headliners New Edition took an enthusiastic sold-out throng of thousands at Ft. Worth's Dickies Arena through dozens of hits, transporting fans back to the 80s and 90's golden era of soul.

"Uncle Charlie" Wilson, the lone remaining member of the Gap Band and a solo star since the late 90s, regaled the crowd with hit after hit, gospel-flecked delivery and enthusiasm: "I got the energy y'all, but not the knees!" He chuckled. "These two knee replacements hurt, but I'm gonna have some fun up here tonight!"  He, his band and half a dozen dancers took the crowd through time-tested favorites like "There Goes My Baby," "Charlie, Last Name Wilson," "You Are," "Blessed,"  "Yearning For Your Love, "Early In The Morning," and a couple of Zapp-originating grooves, "Do Wa Ditty" and the late Roger Troutman's "I Wanna Be Your Man."  His set closed with a heart-rending tribute to the Almighty, soliciting praise like the preacher's son that he is and thanking the Lord for "cleaning me up and turning me around" from homelessness and drug addiction and keeping him sober for 27 years. Close to 70 years old, Wilson sings and moves with a fervor of a man half his age and was easily one of the evening's best entertainers.

When New Edition finally appeared, the anticipation was stratospheric and the Boston, MA natives did not disappoint.  Ralph Tresvant, Ronnie DeVoe, Michael Bivins, Ricky Belly Bobby Brown and Johnny Gill have amassed millions in sales as groups, trios and solo artists, so the set was an homage to each aspect of their superstar careers. "Candy Girl," "Mr. Telephone Man" and "If It Isn't Love," their opening hits, were meticulously performed back to back, as if part of a favorite playlist, and they playfully introduced themselves to the adoring crowd one by one, zodiac signs and all, interpolating the 70s Floaters classic "Float On", before diving into their BBD, NE and solo hits.

With video montages (and even clips from their 2017 BET film), clothing changes and accompanying choreography, NE took the fans through decades of favorites, from "Jealous Girl," "Cool It Now" and "Count Me Out," where they lightly touched on the tenseness and toxicity that have played the group over the years: "Yo Bob," asked Michael Bivins, "why did you leave the stage just now?"

Bobby Brown didn't move as much as his counterparts, but that didn't mean he wasn't of strong voice when delivering "Roni," “My Prerogative," "Rock Witcha" and "Every Little Step," which was revealed as originally intended to be a NE song, but somehow only landed on Bobby's album. Fans moved and sung along to nearly every lyric of every groove, from Ralph Tresvant's "Sensitivity," "Johnny Gill's "Rub You the Right Way" and "BBD's "Poison," "Do Me" and even "When Will I See You Smile Again." Their poignant deliveries of "Can You Stand the Rain" and especially "Boys to Men" reminded us of how long their journey has been in the business, and how triumphant they've been to remain, 40 years later, a beloved part of popular music.

Jodeci opened the evening, but due to the hour-plus delay of entry because of the unregulated traffic outside of Dickie's, their set was missed and could not be reviewed.