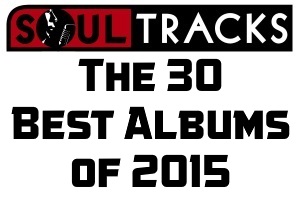 (December 19, 2015) It is always fun at the end of each year to celebrate the best of that year.  And 2015 had a lot of great soul music. And so we've gathered our music critics to each pick their favorites, which we've assembled below.

The 50 Best Songs of the Year

Artist of the Year

(December 19, 2015) It is always fun at the end of each year to celebrate the best of that year.  And 2015 had a lot of great soul music. And so we've gathered our music critics to each pick their favorites, which we've assembled below.

The 50 Best Songs of the Year

Artist of the Year

The toughest part of this is limiting the choices, but here are the selections from Chris Rizik (CR), L. Michael Gipson (LMG), J. Matthew Cobb (JMC), Melody Charles (MC), Peggy Oliver (PO), Robb Patryk (RP), Justin Kantor (JMK), Ann Marie Collymore (AMC) and Howard Dukes (HD).  Also, each album name is a link to our review of the album. These are uniformly releases with which you can't go wrong -- or so our critics say. Looking for a Christmas gift for a music lover?  Then spend some time with these winners. You can SEARCH at the top of this page to learn more about these talented artists.

Our Critics' Picks - Albums of the Year (in artist alphabetical order)

Adele: 25 - Not as pristine as 21, but Adele’s 25 sounds more mature and shows off a new level of soulful creativity, thanks to radio-ready beats (“Send My Love (To Your New Lover),” “Water Under the Bridge”) and more of her arresting power ballads (“Hello,” “When We Were Young”). (JMC)

Rasheed Ali: 1968: Soul Power- The fact that the issues addressed on this musical history lesson remain relevant accounts for the fact the Ali’s retelling of the people and events 1968 is compelling. Still, the sheer funkiness of his record made 1968: Soul Power a compelling record. (HD)

Terri Lyne Carrington: Mosaic Project: Love And Soul - Carrington hit a formula that manages to avoid being formulaic on her the second installment of her project that brings together a group of virtuosic female musicians and vocalists. Carrington brought top flight talent such as Oleta Adams, Ledisi, and Lizz Wright and their skills are matched by the material they were given. (HD)

Columbia Nights: In All Things - A start to finish work of art, this sophomore project felt like a multi-movement jazz suite of several genres of Black American Music traditions all rolled up into something modern, layered, and most of all sexy. (LMG)

The Foreign Exchange – Tales From the Land of Milk & Honey - They’ve become family by now with warm, electrosoul sounds both familiar and welcome, but it was the occasional detours taken on this sweetheart set that reminded us that their evolution is far from done. (LMG)

Terisa Griffin: Revival of Soul Nearly a decade after she broke out with My Naked Soul, Terisa Griffin delivers the whole package, a breathtaking instant classic that can stand toe to toe with the best of Anita and Phyllis (CR)

The Internet: Ego Death: Dark drum and bass, jazzy-laden trippy vibes are heavy on this brilliant album. The Internet managed to take us on an auditory experience that really wasn`t expected. Kudos to them for bending to the left with this one. (AMC)

Emily King: The Switch - Back to bubbling on the underground scene after a somewhat forced major label debut, with genre-defying projects like this, this singer-songwriter has emerged as one of the most creative forces in urban alternative music today. (LMG)

Lianne La Havas – Blood - Beating the sophomore jinx, La Havas reentered your heart through musical subtlety rather than the obvious pop bombast or creative safety moves that are common with a breakout debut artist on their second time around, illustrating how she’s no flash in the pan, but a real artist who’ll endure. (LMG)

Kenny Lattimore: Anatomy of a Man - Kenny has been gone for too long, but it’s great to hear that the time away and work in the lab led to this sonic beauty. Love songs the way they’re supposed to be delivered: sexy, sensual and genuine. (AMC)

Miguel: Wildheart. Miguel is now entirely in his own lane, and it's a wonderful place to drive: Plush, sensuous soundscapes in which you can get delightfully lost. (RP).

Mint Condition: Healing Season - What could've been a dry and regurgitated sendup of dusty holiday standards was instead expanded upon with mesmerizing and modern takes on generational yultide favorites, as well as new songs like the soothing and spirit-infused title track that reinforces the duty of mankind to embrace one another, build bridges beyond the past and to learn what truly matters beyond the season. (MC)

Teedra Moses: Cognac & ConversationThis is a project that represents the best of what the marriage of R&B with hip-hop production techniques can provide. It’s not just that Moses refuses to excise the soulfulness from her vocals in an effort to appeal chase trends, the lyrics heard on Cognac & Conversation answer the call from many soul music fans for music that “has something to say.” (HD)

Jill Scott: Woman- Sassy, sophisticated and brimming with the wisdom of a sister that's lived and loved and is willing to share the lessons of it all: "Closure" demonstrated a "think-like-a-man" approach to getting 'one for the road' after a breakup, "Fools Gold" is a wistful dismissing of a less-than-ideal companion and "Prepared" taught us that under the glitz glamour and poise, she's still like the rest of us.....learning as she goes along. (MC)

Antonique Smith: Love Is Everything: This is a beautiful follow up to her Grammy nominated single “Hold Up Wait A Minute (Woo Woo).” I surely wish this was an entire album at which to marvel. Her cover of The Beatles`“Here Comes The Sun” is superb and one of my favorite cuts this year. (AMC)

Soulpersona: Momentum - In a year of phenomenal single producer compilation projects, Soulpersona’s stood out as among the very best. With a roster of ridiculously talented singers, this contemporary R&B under Soulpersona’s capable hands winks at the dance, soul, and funk of the ‘80s without residing there. (LMG)

Jazmine Sullivan: Reality Show - There may be nothing more captivating than watching a girl coming into her grown woman, especially when that woman is a talented girl you’ve been watching evolve as an artist since she was a teenager. With hip hop soul, traditional R&B melodies, near peerless vocal acumen, and bold first person perspective narratives that held each of its dark, unsung characters with deep empathy and regard, Sullivan delivered what was the first perfect album of her storied career and an instant canon classic. (LMG)

Tuxedo: Tuxedo—Ultra-cool without being pretentious or overly slick, this boogie-licious collaboration between vocalist/DJ/arranger Mayer Hawthorne and hip-hop producer Jake One brings the sounds of homegrown 80s and ‘90s synth-funk to the forefront in a way that listeners of all demographics can appreciate. (JK)

Tyrese: Black Rose - With full throated wails and stripped bare vulnerability, Tyrese shed his classic ego and persona and came through with the singular album of his career, delivering the mainstream the classic soul it had been missing and making a bold statement on the state of the industry in one fell swoop. Bravo! (LMG)

Kamasi Washington: The Epic - Anyone who says jazz is dead hasn’t been paying attention to the modern jazz revolution happening out of the West Coast, and none was bolder and more electric than this three-disc album that lived up to its name. (LMG)