Today in Music History: The soul group The Manhattans was formed 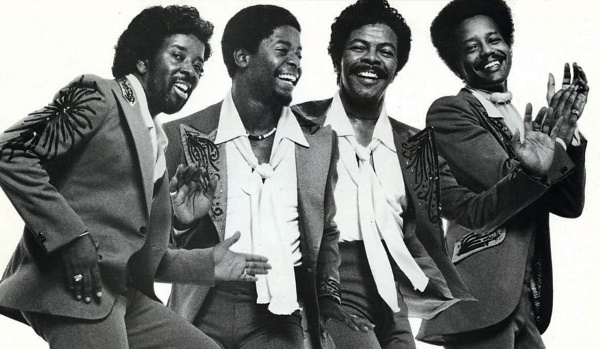 On this day in 1962, one of the all-time great vocal groups became a reality: The Manhattans were formed in the early 60s in New Jersey as a quintet led by writer/bass vocalist Winfred "Blue" Lovett and emotive lead singer George Smith, along with Edward "Sonny" Bivins, Richard "Ricky" Taylor and Kenneth "Wally" Kelly. They performed together in high school, but didn't really focus on a career in music until they had all had just returned from service in the armed forces.

On this day in 1962, one of the all-time great vocal groups became a reality: The Manhattans were formed in the early 60s in New Jersey as a quintet led by writer/bass vocalist Winfred "Blue" Lovett and emotive lead singer George Smith, along with Edward "Sonny" Bivins, Richard "Ricky" Taylor and Kenneth "Wally" Kelly. They performed together in high school, but didn't really focus on a career in music until they had all had just returned from service in the armed forces.

Performing locally with success, they were signed by the small Carnival label and had minor national success on the strength of some solid recordings (their version of the country tune "From Atlanta to Goodbye" was a gem). Their moderate late 60s work gained the attention of Columbia Records in 1970.  Unfortunately, their Columbia signing coincided with the sudden illness of talented lead singer Smith.  During a tour through North Carolina, the Manhattans came upon a college student with an amazing Sam Cooke-like voice.  Recognizing the incredible talent of this 21 year old, the group invited Gerald Alston to join, and he became the lead singer who would bring stardom to the quintet, with the blessing of Smith, who sadly died just a few months later.

With Alston's smooth lead vocals, solid songwriting talent within the group and the always wonderful work of Philly producer/arrranger Bobby Martin, the Manhattans began to score on the R&B charts, putting out a string of fairly traditional ballads that became Soul hits.  Then in 1976, the quintet released Lovett's composition "Kiss and Say Goodbye," a song originally written with country star Glen Campbell in mind, but which instead become the group's signature tune.  "Kiss" rocketed to the top of the R&B and Pop charts, and moved the group to the upper tier of R&B acts.  And the companion self-titled LP became the first of several top notch albums that the group released in the 70s. But the long awaited success also became the sign for Taylor that he should retire the group to follow his religious path in Islam, leaving The Manhattans as a quartet.

The next ten years were a decade of success upon success on the R&B charts, with The Manhattans staying true to their roots as soul balladeers, even as many peers were chasing trends. Great singles such as "It Feels So Good to be Loved So Bad," "I Kinda Miss You," "We Never Danced To A Love Song" and "Am I Losing You" kept the group charting, and the Manhattans' late 70s albums It Feels So Good, There's No Me Without You and Love Talk, were among the decade's best.  Love Talk was perhaps the Manhattans' greatest disc - though not their most popular - a near-perfect adult Soul album that sounds as great today as it did more than 40 years ago.

Just when The Manhattans' pop crossover days seemed behind them, in 1980 they again surprised the music world, hitting the Pop top 10 againwith their loping 1980 ballad, "Shining Star." While that monster smash became their last major pop hit, The Manhattans continued to record through the 80s, hitting on the Soul charts with such hits as "Crazy" and "Honey Honey."  Feeling that they needed a change for 1986 disc, Back To Basics, produced in part by Bobby Womack, The Manhattans recruited their first female member, the fresh-out-of-college vocalist Regina Belle, who shined on the duet "Where Did We Go Wrong," and helped lift the album to a critical favorite, though unfortunately not a big seller.  By that time, the Manhattans' smooth, adult soul style seemed out of place amid the frenetic, electric funk sounds dominating late 80s music, and they were dropped by Columbia in 1987, even as Belle began her memorable solo career with the label.

Gerald Alston left the group for a moderately successful solo career in 1988, and was replaced by former Cameo vocalist Roger Harris.  The group's 1989 Sweet Talk album on small Valley Vue Records stiffed, and Lovett left the following year for medical reasons. Kelly left the group to pursue teaching (he had a degree in Biology). With the group's most visible members gone, founding member Sonny Bivins reconstituted the group with Harris and some new members and continued touring, ultimately landing a record deal with Hektoen Records for 1994's Manhattans Now LP.  A number of personnel changes occurred after that, but the Bivins-led Manhattans continued to perform internationally in multi-act soul music shows for nearly two decades, until he disbanded it for health reasons. Sadly he died in 2014. In 1993, in time for a 30th anniversary of the group's founding, Alston recruited a healthier Blue Lovett to bring the group back together. Kelly passed on the reunion, so the twosome added David Tyson (brother of the Temptations' Ron Tyson) and Troy May to form a more familiar version of the Manhattans (often billed as "The Manhattans Featuring Gerald Alston and Blue Lovett").  That version of the act toured extensively in multi-group Soul music shows and recorded a very good "Live in South Africa" album in 2000.

The Alston-Lovett version of the group, along with and producer Ted Perlman (former musical director for Stephanie Mills), gave soul music fans a wonderful surprise in 2002 with the studio album Even Now.   Perlman brought a great batch of new material and some top-drawer backing musicians to the disc, including Billy Preston, Gerald Albright and Chicago's horn section.  Even Now was well worth the long wait for Manhattans fans, and was highlighted by the beautiful "Nites Like This," a smooth jazz cut that was one of the year's best singles, and the stirring ballad "Turn Out the Stars," which became the group's biggest hit in nearly two decades.

In 2008 they returned with the beautiful Al Johnson ballad "Men Cry Too," which was originally recorded in the Even Now sessions, as part of a reissued, expanded version of Even Now titled Men Cry Too.  It was a memorable addition to an already strong album and made the reissue a must-find for the group's sizeable fanbase.

In February, 2014, the Manhattans were featured on the TV One biography show, Unsung. Sadly, in December of 2014, both Blue Lovett and Sonny Bivins died, and original member Kenny "Wally" Kelly soon after, leaving Gerald Alston as the lone surviving member of the most popular version of The Manhattans. He continues to perform with Tyson and May, touring the world and occasionally recording -- and they sound great. They are ably continuing the legacy of those five men who first came together on this day in 1962.