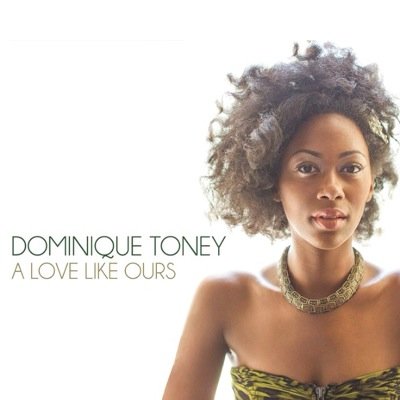 Click on CD cover
to listen or purchase
https://www.amazon.com/Love-Like-Ours-Dominique-Toney/dp/B00MJ1VIK4/ref=as_sl_pc_tf_til?tag=soultracks-20&linkCode=w00&linkId=ZJ5EO7QTY7KZZF4P&creativeASIN=B00MJ1VIK4

It’s accurate to call vocalist Dominique Toney a Renaissance woman. Toney, a native of Los Angeles, is the daughter of highly accomplished pianist Kevin Toney, who played keyboards for The Blackbyrds, and Phyllis Toney, a costume designer who outfitted Paul McCartney, Diana Ross, Sting, Areosmith, just to name a few. Dominique’s upbringing means that her parents raised her steeped in the arts: Dance lessons began at four and classical piano training started at age six, to be followed by theater classes. Dominique then went across the country to study at New York University, where she also cultivated her interest in racial issues, religion and politics.

Toney’s interest in those “third rail” topics eventually led her to join an improv sketch comedy troupe called Political Subversities, and her self-written and self-produced skit “Lemonade Stand” shows that she has keen political insights about the economic realities facing the poor and middle class and a sharp satirical and comedic wit. Toney might have a career writing for “The Daily Show” or “Saturday Night Live” if the music thing doesn’t work out.

For now, however, Dominique Toney plans to see just how far she can go singing urban adult contemporary love songs, and she delivers plenty on her debut, A Love Like Ours. UAC might be a tough sell in the increasingly youth oriented and hip-hop dominated R&B market, and that likely explains some of the choices that Toney made on this solid collection of ballads, mid-tempo love songs and dance tunes.

“I Just Don’t Know,” which features Toney in a duet with rapper Lebrese Black, is the story of a woman hesitant to take the relationship plunge even as the rapper implores her to go for it. The song is club ready right down to the deep bass, programmed drums and synthy violins. Toney proves that she knows what sounds hot in the club, and her vocals are more than up to the challenge of handling the up-tempo material. However, Black’s rap -- backed up by those synthesized violins -- bogs the track down.

Toney is on stronger ground when she stands alone vocally on cuts such as “We Are,” and on the jazz infused tunes “I Can’t Take That” and “The Last One.” “We Are,” like most of album’s material, is co-written by Toney and her dad, and finds the singer trying to understand her man’s erratic behavior when he gets around a circle of friends that she would rather avoid.

A driving acoustic bass propels swinging rhythm of “I Can’t Take That,” a song that tells the story of a lady doing a post mortem on a relationship that she took more seriously than her lover. This track showcases Toney’s ability to switch tempo vocally from a swing delivery that showcases her jazz phrasing and intonation to the R&B style she brings to the song’s hook. Her dad’s piano solo brings another nice touch of jazz.

Toney reaches her creative height on “The Last One,” which is the strongest track on A Love Like Ours. The cut fuses a jazzy bass, drum, piano and guitar sound with 1960s era girl group vocals right down to the backing harmonies. It tells a story of unrequited love from the standpoint of the person holding out. “Lord knows he tries to be the one/I tried to let him know this is all for fun/Honest from the get/That’s my policy/He didn’t listen/Now he’s angry.”

The polish, confidence and maturity that Dominique Toney brings to A Love Like Ours reflects her broad experience as well as the blessings of having parents in the business. The latter is not always a blessing, especially if the children bring a sense of entitlement or the parents have their own issues. But that’s not the case with Toney, who clearly took the proper lessons from all of her teachers. She delivers an enjoyable and varied debut album that establishes her as a new artist to watch. Recommended