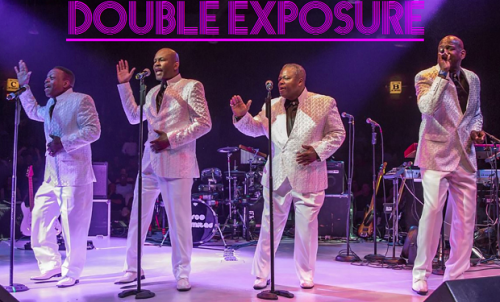 One of the stalwart acts of the Salsoul music label in the 70s, Double Exposure was a fixture in the clubs with a bevy of well performed, melodic tunes that bore the classic Philly Soul sound and hot dance beats. Originally formed in the early 60s as United Image, Leonard Davis, Chuck Whittington, Jimmy Williams and Joe Harris played local parties and talent competitions, becoming one of the rising soul groups for the city.

In 1968, the group members reunited after splitting for a bit due to military service. They cut some tracks for the legendary Stax label, including the minor hit “Love’s Creeping Up On Me.” But problems at Stax led the group to search elsewhere, and they found a new home at rising label Salsoul Records, also changing their name to Double Exposure in the process. The group began working with Philly's top musicians, such as Bobbi Eli, Baker/Harris/Young, Larry Goldon and Bunny Sigler. They issued a trio of albums in the late 70s that didn't burn up the pop or R&B charts, but provided two number one Disco hits ("Everyman" and "Ten Percent") and another top 5 charter ("My Love Is Free").

By the early 80s, Double Exposure left Salsoul and began recording for the small Gold Coast label, hit the charts with the single “After All This Time.” With the changing musical landscape and radio exposure waning, the group split in 1985, and Williams joined the Trammps for several years.

2007 brought Double Exposure back to the studio, issuing the song “Soul Recession” with Bobby Eli. This led to the original four Double Exposure members reuniting in 2010, again performing shows around the world. In 2012 the group recorded a new single, "Lady."

Group member Chuck Whittington retired from performing due to illness in 2016, and Jimmy Williams died. They were replaced by Kenny Pitt and Lorenzo Bell, resulting in the current version of the group consisting of Davis, Harris, Pitt and Bell. They continue to perform regularly and sound great.