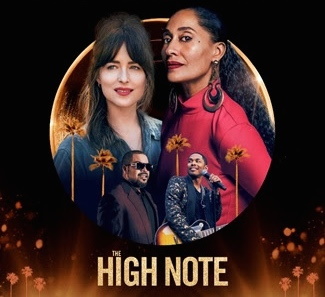 Telling a riveting story through a music-centered film can be a daunting task. Telling two stories that merge successfully is an even steeper challenge amidst the work of pulling in viewers with fresh original songs and colorful musical performances. Many flicks of this variety dazzle with impressive concert sequences while failing to establish any crucial plot development.

Telling a riveting story through a music-centered film can be a daunting task. Telling two stories that merge successfully is an even steeper challenge amidst the work of pulling in viewers with fresh original songs and colorful musical performances. Many flicks of this variety dazzle with impressive concert sequences while failing to establish any crucial plot development.

The High Note, newly released on DVD and Blu-Ray, has the opposite problem. A tale of the struggle to move forward professionally and artistically in an industry with unwritten ageist standards for women, its compelling story lines are executed engagingly by lead actors Dakota Johnson, Tracee Ellis Ross, Kelvin Harrison, Jr., and Ice Cube. It fails, however, to cement the musical depth or stage presence of famed vocalist Grace Davis (portrayed by Ross) and how this has led to her iconic status with her personal assistant, Maggie Sherwoode (Johnson) and millions of loyal fans.

Ice Cube, in the role of Grace’s longtime manager, Jack Robertson, is a big draw for The High Note. Perhaps because he’s one of the few cast members with longstanding first-hand experience in the music business, his portrayal of a cold-blooded industry veteran who places the bottom line over all else is bitingly believable. This allows the starry-eyed ambition of Maggie to shine through, while providing for an enticing friction stemming from the career crossroads at which both she and Grace find themselves.

Flora Greeson’s script strikes a reasonable balance in the embodiment of Grace as an artist who is learning to accept the limitations imposed by higher-ups in the recording industry, but with an underlying desire to break through those barriers. Ross carries out these elements with a convincing delivery entertaining in both sharp diva antics and moments of personability and vulnerability. Unfortunately, her vocals and mannerisms in the few performance numbers of the film fail to relay the impression of the superstar she is intended to characterize. Johnson is plausible in emoting Maggie’s struggle between catering to her boss’ whims and a deep-seated desire to lend her self-cultivated production approach to get her out of an artistic rut. The premise of her lack of experienced compensated for with unbridled enthusiasm comes across as more credible than Grace’s stature.

Although not among the top-billed performers in the film, June Diane Raphael (of Grace and Frankie fame) stands out in her treatment of Gail. Her character’s exact role in Grace’s world is never clearly explained, but her superiority to Maggie is blightingly palpable in both dialogue and edgy nuance. Raphael’s outtakes in the extended and alternate scenes contained in the DVD and Blu-Ray extras are particularly fun. She would have made a nice addition to “The Grace Davis Story” and “Inside the Creation of The High Note,” bonus features which fall victim to the Hollywood syndrome of the contributors lavishing praise on one another without ever shedding any additional light on the back stories of their characters or their personal connections to them.

In an era in which time-tested tales of the struggles of larger-than-life performers are few and far between, The High Note is a welcome feature. The juxtaposition of a young hopeful with a battle-scarred pro is presented in an absorbing fashion by way of practically intertwining plot points. Director Nisha Ganatra mentions in the DVD/Blu-Ray extras that she never heard Ross sing before casting her, which might explain some of the movie’s shortcomings in the chief area of music performances. Still, for fans of Ross and musical dramas at large, it has a pleasing dynamic range of hurdles and twists to warrant at least one viewing. A healthy dose of suspension of reality is simply required, given the shortage of evidence in song to support the premise of its chief character’s standing.