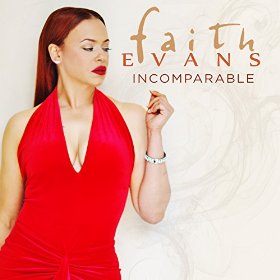 Click on CD cover
to listen or purchase
https://www.amazon.com/Incomparable-Faith-Evans/dp/B00OPK1G2W/ref=as_sl_pc_tf_til?tag=soultracks-20&linkCode=w00&linkId=252TV5FXZCRM64F4&creativeASIN=B00OPK1G2W

It happens with the best of them: artists who once took great pains with a distinct sound that earned fans and acclaim get mired in minutiae (professional or personal), lose focus and find themselves spinning wheels instead of dropping hits. Some crooners tumble into obscurity or find themselves scrambling in the "throwback circuit" while others get back in the groove with a vengeance, making listeners stan them all over again for rejuvenating what earned the "heavy rotation status" back in the day. Fitting the latter description and one of the latest performer to grapple with a creative wheel-spinning or sorts, to the surprise of many, was Faith Evans.

A divorce and a series of post-Bad Boy label changes seemed to leave the songstress grappling for a muse (evidenced in 2010's uneven Something About Faith). Until R&B Divas (the reality series and soundtrack), many wondered if she would hit the early 1990s/2000s quality levels again. So Incomparable doesn't just mark Faith's full-on return to music, it also combines the energy of her 1995 self-titled debut and the inventiveness of 2001's Faithfully to create one of the musical must-haves of a dwindling 2014.

From beginning to end, The Notorious F.A.Y.E. packs Incomparable with sophistication, sex appeal and soul. Executive producing and co-writing on every track except one, Evans harnesses the skills of Mike City, Ben "Bloc" Briggs, Chucky Thompson, Jimmy "Gittum" Rogers and even her own daughter Chyna to lace up a satisfying set of jams. Some have added dimension thanks to sampling, such as Aretha Franklin's "Young, Gifted And Black" heard in the anthem-worthy dating declaration and first single, "I Deserve It," as well as the "California Dreaming"-esque feel of "Fragile": "I need to know if you love me like you say you do....can I trust you with my heart?" is the plaintive plea that she juxtaposes over the brash horns, marching percussion and vintage 'doo-wop'-style arranged vocals.

But the majority of Incomparable speaks to the cyclical nature of love and lust, a journey Ms. Evans is presently navigating as a single divorcee. The mid tempo "Really Wanna Do" recalls the straightforward carnal cool of an 80s-era Cameo or Mtume joint, matched in intensity level by her tangy duet with former TV One co-star KeKe Wyatt, "Make Love." Undulating, bursting with bass and soaked in sensuality, few will find problems with their requests ("Baby come over cuz' I wanna make love/baby just tell me if I'm asking too much") or KeKe's giddy-slash-goofy vocal runs closing out the entreaty. But nothing beats the "keep-it-real" blues-flavored exit strategy of a song, "Thank You Goodnight"; "Not trying to be rude but I can't break my rules/....I guess I'll say 'thank you, God bless you, and goodnight." (Well DAMN.)

Basically, everything fans were missing from Faith's last two releases is available in abundance here: appetizing interludes, dance-floor and roller-rink-ready joints ("Good Time") and even a feel-good gospel revival with the renowned Karen Clark Sheard and B. Slade, "Paradise." Jazmine Sullivan's devotional, "He Is," takes Faith's choir-cultivated soprano to dizzying depths and even the old underground demo, "Maybe," is polished up and receives, in the paraphrased words of Tamar Braxton, brand new life.

With Thanksgiving to soon become a memory and Christmas right around the corner, Faith Evans' Incomparable provides a lasting treat for the Faithfuls and reinforces her rep as one of this era's most essential performers. That enviable range, galvinizing grasp of melody and engaging approach to the genre all add up to one truth: after nearly 20 years since her Bad Boy debut, Faith is notorious in her own right and yes, Incomparable indeed.  Enthusiastically Recommended.