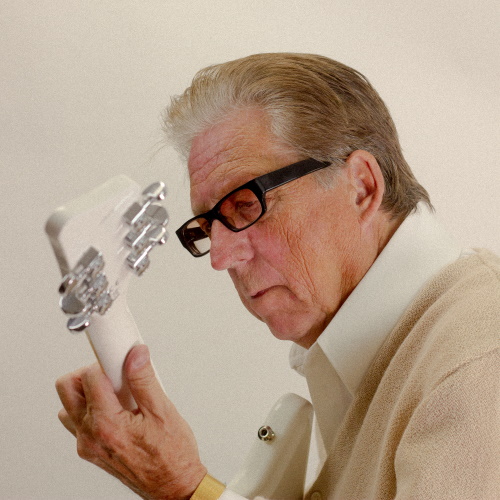 (May 20, 2022) The musical renaissance of veteran Chicago musician James Holvay, which began with 2021’s soulful delight Sweet Soul Song, continues with the June 24, 2022 release of a new five-song EP, This Girl, on his own Mob Town Records label.

Known to his fans as “Jimmy Soul,” singer-songwriter-guitarist-producer Holvay established a formidable rep on the Windy City music scene during the ‘60s, as the co-founder of the horn-based band The MOB — the major inspiration for another popular local act, CHICAGO — and as the author of the Buckinghams’ chart-topping national hit “Kind of a Drag” and three other top-20 hits by the group.

(May 20, 2022) The musical renaissance of veteran Chicago musician James Holvay, which began with 2021’s soulful delight Sweet Soul Song, continues with the June 24, 2022 release of a new five-song EP, This Girl, on his own Mob Town Records label.

Known to his fans as “Jimmy Soul,” singer-songwriter-guitarist-producer Holvay established a formidable rep on the Windy City music scene during the ‘60s, as the co-founder of the horn-based band The MOB — the major inspiration for another popular local act, CHICAGO — and as the author of the Buckinghams’ chart-topping national hit “Kind of a Drag” and three other top-20 hits by the group.

Absent from the music scene from four decades after the dissolution of the MOB, Holvay drew fresh inspiration from Amy Winehouse, Sharon Jones, and other young neo-soul musicians when they appeared early in the new millennium. He recalls, “I went, ‘Wow, what is with this?!’”

Over the course of the last decade, Holvay returned to penning material in the style of his own musical role models: Chicago-bred R&B talents like Curtis Mayfield, Gene “Duke of Earl” Chandler, and Major Lance.

Sweet Soul Song, the first fruit of a renewed burst of writing and recording activity, met with universal critical kudos for its knowing grit and deep-soul feeling. “Another soul veteran makes a great comeback,” raved Blues & Rhythm magazine, adding, “These songs could have been recorded in Chicago in 1965.” Jeff Burger wrote in the Seattle Post Intelligencer, “If vintage Chicago soul has a place in your heart, you need these tracks.” The Chicago Jazz.com called the music “a vital five-song slab of authentic Chicago-style soul music.”

This Girl arrives as a similarly styled excursion through Holvay’s classic soul roots, and finds the musician flexing his Mayfield-styled falsetto on three new original numbers and two memorable remakes of songs he wrote for the MOB with his band mate Gary Beisbier.

Holvay says of the latter numbers, “I thought, why don’t I mine some of the better MOB songs that I personally like, and redo them the way I wanted them done in the studio? I wanted to pick out the best stuff that I had and put it on the second EP.”

He continues, “Although Jerry Ross of Colossus Records did an excellent job in recording ‘More of You.’, it was different than the way we used to do it. The song is very Chicago soul, very Jerry Butler, in that whole bag. The same goes for ‘She’s Gone Away’. I recut that because that was one of our best ballads. I used to sing that song in the show.”

The new collection is rounded out by three new Holvay originals, “Hot and Heavy Love,” “This Girl,” and “Whatever She Wants." The first of these is a driving number, with a definite Curtom feel to it. James tells us, "The idea for the song has been in my head for a long time. Years ago, I made a demo of it using computer based instruments and sent it to Tony Horn in the UK. At the time, Tony published a magazine called “Soulin.’“ Tony managed to get the first version of it on an internet station called 24-7 and it charted at # 10. I always liked the song and kept it close at hand. When it was time to work on the second EP, I felt it was time to resurrect “Hot n’ Heavy.” I polished it off, changed a few things and did the tune the way it should have been done the first time around. I used all live musicians, rhythm section, horns and strings. I love the way it came out. This is the definitive version of the song.All the same fellas played on “Hot” that played on all the tracks, which are listed on the EP.  When the musicians tell you, “James, This is a great song”, you know you’ve got something special."

“It took me literally two years to find guys who could play the music,” Holvay recalls. “These are the road dogs — they go out with the O’Jays and the Temptations when they tour. The bass player’s main gig is in Al McKay’s Earth, Wind & Fire. The drummer is currently out with Robert Cray. They work with all those acts, so they are masters of that music.”

“Duane Benjamin, the horn and string arranger, is also a trombone player and has played with Michael Jackson, Diana Ross, Marvin Gaye, Aretha Franklin. He’s done strings for every R&B star in the business.

The horn parts he writes are right on, too. I can tell him, ‘This is like an Impressions type tune,’ and he says to me, ‘I know exactly what you want.’ I can tell all these guys, ‘This is the groove,’ and bam!, there it is.”

As on the previous release, the recordings on This Girl were carefully built from the ground up, instrument by instrument, by Holvay, engineer Steve Cohen, and mixer Cameron Lew.

“I record the basic tracks in Steve Cohen’s studio, Lake Transfer, in North Hollywood” Holvay says. “He lays down a click track so that, as I bring in musicians, the time will be right. I’ll sit on the mic, sing a work vocal and play the guitar. Steve finds the right tempo. I may add a scratch bass line, because I also play bass. Then I bring in Stu Pearlman on the keyboard.”
“In order to get that Morris Jennings (Chicago soul session drummer), we cut the final drum track in the kitchen at my house — Steve happened to be over at my house one day; we were in the kitchen, which is tiled and has a high wooden ceiling, and after I described the sound I wanted, he clapped his hands and said, ‘You know, this would be a cool place to cut your drums.’ I said, ‘Can you do that?’ And he said, ‘Yeah,” and Les Falconer recorded the drums on Steve’s laptop in my kitchen.”

The elegant string and horn arrangements on This Girl were crafted in the classic manner of the noted Chicago R&B arranger Johnny Pate. “I sent MP3s to Duane Benjamin. He booked a big studio, Echo Bar, out in North Hollywood, and the strings and horns were recorded there. We used six strings, and we doubled them, and two trombones and two trumpets, and we doubled those. That’s why it sounds so fat.”

A lot of time and effort went into the creation of the sound heard on This Girl, which some might consider “old school.” But it’s also as modern as yesterday: Anyone who also cocks an ear to contemporary radio will be immediately struck by the similarity between Holvay’s music and “Leave the Door Open,” the 2021 smash hit by Silk Sonic, the hot neo-soul unit fronted by Bruno Mars and Anderson.Paak.

Perhaps unsurprisingly, Holvay learned that there is just one degree of separation between his music and Mars’ during a chance encounter with the young star in a Sherman Oaks restaurant a few years ago.

Holvay recalls, “One of the members of the MOB was Little Albert Maligmat, who was later in the Society of Seven. They were from Hawaii — they were the big show band over there. Bruno, who was born and raised in Hawaii and like Albert is from a Filipino background, said, ‘I was supposed to take Little Albert’s place in the Society of Seven. He was my idol.’ Then later he hooks up with Anderson.Paak, and they’re doing vintage soul music!”

He adds, “The fact that Silk Sonic was recognized for record of the year and song of the year at the Grammy Awards this year really legitimized the music that I’m doing and the music of anyone else doing something similar.

The Recording Academy said, ‘People like this music, and it’s valid today.’ It’s not just some guys trying to bring back the past.”