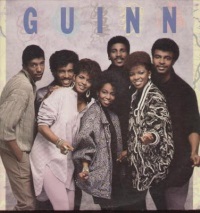 Guinn was a family act consisting of siblings from the North side of Philadelphia. Earl, Randy, Bonnie, Michael, Skip, Marjorie and Lori recorded a single album for Motown in the mid-80s that was unfortunately lost in the dysfunction of the label at that time. The album deserved a better fate: attractive vocals and a nice selection of songs set the tone for Guinn.

Ultimately the sole Guinn album was best known for the single "Dreamin'," which went nowhere on the charts for the Guinn family but later became an across-the-board smash for Vanessa Williams.

For fans of worthwhile lost 80s R&B music, add this group to your list.