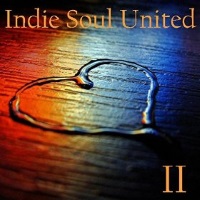 Click on CD cover
to listen or purchase
https://www.amazon.com/Indie-Soul-United-Various-artists/dp/B00N63R344/ref=as_sl_pc_tf_til?tag=soultracks-20&linkCode=w00&linkId=2IFTJ44LE5PQP6MW&creativeASIN=B00N63R344

The good thing about a compilation such as Indie Soul United 2 is that it intersperses familiar names with those striving to make a mark in the indie soul world. This latest project from producer Craig Alan Eleazer features mainstays such as Ty Causey, as well as other names that came across my desk over the years such as Athene Wilson, Donald Sheffey and Laurone McClendon.

The good thing about a compilation such as Indie Soul United 2 is that it intersperses familiar names with those striving to make a mark in the indie soul world. This latest project from producer Craig Alan Eleazer features mainstays such as Ty Causey, as well as other names that came across my desk over the years such as Athene Wilson, Donald Sheffey and Laurone McClendon.

Then there are the names that don’t ring a bell but who possess talent that demands a closer look. A project such as Indie Soul United 2 and its predecessor compel listeners to give those emerging voices a listen because I’ll be first one to admit that as much as I complain about terrestrial radio’s tight, repetitive play lists, it’s real easy for me to get stuck on Eric Roberson or Liv Warfield. And while I make the choice to keep “Why Do You Lie” on heavy rotation, that choice still comes at the expense of another great tune by another worthwhile artist.

The performers featured on Indie Soul United 2 to stick to the tradition of making smooth, adult oriented soul and R&B music, and the tracks address a need that hard core soul lovers believe often goes unmet. Those who slip a CD into their player or play these tracks on their mobile phone will also be able to discern a couple of themes that emerge on Indie Soul United 2.

This ballad heavy project definitely responds to the criticism that most of what is heard in the mainstream arena lacks romance. Seven of the 11 tracks on Indie Soul United 2 are either mid-tempo ballads or straight up slow jams, and the quality of those cuts shines through. The album features duet ballads such as “I’d Rather Say Good Morning” featuring the vocals of Sympli Whitney and Jason “Jay-El” Shorter. Causey shares the mic with Ashanti Munir on the jazz infused mid-tempo ballad “Yesterday.” “Seven Days a Week,” is a nu-soul duet that will be right on time for those who fondly recall the best work of Floetry in that the narrative alternates between the vocals of Whitney and the spoken word contributions of U-Meleni.

Another consistent theme heard in the music found on Indie Soul United 2 is that grown folks music is diverse: The disc includes the funky party anthem “Who’s Bumpin’ Old School,”  inspirational cuts such as “Every Day Every Night,” the cover of Stevie Wonder’s “Black Man," and “Lay Your Head,” a cut that brings listeners a real world look at romance. The latter track, a mid-tempo, bass driven number, has a story line that is to which many harried couples can relate - woman who gives her man space and comfort after he comes home from a hard days work.

“Every Day Every Night” is a tribute to the women who work in the home while also holding down another full time job and going to school. That’s the modern woman's life, and in a mainstream music world where women are portrayed as party girls or objects, Munir reminds listeners that women who “turn up” at home, on the job and in the class room are the rule rather than the exception. “Who’s Bumpin’ Old School,”  the album’s opening track, serves as a funky statement of purpose on an album where every track unapologetically honors the qualities that have always made soul music great: strong vocals, ballads celebrate romance, arrangements that feature solid lyrics and high quality instrumentation.

For those virtues, listeners can thank producer Eleazer, the constant who vision can be felt in those lyrics, arrangements and diverse vocal and instrumental talent heard throughout this enjoyable compilation. Recommended.