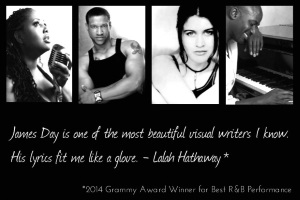 By DAVID NATHAN of SOULMUSIC.COM

James Day is an Internationally award-winning, Top 10 R&B songwriter, who received the Songwriters Hall of Fame Abe Olman Award of excellence from the legendary Hal David (primarily known for his catalog of classics with Burt Bacharach & Dionne Warwick.)

By DAVID NATHAN of SOULMUSIC.COM

James Day is an Internationally award-winning, Top 10 R&B songwriter, who received the Songwriters Hall of Fame Abe Olman Award of excellence from the legendary Hal David (primarily known for his catalog of classics with Burt Bacharach & Dionne Warwick.)

Decades since his grandfather gave him his first album, Natalie Cole's groundbreaking "Inseparable," the album which began his life-long love of soul music, Day is embarking on his most ambitious effort ever.  He has composed an album of songs with a Grammy Winning cast responsible for hits by Whitney Houston, Aretha Franklin, George Benson, Anita Baker, Chaka Khan, and yes...Natalie Cole.

The project is called STAND ON MY SHOULDERS and pays tribute to those who came before us and made sacrifices and contributions that have left our world a more beautiful place.  #SHOULDERS aims to honor, preserve and protect the art of songwriting and raise awareness about the "Songwriters Equity Act." Without this act, much of today's songwriting revenue has been eliminated: in the 21st century, production-based music using 'loops' & 'samples' prevails, with little attention to the craft of songwriting composition.  Gone are the days when the aforementioned writing teams, dedicated to songwriting as a legitimate art, earned almost their entire income from writing real songs.

The "Songwriters Equity Act" is designed to alter that situation so that writers can benefit from the thousands of plays their songs receive daily. #SHOULDERS  will donate a portion of the profits to the NSAI, the world’s largest not-for-profit songwriters trade association, established in 1967.  Their mission is to "protect the rights and future of the profession of songwriting, to educate, elevate, and celebrate the songwriter and to act as a unifying force within the music community and the community at large."  NSAI are committed, effective advocates for the "Songwriters Equity Act" and stand in support with songwriters of all genres of music.

Entering production stages, financial support has become essential for#SHOULDERS to continue. It will allow us to arrange and produce this stellar album of new compositions using full production values such as live strings, full brass and horn sections, and the key components that helped make so many of our historical recordings into modern-day classics.

As a sponsor, you will receive the album before it becomes available to the general public and there are a number of other great incentives for friends, fans, lovers of soul music, artists and art historians, and businesses who support the arts.  Please review the opportunities to become a part of this important new musical movement.  No donation is too great or too small. Thank you so much for your time and consideration.