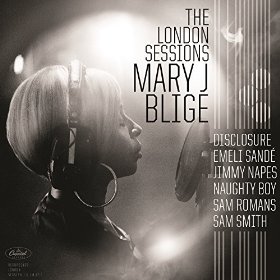 Click on CD cover
to listen or purchase
https://www.amazon.com/The-London-Sessions-Mary-Blige/dp/B00NO2TTQ2/ref=as_sl_pc_tf_til?tag=soultracks-20&linkCode=w00&linkId=TQA5CBQQPUXC6FKQ&creativeASIN=B00NO2TTQ2

She’s been needing a win badly in recent years where one album after another has managed to be consistently polished but middle of the road, and nobody wants a middle of the road Mary J. Blige. Blige is fire, grit, and urban passion born from pain and triumph. At least she was from What’s The 411 to No More Drama, and perhaps most especially on Mary and the hip hop soul magnum opus that is My Life. Then came the Iyanla Vanzant version of Blige and a series of label gimmicks (the now all but forgotten Love & Life Puffy reunion) and pop life-ish projects (nearly everything until the Think Like A Man soundtrack) that carried Mary J. Blige further into the mainstream, but also further from her base and roots.

She’s been needing a win badly in recent years where one album after another has managed to be consistently polished but middle of the road, and nobody wants a middle of the road Mary J. Blige. Blige is fire, grit, and urban passion born from pain and triumph. At least she was from What’s The 411 to No More Drama, and perhaps most especially on Mary and the hip hop soul magnum opus that is My Life. Then came the Iyanla Vanzant version of Blige and a series of label gimmicks (the now all but forgotten Love & Life Puffy reunion) and pop life-ish projects (nearly everything until the Think Like A Man soundtrack) that carried Mary J. Blige further into the mainstream, but also further from her base and roots. Technical imprecision with a blues truth gave way to mannered precision without heart as Mary grew in love, life, happiness and artistry into a mature and stable woman. Now revered as a music icon and at risk for being preciously treated as a commercially irrelevant veteran to be trotted out at awards shows for obligatory applause due to her past legend, Mary J. Blige was in need of a reboot. In some ways The London Sessions achieves that goal; in minor ways it is more of the middle of the road Mary we’ve grown bored with. The good news is that it’s more of the former than the latter as Mary becomes more dance diva than soul cry.

Whether you love this album, and it is a quality album, depends largely on what London conjures for you in musical expectations. If the idea is somehow grittier, grimier, more historical Northern Soul with Mary J. Blige belting in front of a wall of sound, then you will be disappointed. To be colloquial, ain’t not none of that here, not really. If London is that of hip, young soul pop artists like Emeli Sandé, Sam Smith, and Disclosure, who thread the needle between danceable pop and singer-songwriterly piano ballads sung with an eye on more of the technical and melodic than the soul-stirring, then BINGO! From top to bottom, this album delivers for you.

That Blige should turn to dance at this point in her career should be no surprise to anyone who has followed the trajectory of female artists of a certain age. Besides, Blige has been delivering soulful house and techno remixes for the clubs since her debut. So, the pairing of Blige with hot like chicken grease Disclosure is almost a given; the only commercially calculated production choices missing from this album were Mark Ronson and David Guetta, truly.

For you ‘80s and ‘90s clubbers old enough to remember when whistles, tambourines, and church claps were not out of place on dancefloors, “Follow” is the kind of throwback soulful house joint that will have you hailing Mary as the Queen of more than just hip hop soul. Disclosure is two for two with “Right Now,” another percussion banger for those who loved the merger of hip hop beats and dance progressions that briefly came together for a moment in the sun before gangsta rap took over and everything before it was considered, for lack of a better phrase, “too soft.”

Rodney Jerkins hands Blige a big techno house anthem that vocally opens in such a way that you can’t help but wonder if “My Loving” was meant for Michael Jackson’s Blood on the Dancefloor album. Its synthy heights and astral propulsions are also the closest you’ll get to Mary belting against a wall of sound. All three are winners for the club and even for a quick pick me up. With “Pick Me Up” (see what I did there?) and “Nobody But You,” nearly half of the album’s 12 tracks are devoted to early to mid-‘90s dance grooves that wouldn’t have been out of place with Black Box and C&C Music Factory.

While Blige is front and center and co-writing on every song, she’s not without a rack of co-writers who leave their indelible mark on the project. James Napier aka Jimmy Napes, who is enjoying celebrity as a contributor on Disclosure’s Settle and his own co-writing and producer run of three #1 UK hits, including Sam Smith’s “Stay With Me.” The other is Sam Romans of Naughty Boy fame. Respectively, Napes and Roman serve as the primary collaborators throughout The London Sessions, with each credited on five songs. Both Blige collaborators are never less than A-list competent in creating for Blige and have major moments on the project. However, the ballads like Napier’s co-written “Worth My Time” and “Not Loving You” can lean more toward schmaltz than a sincere blues. Meanwhile, angry, modern pop fare like “Long Hard Look,” which Romans co-wrote with a small army, may lyrically sound like Mary, but everything else about it is the typical and uninspired sound of every current pop diva.

Pop anthems like “Doubt” may feel like a watered down Blige from the round the way girl whose edge was once indisputable, but Romans eventually helps Blige find some soul in the reflective defiance of this survivor’s victory song. For his part, the Napier’s co-written collabo with Smith and Matthew Coleman on their four-on-the-floor disco thump of “Nobody But You” further illustrates why he and his team are quickly becoming the industry go-to guys.

“A Whole Damn Year,” the second single and standout soul ballad on the album, was co-written by the only woman with whom Blige collaborated on this project, Emeli Sandé, who also put her foot in the horn and bass club banger, “Pick Me Up.” With a surprising beat that could have been created by Timbaland and a sooty feel as gray as a Seattle day, on “A Whole Damn Year,” Sandé and Blige capture the struggle of recovery from a broken heart or worse…a physical trauma. It is Mary bare and raw, without clean up or gimmick, and everything we love best about Blige. Singer-songwriter Sam Smith’s greasy spiritual, “Therapy,” was a fitting first single and the closest to a retro-soul cut to be found on The London Sessions. It fits Blige in a way that feels effortless and a natural progression to songs done earlier in her career like "PMS" from No More Drama and “All That I Can Say” from Mary; songs that borrow from the rural black church traditions, but are decidedly urbane too.

The Sandé collaboration in particular shows that Mary’s still has some of the pain and pathos that made her so beloved from the streets to the suburbs in the first place. Other songs like the acoustic mediocrity of “When You’re Gone” and the limp-wristed “Not Loving You” reveal both the limitations of Mary J. Blige’s instrument and an ill-advised pop direction that continues to weigh down the Blige legacy and comeback. Hopefully, the new commitment to a dance direction will make up the difference; collectively they’re certainly blazing enough to strike a flame for Blige to burn her way back to the top of the charts. Recommended.