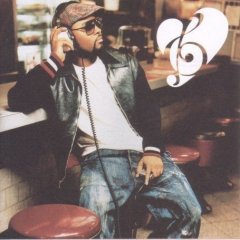 When a musician has been fortunate enough to release multiple albums, there are fine lines to tread with care if they wish to remain respected (or at least relevant) in the biz: contentment versus complacency, staying in the lane versus stagnating in the game. This was the crossroads Musiq Soulchild found himself at recently---2007's Luvanmusiq, his first new release since 2003's Soulstar, was his first on his new label and warmly received, but thanks to a widening perspective and appreciation for other genres, the 31-year-old wanted to diversify his style for the fifth go-'round, OnMyRadio.

A crisp and concise listen at just 12 tracks, Radio offers a smorgasboard of influences, thanks to its assortment of co-writers and producers (including Warryn "Baby Dubb" Campbell, Dru Castro and BlackKeyz). Musiq penned lyrics on every track, and his cool, conversational tenor glides throughout: there's the irresistible "backagain," chiding an ex who made a grand exit, only to reappear for a fruitless encore. "special" recalls that heady sensation that new couples share, and then there's "moneyright," a club-ready ditty that recalls the energy of John Legend's "Greenlight" and promises a long-suffering sweetheart that her financial assistance during his lean times will be repaid ten-fold once he gets his come up.

Musiq doesn't skimp on the ballads either: "deserveumore" uses a lush, 70's-esque feel while he tenderly makes his case to remain the number one pick, and "dearjohn" is a reluctant, tear-stained farewell left for by a man who's too despondent to break her heart in person. "Ifyouleave," which pairs him with the incompable Mary J. Blige, doesn't beg the partner to stay, but promises a world of hurt if they opt to stand on the other side of the door.

There are a few stumbles now and then: "iwannabe" pairs him uneasily with Damian "Junior Gong" Marley.  The attempt is refreshing, but the reggae-flavored turn feels forced in the end, and it's hard to anticipate what he was thinking about when he recorded "radio," which sounds like an attempt to capitalize on the 'snap' music trend about three years too late and is awkward as hell to listen to. But that's what the 'skip' button is for, right?

Anyone who first fell for Musiq during his froed'-out "Just Friends (Sunny)" days will gravitate toward a number of tracks on Radio, and his willingness to think outside the box and put genuine effort behind it is what makes the CD a recommended one. It also proves, in the end, that using a different vehicle doesn't make the ride less smooth as long as its steered with capable hands.

"When someone reveals themselves to you, believe them."  Maya Angelou