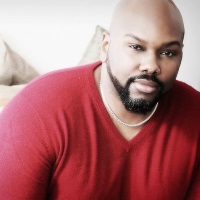 “I really get her going when I take out my big ten-inch…record of the band that plays the blues. She just loves my big ten inch…record of her favorite blues.” – Bull Moose Jackson’s “Big Ten Inch”

“I really get her going when I take out my big ten-inch…record of the band that plays the blues. She just loves my big ten inch…record of her favorite blues.” – Bull Moose Jackson’s “Big Ten Inch”

Risqué music has been around since the advent of rhythm and blues. Whether Bull Moose Jackson was boasting in the 1940s and ‘50s about his enviable manhood and telling the story of “Nosey Joe” shoving his big nose in ladies' “business” or LaWanda “Aunt Esther” Page sing-talking limerick homages to fellatio and anal sex in the ‘60s and ‘70s, this business of taboo subjects in urban music, often referred to as “baby making” music, is nothing new. Even back then, these before-mentioned artists were merely following their Jazz Age predecessors of Gladys Bentley, Bessie Smith, and Ma Rainey who also had blue material thinly masqueraded in double entendre for adult audiences. And yet, the difference between their material of old and today’s increasingly explicit R&B material was a level of cleverness, style and wit that seems to be absent when I hear what is supposed to be soul that, at least historically, was distinct from hip-hop in its restraint against coarse language and hyper-sexualized themes. There also is the simple matter of adult language encroaching on songs we once could play for the entire family and at major life events like prom, even when the themes were deceptively provocative in nature.

At 38, I increasingly find myself questioning if I’m just getting old and becoming my parents or has the bar for what’s acceptable in radio R&B fallen face first into the gutter? Mind you, being a member of Generation X means that I am of the hip-hop generation, one reared on Millie Jackson’s “F**k You Symphony” but who was also present and club-bopping to Adina Howard when “Freak Like Me” climbed the charts. In both instances, I’m sure older generations were clutching their pearls and sucking their teeth. I rocked DMX in the gym and thought L.L. Cool J and Big Daddy Kane were the ultimate lover men in their declarations of how they “get the job done,” they “work.” So, I’m no shrinking violet. Still, even I find that lyrics like Howard’s now relatively tame: “I want to freak in the morning/A freak in the evening just like me/I need a roughneck brother/that can satisfy me just for me” pales in comparison to the fast-selling newcomer K. Michelle and her latest lovely, “Pay My Bills,” which boasts such prayer cloth clutching lyrics as “I’mma put these legs behind my heads/throw these panties behind the bed/remember all that sh*t you said/no foreplay I’m already wet” before rapidly progressing to its family friendly hook “Imma f**k you/like I’m tryna pay bills/Georgia Power/Cable bill/baby sitter/tonight you will.” Uhm, yeah. Pop music’s lyrical bar is sizzling in Hades at this point.

Now those under 30 might dust off something like Marvin Gaye’s “Let’s Get It On” as a rebuttal that “we did it too” and are now “hating” on their X-rated fun, but upon closer inspection of the verses leading into Gaye’s hook of “Let’s Get It On,” one repeated until he’s begging more than Keith Sweat at a wet T-shirt contest (somehow Gaye manages to beg without ever looking like a sucker; I wish he could give lessons), reveals a song about giving yourself to someone out of love. It could even be read as a song about giving in to love, not lust, if you wanted to read its lyrics with more chaste lenses. But, that’s the beauty of the provocateurs of old; their work had

layered meanings and was open to interpretations that gave room for child safety and knowing nods among grown folks. There’s little to interpret about Jaheim’s “(Pu**y) Appreciation Day”: “So warm/so soft/it’s so tight/it’s the greatest/So I laid in it/played in it/stayed there ‘til daybreak/and then I tasted it/amazing like Krispy Kream glazed it/So baby you can have it your way/it’s pu**y appreciation day.” I could just imagine my mother’s face if this came on in the company of her grandchild. And that’s the point: Jaheim isn’t a “blue” artist or comedian, he’s a mainstream soul artist with radio airplay, and while one hopes this song isn’t slated as a radio single, it increasingly isn’t a stretch to imagine it glazing the air.

Call me old-fashioned, and many of you will, but there’s something emotionally enriching and connecting about hearing a song about love or intimacy that isn’t filled with coarse language, gratuitous expletives that seem to knock you in the face out of nowhere, or boast the porno level details of Tank’s c*mshot precursor on “When” (go look it up). At the very least, can we not have that lilting ballad about love’s glory or worse, how much you love Jesus, sit side-by-side with a song that might literally state “that ni**a ain’t sh*t.” I’m not even a church-going dude, and I don’t want to hear it, certainly not in the same mix. That’s what I once used hip-hop for. But, increasingly their boundaries are indistinguishable.  And, that’s a shame.

Why? Well, because contrary to popular belief among Gen X and their Baby Boomer elders, there are a lot of talented young voices and writers out here. K. Michelle actually can sing and when she pens a song like “I Don’t Like Me,” you know there’s some truth-telling artistry there that could be refined into something timeless. Tank and Jaheim don’t lack in the voice department and both have more enduring material in their catalogs that makes the laziness and “shock for shock sake” appear desperate, kind of like that “educational” Brian McKnight moment I’ve registered for electroshock to forget.

In classic songwriting, particularly songs written for the stage, the trick was to get artists to have their characters convey “I love you” to their partner without ever actually saying those three words. That trick was one of limitations and boundaries, one that, as usual in art, exploded a world of wit and creativity out of necessity, songs that have endured generations. That trick is the whole of Tin Pan Alley, the Great White Way, and the Stax, Motown, and Philadelphia International Records catalog—really 90% of R&B, soul, country and pop music until the last decade or so. The same could be said for sex and intimacy in song until roughly about the time D’Angelo went from cleverly asking for some “Brown Sugar” to more directly stating how much he loved to “beep!” inside his woman in 2000’s “Untitled (How Does It Feel).” Prior to this and well, R. Kelly, it was generally accepted that little could be more intimate than Teddy Pendergrass directing you to “Turn Off The Lights” or Donna Summers cooing “Ahaaw, love to love you, baby.” There’s no cleverness in bodily secretions and no artistry in identifying its science. Some human habits are just cold, hard facts absent any romance in the harsh light of day. Sans the consciousness awakening potential of socio-political commentary, we don’t need artists to deliver the cold harsh lights of science and the brutality of humanity; life delivers us enough of that in spades. Art is expected to be life heightened.

While artists have the right to create whatever they want and as I’m something of a civil libertarian, this is not a call for censorship. However, it is a call for artists to do better, to challenge themselves more, at least as much as their foremothers and forefathers did in their songcraft. It is a request that they aspire to create something more artful than the boasts any street corner layabout could muster without breaking a sweat. Some will argue that every generation pushes the envelope and boundaries of what’s acceptable in music and art. Seeing as how the envelope has long since fallen off the table and is now floating alongside some questionable matter in a Jersey sewer, I can only imagine that by the time my two-year-old niece comes of age there will be odes to the cervix and the only verbs and adjectives stated more than “and” will be those spelled in four letters—and that’s just on NPR. We can do better. And, while we’re at it, stop all the damn cursing! Sh*t!