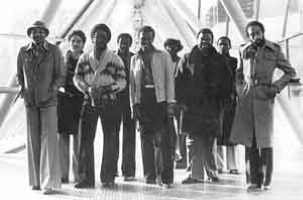 During the half dozen years beginning in 1975, there weren’t many groups that provided the fun and funk like Portland, Oregon band Pleasure. Originally formed in the early 70s as a merger of two local bands, The Franchie and The Soul Masters, Pleasure delivered a number of hits that epitomized the joy and pure musicianship of many of the great R&B and funk acts of the era.

Helped by sax legend Grover Washington, Pleasure signed with Fantasy Records and producer Wayne Henderson. It began a great collaboration the led to a series of memorable albums and number of major hits, including “Joyous,” “Yearnin Burning,” and the group’s signature hit, “Glide.”

The band broke up in the early 80s, though many of its members stayed active working with dozens of other artists. Over the years, various formations of the group re-emerged. Most recently, a new version of the group consisting of Hepburn, Nathaniel Phillips, Douglas Lewis, Dennis Springer, Brian Foxworth, and Tiffany Wilson, is performing quite nicely, and indepdendently issued the 2019 release Now Is The Time.