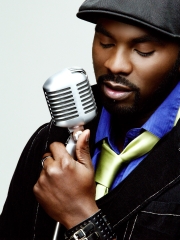 Out of the soul of Mississippi comes a young talented musician, songwriter, and producer. Prince "BlkMagic" Damons is one of the hottest new producers in R&B, Soul, and Hip Hop. Though the "Dirty South" claims Damons as one of the area's top producers, his hot tracks are being heard all over the world. He is the musical force reconstructing the soul of today's music. Damons has produced hits for some of today's hottest artists as well as seasoned veterans like Atlantic Records legendary recording artist "Mr. Tighten Up" Archie Bell . You can even hear Damons' bangin' tracks in the background of several CW Network TV shows and movies including "90210," "Tyra Banks Show" and "TMZ."

Born in a small town in Northeast Mississippi , Damons started playing his first instrument around the age of four. His profile now includes 13 different instruments including piano, drums, bass and guitar. After earning his bachelor's degree in commercial music at the University of North Alabama , he relocated to California and landed a deal as a freelance music producer and ghost writer, allowing him to work with several major record labels around the country.

Damons is currently finishing his highly anticipated solo project, Atmospheric Soul (Fall 009), and has teamed up with old friends and multiâ€Platinum selling artists such as Lenny Williams (Tower of Power), Dwele, E40, Too Short, Goapele, "American Idol" (Season 3) finalist LaToya London and the legendary Archie Bell, amongst many others. Buzz around this album rumors Damons to be the "Quincy Jones" of a new era. Atmospheric Soul takes Soul to the next level embracing and compressing the sounds of R&B, Hipâ€Hop, Jazz, Spoken Word and a hint of Country influence.

In recent news Damons just finished working in the studio with Tapa Records' pop/rock singing sensation Nicci Nix (http://www.niccinix.com/), whose new EP NixMix debuted March 2009. Even more recently, Damons is producing new albums for both Bell and London . And his video for "Can I Take Ya Picture" can be seen on BET, VH1 and MTV.