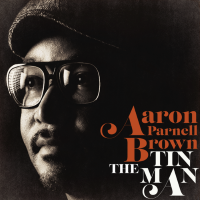 Click on CD cover
to listen or purchase
https://www.amazon.com/Tin-Man-Aaron-Parnell-Brown/dp/B010E5KCVM/ref=as_sl_pc_tf_til?tag=soultracks-20&linkCode=w00&linkId=M67Z6BQMOUZ3ATDR&creativeASIN=B010E5KCVM

It's been a few years since Aaron Parnell Brown quietly first achieved local attention around his native Philadelphia performing under the moniker Aaron & the Spell. Then in 2012, his blend of soulful rock reached the ears of the folks at NPR Music, who named him "One of 10 Artists You Should Know."

It's been a few years since Aaron Parnell Brown quietly first achieved local attention around his native Philadelphia performing under the moniker Aaron & the Spell. Then in 2012, his blend of soulful rock reached the ears of the folks at NPR Music, who named him "One of 10 Artists You Should Know."

Unfortunately, people outside of the Northeast US still don't know him or his music. Well, that may now change as Brown more confidently moves to the forefront under his own name and a better defined sound on his sophomore album, The Tin Man. "Confidently" is maybe the most appropriate term for the metamorphosis of this singer and songwriter. He's always had that voice - a baritone that resembles a more emotive, slightly more fragile John Legend.  But with The Tin Man, named after the Wizard of Oz character who found the heart he always had, Brown displays a more mature, true vision and he creates an album of surprising thematic coherence. It is an unabashed nighttime project that explores the nuances of love, providing sophistication in both the album's lyrical statement and in the musical production that surrounds it.

The Tin Man opens with "Bleed Me Dry," a secular song with a sound right out of a Memphis church. Brown kills it vocally, testifying over the choir and trading licks with saxophonist Andy Snitzer. It is an auspicious beginning, and perhaps the most unrestrained performance on the album. It also gives a sense of Brown as a lyricist. His protagonists are emotional but also thoughtful, feeling deeply but recognizing that love is full of grays rather than blacks and whites. The album's first single, "Just Leave," continues that sensibility, as a man who has been unfaithful wants to do right again, but the complications of his tryst won't go away cleanly. The song has an intentional 70s vibe - the kind that could place it nicely on a Norman Connors album of the time.  Just as good is the midtempo "Leave The Light On," where a man who misses the love he once had can't move on, instead waiting in the unlikely hope of its return: "Much time has passed for us / so much has changed between us / but I still think of you all the time / I know you're gone but I'll leave the light on."

While Brown is the principal songwriter on The Tin Man, he covers two songs, and each of them is a revelation. The Black Keys' electric "Everlasting Life" is unrecognizably beautiful stripped down to a simple piano ballad, with Brown putting heartfelt emotion back into the inspirational, lovely lyrics in a way not remotedly hinted at in the original.  And he goes the other way with Elton John's long lost Captain Fantastic ballad, "We All Fall In Love Sometime," taking it in a more muscular, bluesy direction, and letting his band add a deep groove that gives the song surprising power.

Brown is still growing as a songwriter, and a few of the songs ("I Believe In You," "Somewhere Around") are a bit underdeveloped. But the musical instincts of Brown and producer Matt Pierson are right on throughout The Tin Man. In a time of generally overproduced, often underperformed albums, The Tin Man has a completely live, organic feel. The liberal use of organ along with guitars, sax, keys and drums allows the disc to smoothly move between R&B and jazz, relying on the musicians - rather than wizardry - to make the transitions. And the band is uniformly on point, giving the whole affair a wonderful intimacy -- a word rarely used to describe R&B music in 2015. But the best instrument of all is Brown's voice, expressive and engaging, seemingly ready to break at the most melancholy moments but fully captivating at all times.

From its consciously retro cover to its intentional avoidance of electronics and synthesized instruments, The Tin Man is in some ways a blast from the past. But it is neither tired nor nostalgic. Instead, The Tin Man has a timeless feel of an album that could have been released in 1975 but sounds fresh and even unique today. A great band and artist with visions of creating a classic have together presented an album that comes awfully close to being just that.  Maybe Aaron Parnell Brown was born 40 years too late, but the modern musical world could use more thoughtful, organic, nuanced albums like The Tin Man. He is a talent, and I can't wait to see where he goes from here. Highly Recommended.