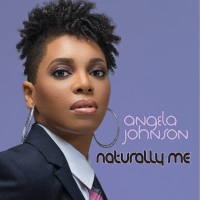 Click on CD cover
to listen or purchase
https://www.amazon.com/Naturally-Me-Angela-Johnson/dp/B00LC4GQH4/ref=as_sl_pc_tf_til?tag=soultracks-20&linkCode=w00&linkId=WCI73FMESHLOYNBN&creativeASIN=B00LC4GQH4

"Wow!" — that's the first word that comes to mind after experiencing Angela Johnson's new album, Naturally Me. In fact, "wow" could even describe the sensation upon hearing the album's very first song, "To Love Again." When an artist has written, recorded, and produced a career-defining masterwork, as Angela Johnson clearly has, the "wow" moments appear early and stay for the album's duration.

"Wow!" — that's the first word that comes to mind after experiencing Angela Johnson's new album, Naturally Me. In fact, "wow" could even describe the sensation upon hearing the album's very first song, "To Love Again." When an artist has written, recorded, and produced a career-defining masterwork, as Angela Johnson clearly has, the "wow" moments appear early and stay for the album's duration.

Naturally Me arrives via Purpose Records, a label whose profile has grown parallel to the evolution of Johnson's career. Since its inception just over ten years ago, Purpose has carved a niche in the marketplace as an oasis for independent musicians who contribute to the current landscape of music while maintaining their individuality. Quality production, inspired songwriting, and high-caliber musicianship are the guiding principles of Purpose. No artist on the roster embodies those principles more fully than Angela Johnson, who's released a stream of consistently excellent recordings on the label, first as one-half of Cooly’s Hot Box and then as a solo artist. More than a decade into her tenure on Purpose, Johnson has maintained a level of distinction unsurpassed by many of her peers.

Johnson has always explored new dimensions of her artistry with each release, whether writing and producing for Rahsaan Patterson and Maysa on A Woman's Touch, Vol. 1 (2008) or revisiting her catalog in remixed form on Revised, Edited, & Flipped (2012). The time between each of her full-length studio projects They Don't Know (2002), Got to Let It Go (2005), and It's Personal (2010) prompted inevitable growth but not even those albums could have prepared listeners for Naturally Me. The news is this: Angela has flicked the switch on her "it" factor. Her singing, songwriting, producing, arranging, and playing talents beam like a Times Square billboard.

Never has a sense of anticipation opened Johnson's albums the way it does on "To Love Again." Sparse yet commanding, the instrumentation calls to mind the chilling ambience of "Remember (Walking in the Sand)" by the Shangri-Las. Johnson maximizes the drama before singing the first lines: "They tell me there’s no cure / They’ve done all they could / My heart’s broken into pieces / And it’s not healing like it should." What emerges is a triumphant declaration of the hope that, despite the heartache, her heart will mend and love will return. (It must be said that both here and elsewhere on the album, the vocal blend of Lisala Beatty, Tiffany T’zelle Wilson, and Darius Booker complements Johnson's voice to stunning effect.)

Whereas "To Love Again" represents a successful departure from the style of Johnson's previous output, "I Promise (M.O.NE.Y.)" is quintessential Angela — a soulful groove that ebbs and flows, and exhibits how effortlessly she fuses elements of R&B, pop, and jazz into a sumptuous four-minute adventure in paradise. Joining Johnson on vocals is Raul Midón, who also lends guitar to the track. Their winning vocal interplay is one of the album's many highlights and will hopefully yield future collaborations between the two.

A couple of distinct moods anchor the superb, musically mischievous "Handz." The verses boast a beguiling melody that winds like a path in a field of flowers.  "I like the way he flashes me a smile every time our eyes meet," Johnson sings. However, her coquettish tone suddenly takes a turn in the chorus and "Handz" erupts into a jazz-funk inferno of searing desire and passion. "I'm begging on my hands and knees / Won't you give me a little something," she exclaims. Johnson goes another round straddling the tension between the verse and chorus before the song steams forward in a rousing vamp. She also displays her dexterity on the organ amidst fine work from Les Cleveland on drums, Wes Mingus on guitar, Trevor Allen on bass, and Ernesto Abreu on percussion.

The depth and power of Johnson's talent as a lyricist shines on "Black Boy Lullaby." In just a few words, she encapsulates the insidious dynamics that place young men of color under suspicion and take their lives, not only evidenced by the tragic death of Trayvon Martin but all of the deaths that go unreported outside the national spotlight and newspaper headlines. "Despite the good you’ll do, they’ll be someone with a different point of view," she warns. Johnson balances the stark reality with a hopeful sentiment. "If we choose to live our lives in fear we won’t survive," she says, as the song progresses towards an evocation of love's prevailing spirit. One of the more gripping sequences on the album includes Johnson, Beatty, Wilson, and Booker chanting "love" in harmony as their voices rise through the music and bring the song to a near a cappella conclusion.

If Naturally Me had a vinyl release, Johnson's cover of "Déja Vú (I've Been Here Before)" would make a stunning conclusion to Side One. Originally penned and produced by Rick James for Teena Marie's Wild and Peaceful (1979) album, the song becomes a touching tribute from Johnson to two luminaries who departed the world far too soon. Onaje Allan Gumbs guests on grand piano, with Johnson flexing every muscle of her vocal chops. Johnson's string arrangement is the perfect ingredient to keep the song floating like a cloud through a clear-blue sky.

Paying close attention to Angela Johnson's career, there's one particular artist who occasionally surfaces in her musical journey— Reverend Al Green. Whether recalling one of his appearances on Soul Train ("If I were older, I would have married that man," she once quipped), echoing his work with Willie Mitchell on "I'll Always" (from Got to Let It Go), or opening for the legend himself, Johnson holds a special place for the artist among the many individuals who've influenced her. Johnson channels that love into "I Don't Mind," a track whose soulful strut could have easily powered any number of Hi Records releases in the 1970s.

"He Saw Love In Me" immediately seizes attention with Johnson's deft maneuvering of the drums and piano. Fueled with a sneaky little bass line by Trevor Allen, the track's a joyous celebration of how any relationship worth pursuing — and keeping — takes time to blossom. The wisdom's in the bridge: "He's gonna come around just in time / You got to let him make up his mind / Once he sees you living life so carefree / Loving yourself, don't need him to make you happy / When he makes his move you'll know what to do." The lyrics are enveloped by such a tuneful arrangement, it's hard to resist Johnson's invitation to "clap your hands."

The clapping accelerates on the contagious, completely instrumental "Music's My Religion." Here, it's the instruments that "sing," from the first few beautiful notes of Monét's flute to incendiary guitar work by Wes Mingus, who receives a special credit for his featured solos. Johnson and her musicians completely let loose, delivering a live concert to the listener's living room (or iPad). If music is Johnson's religion then she'll doubtless make believers out of anyone within earshot of this track.

Leading a gumbo of sounds, Johnson invites Darius Booker to join her on lead vocals for "Say Yeah." The two vocalists create a musical rapport that's different but no less appealing than Johnson's duet with Raul Midón. Johnson's plea to rally together against such pervasive concerns as violence, the prison-industrial complex, prohibitively expensive education, and genetically modified food is rendered with a heartfelt yet grounded delivery. "I never was the type to stand on a soap box and speak from my mind / I can't be silent and expect to see a change," she sings. This is no mawkish attempt to change the world but a clear-eyed endeavor for everyone to "do more and complain less."

Johnson closes Naturally Me with the flip side of the atrocities outlined in "Say Yeah." In fact, the person Johnson introduced on "To Love Again" could very well be the same individual on "A Beautiful Place," with lines like "I ain't got no time for troubles, I'm preserving my sanity." The song is suffused with Johnson's own kind of sonic sunshine — an infectious groove, bright horn accents, and vocal accompaniment by the formidable Lisala Beatty.

It's an interesting symbiotic relationship that Johnson shares with her listeners. "Give me love and a beautiful vibration," she sings on "A Beautiful Place." However, by the end of Naturally Me, it's the artist herself who's given listeners that same beautiful vibration. Indeed, Angela Johnson's latest project is the gateway to a blissful, unforgettable musical ride.