Ashford and Simpson - Love Will Fix It: The Warner Bros. Records Anthology 1973-1981 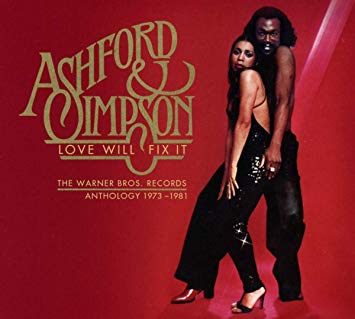 If history books printed by millennials get it right when referencing some of the greatest duos of the 20th century, particularly songwriting pairs, Ashford & Simpson should make the mark. After grueling as a collective songwriting team for Ray Charles, shipping out singles for Glover Records (as Valerie & Nick) and showing off their mighty prowess at Berry Gordy’s Detroit hit making factory of Motown (“You’re All I Need to Get By,” “Ain’t No Mountain High Enough,” “Your Precious Love,” “Ain’t Nothing Like the Real Thing”), Nickolas Ashford and Valerie Simpson stepped out on their own and solidly found their voice as artists. And it was at their third music home of Warner Brothers where they flourished in two acts: smoldering soul act and euphoric disco architects.

If history books printed by millennials get it right when referencing some of the greatest duos of the 20th century, particularly songwriting pairs, Ashford & Simpson should make the mark. After grueling as a collective songwriting team for Ray Charles, shipping out singles for Glover Records (as Valerie & Nick) and showing off their mighty prowess at Berry Gordy’s Detroit hit making factory of Motown (“You’re All I Need to Get By,” “Ain’t No Mountain High Enough,” “Your Precious Love,” “Ain’t Nothing Like the Real Thing”), Nickolas Ashford and Valerie Simpson stepped out on their own and solidly found their voice as artists. And it was at their third music home of Warner Brothers where they flourished in two acts: smoldering soul act and euphoric disco architects.

During the pair’s duration there, their craftsmanship showed up gloriously on R&B stars such as Diana Ross, Chaka Khan and Gladys Knight & the Pips. By the time the ‘80’s emerged, they forged ahead with a unique sound in the evolving contemporary age of R&B at Capitol Records, climaxing with their Top 20 pop hit “Solid.” But it was Ashford & Simpson’s tenure at the Warners from 1973 to 1981 that remains the most sought after. US compilations are rife on this period, yet they are mostly incomplete, only giving us the bare minimum of what a “greatest hits” collection should look like. At last, UK’s Groove Line revisits Ashford & Simpson’s storied nine-album catalog at Warner Brothers with a fuller update of their 2016 Record Store Day-available, vinyl-only Love Will Fix It compilation, a double LP compilation feature focusing only on single versions by cramming nineteen tracks unto four sides. But this version, a mammoth three-disc collection, travels up and down “by way of love’s express” and hands true archivists of Ashford & Simpson stock nothing short of a five-star train ride through their finest material.

The first two discs — all fully packed with a juggernaut selection nearing twenty tracks a piece — go back and forth from single and album versions of every A&S’s charted single. No exclusions aboard; which gives this compilation a mightier advantage over its predecessors. The first disc may be the greatest gem in the rough as it shines a light on their highly overlooked early years at Warner Bros, way before the disco boom. And it’s on these golden moments where you hear the magic of their sophisticated post-Motown songwriting.

Getting their cues from their groundbreaking work heard on Marvin Gaye & Tammi Terrell, the pair focuses on elongated exercises of Aretha soul.  “Anywhere” is the perfect album opener, exposing an arrangement richly blessed with vibes, magical strings, and emotive harmonies. It is equally matched with “Gimme Something Real,” also taken from their debut LP for Warner Bros. Structurally reminiscent of Aretha’s take on “Oh My Oh My,” this song opens calmly, set to Val’s poignant and soulful piano, while wrapping around personal testimonies about “having enough thrills” and, for a lack of better words, wanting the real thing.By the time the vamp comes in, the song kicks into overdrive, soaring into Sunday morning revival territory and encapsulated with punchy gospel choir harmonies. It’s a shame the song didn’t get released as a single, but the programmers of this collection gives it to us anyway.

Warm revisits of their early albums I Wanna Be Selfish, Come As You Are and So, So Satisfied are offered, including the gospel-powered “Main Line” and the string-laden pop-soul of “Everybody’s Got to Give It Up.” Towards the backend of the first disc, Ashford & Simpson’s sound evolves for the better. They hammer down luxurious dance floor gems like “Tried, Tested and Found True” and “Don’t Cost You Nothing” before capping off with “By Way of Love’s Express” and their instrumental flight of “Bourgie Bourgie.”

Disc 2 focuses heavily on Ashford & Simpson’s golden era with succulent offerings taken from their best-selling LPs from the Warner Bros deck (Send It, Is It Still Good to Ya?, Stay Free and Musical Affair), three of which were certified gold. It acts as the sturdier of the discs, swinging from album versions of “It Seems to Hang On,” “Found a Cure,” “Nobody Knows” and the seductive power ballad “Is It Still Good to Ya?” Gems like the vivaciously funky “Get Up and Do Something” and “I Ain’t Asking for Your Love (a hit for Phyllis Hyman) are also embedded into the stack, giving the collection a more balanced overview of this productive period. The closing track, the icing on top of the musical cake, is a live medley of their memorable Motown compositions cherry-picked from their Performance (1981) album.

All of Jimmy Simpson’s original 12” mixes from Ashford & Simpson’s majestic disco output are completely gathered up and exhibited on the third and climatic set – one that plays with only remixes and expanded versions. From the ever-funky “Don’t Cost You Nothing” to the ethereal presentation of “It Seems to Hang On,” they all are preserved here for posterity. Even Tom Moulton’s 2008 ten-minute lordly mix of “Found a Cure” and a slightly-expanded “Over and Over” – a song that Sylvester mastered in 1977 – rises to the surface. Also aboard, newly crafted mixes of songs that failed to get the proper 12-inch treatment the first time around are all supplied with Studio 54 grandeur. And all are so, so satisfying: John Morales gives us an eight-minute M+M take of “Love Don’t Always Make It Right,” ripe with instrumental breaks and plenteous chorus repeats, while a percussion-heavy mix of “Bourgie Bourgie” stretches the furthest as it reaches the eleven-minute mark. But it’s the sweeping Groove Line remix of “Stay Free,” one of Ashford & Simpson’s underrated and grossly ignored disco tracks, that reigns as the disc’s golden moment. Here Mike Maurro and Wayne Dickson stretch the sweet string sections and instrumental sections with refinement using Tom Moulton-esque magic.

Now the market has been kind with dropping reissues and greatest hits compilations of Ashford & Simpson’s work. But chronicling all of their hits in a mighty multi-pack in the style of Groove Line’s update of Love Will Fix It, even in the US, is pretty rare. 2008’s The Warner Bros. Years: Hits, Remixes & Rarities is as close to a definite collection as we’ve ever gotten. But with the abundant omissions of their finest ballads, that set was mostly a stocking stuffer for disco lovers. This collection goes beyond the call of duty. Although it doesn’t flow in exact chronological order of when they were actually released, compiler Wayne Dickson comes mighty close. And it is in his careful hands that we hear a luscious non-interrupted flow that compliments the tapestry of an easy-listening album experience, building stronger with each and every following track. The package is also sweetened with Christian John Wikane’s liner notes, written celebrity tributes and a handsome display of archived group photos and single scans. There’s hardly a hit missing from this period inside this collection, except maybe “Stuff Like That” from their collaboration with Quincy Jones. And so, if you’re hunting for the more superior and soul satisfying collection out there, at least until a more comprehensive one comes along merging their Capitol run and early material, this will do you real good. It honestly doesn’t get any better than this. Highly recommended.