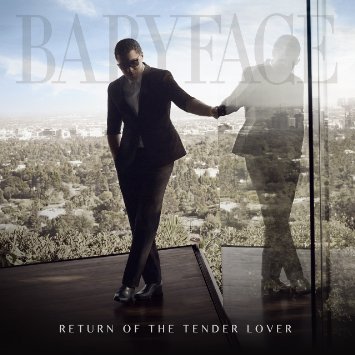 Click on CD cover
to listen or purchase
http://www.amazon.com/gp/product/B016ACTK9I/ref=as_li_qf_sp_asin_il_tl?ie=UTF8&camp=1789&creative=9325&creativeASIN=B016ACTK9I&linkCode=as2&tag=soultracks-20&linkId=54B2RQ53BY3P6LII

Babyface - Return of the Tender Lover

Babyface - Return of the Tender Lover

For those of a certain age, there was a surefire 'starter kit' to get the romantic engines racing to the finish line (or at least beyond second base): wine, roses, candlelight and repeated spins of Tender Lover. Kenneth "Babyface" Edmonds wasn't the only soul man singing love songs, of course, but in 1989, the vocalist, producer and songwriter all but trademarked a combination of sweet yet sensual that branded him as a leading 'go-to-and-get-the-job-done' R&B Love Man. From the urgency of "It's No Crime" to the tearjerker "Where Will You Go," Babyface's songs were equal levels of veracity and vulnerability that spoke on men's wants, women's needs and the promised land of Happily Ever After. It's been more than 20 years (!) since Tender Lover and a decade since he's released a CD of new material, but please believe that time has aged only his perspective as Babyface gets back into the spotlight with his 10th studio CD, Return of the Tender Lover.

It probably would've been simple for the superstar musician to attempt a revamp of Tender's inescapable hits, or to jam-pack each track with a rap cameo and duet with one of today's hot names, but Babyface is too wise to cheapen his own legacy in such a fashion. Instead, he revisits his familiar stomping grounds of love and relationships but with more perspective than platitudes (likely due to his newlywed and renewed father status after the end of his 13-year union to Tracey Edmonds). What you hear in the nine tracks is a man who may be drawn by a pretty face and a fine shape, but wise enough to know that it's her heart and soul with which he must live and be contented day in and day out.

Babyface sings passionately about the struggles of everyday relationships from beginning to end, accompanied by other seasoned pros (Greg Phillinganes, Darryl Simmons, Nathan East and Kameron Glasper) who could care less about trendy and aim for timeless with solid results -- 'Face's soothing falsetto adds poignancy to the uptempo ode to perserverence, "Fight For Love," reunites with After 7 on the breathless "I Want You" and even dials it back to an early Motown feel with another former collaborator, El DeBarge, in the giddy rollicking fingersnap of a groove, "Walking On Air": "One in a zillion, my shining star/you know I'm ready and willing, to go whereever you are." Even when the clouds of reality threaten the sunshine of their togetherness, "We've Got Love" is an upbeat declaration that shores up uncertainty with the promise of brighter days.

Return... doesn't exactly brim with ballads, but the ones here will likely satisfy: "Love and Devotion," which may remind many of Boyz II Men's "I'll Make Love To You," is the closest Babyface comes to a sheet-scorcher, and "Standing Ovation" is an unabashed love letter to the ladies for remaining queens despite being put-upon by "carrying all the weight" of "all the the things we [men] put you through." 2016 may also find "Our Love" as part of main wedding dances, a lilting endorsement of a life together that's far from a crystal stair, but still the only one that matters enough to remain a part of: "Our love is not a perfect love/ even though it gets hard, it's the only kind I want," he croons with a solemn sweetness. "Our love is a resilient love/when it comes to our hearts, our love it can't be undone."

Return..., in comparison to the 1989 classic it harkens to, isn't as heavy on the butterflies-in-stomach or dopamine-fueled highs, but the romance still remains and the wisdom of aspiring beyond the fairytale is what today's couples will likely relate to and resonate with more, especially when such truths are delivered by a man and musician who's obviously practiced what he's preached. If infatuation lasts like soda and love ages like wine, consider this Lover a crisply-chilled goblet of the latter and enjoy. The effects won't be immediate, but the satisfaction is likelier to last. Highly Recommended.