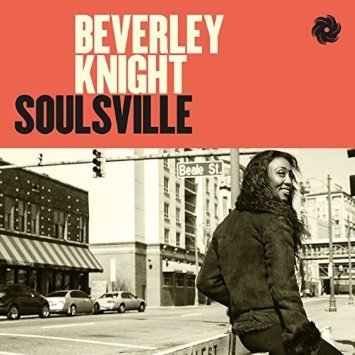 Ahh, Beverley Knight, the vocal powerhouse who has been the female voice of soul music in UK for over two decades. The beautiful soul from Wolverhampton has an instantly recognisable voice has that produced hit singles and big selling albums, and led her to work with some of world’s greatest musicians. Raised singing gospel in church, Beverley burst onto the scene with her award winning album The B-Funk in 1995, at the right time when R&B was a dominant force in music, and the first single “Flavour of the Old School”had everyone dancing in the clubs, parties and in our cars.  Knight’s 1998 sophomore album, Prodigal Sista, included a collaboration with rapper Redman on the lead single Made It Back, and other charting singles like “Rewind (Find A Way)”, “Sista”, and “Greatest Day”, bringing her more media attention and more music awards.  So brightly was her star beginning to shine that her record company swiftly repackaged and re-released the album with additional songs and remixes (and you thought Beyoncé pulled that trick first-ha!), and it went on to even more commercial success.

It was with the third album, Who I Am,released in 2002, that really saw her become an appreciated mainstream R&B artist.  She delivered heartfelt songs like “Should Woulda Coulda,” dancefloor fillers like “Get Up,” and even a remix from Fugees rapper and producer Wyclef Jean on “Shape of You (Reshaped).”  Like previous albums, it was critically acclaimed, and more recognition and award nominations swiftly followed.  However, what came next was a surprise to some of her fans, yet showed Knight’s savvy reading of the musical market.  Rather remain in the R&B category, she widened her gaze and released Affirmationin 2004, which although still rich with personal soulful lyrics and vocals, also had elements of rock and pop to help reach a more commercial market.  Though another critically acclaimed album, it was not as well received by some black fans, but their loss was the gain of a new legion of fans that got turned onto her powerful sound on tracks like “Remember Me,” “Come As You Are,” and “Keep This Fire Burning”.

Having kicked the media wide door open, Knight opened for major acts like Prince on arena tours, allowing her to reach a wider fan base. Since then she has not looked back, and she has rightfully held on to the crown of Queen on UK Soul.  Whether producing stunning covers of classics by Erma Franklin, Aretha Franklin or Al Green on the album Music City Soul, a musical love letter to Nashville, or paying homage to UK soul acts like Soul II Soul, Loose Ends, and Lewis Taylor on her last album, Soul UK, Knight has not disappointed.  While many of her 90s peers have slowed down or disappeared, or turned to drastic media stunts to stay relevant, Knight’s career continues to gather momentum.  She has performed to a global audience at the London 2012 Paralympics opening ceremony, received an MBE from the Queen (and been invited to sing at her 90th birthday party), and shared the stage with legends like Quincy Jones, Lionel Richie, and the late Prince.  She also took to the stage in her first acting role, taking over from Heather Headley in the UK production of The Bodyguard to rave reviews.  From there Knight moved onto another smash hit musical show Memphis, which was nominated for theatre awards, and there are now rumours of forays onto television too.

Which brings us very nicely to June 2016 and the release of her eighth studio album, Soulsville; her first release with East West records.  Recorded entirely in one week in the legendary Royal Studios, which still has Al Green’s original microphone and fully functioning Hammond B3 organ, Knight delivers another giant slice of soul on this album.  Not being a stranger to the music game, Knight has used some of the finest writers, producers and musicians on this album, giving it an authentic and traditional feel, while at the same bringing a fresh energy to both new material and some well-loved soul classics.  Inspired by an earlier trip made by Knight to Memphis, the album is made up of 5 covers and 7 original songs, and in all of them she brings a real earthiness and blues influence alongside the soul.  On “Hound Dog,” which features the musicianship of Jools Holland, Knight doesn’t cover it like the Elvis, which is quite ironic given his Memphis connections.  Instead she takes it back to the original version by Big Momma Thornton, channelling something more gut wrenching as Knight sings of the disappointment of the one who promised much but was actually just a dog.  On “Hold On I’m Coming,” Knight duets with Sam Moore, one half of the Sam and Dave duo that recorded the original.  Moore’s voice hasn’t aged, and is more than a match for Knight, as they holler at us to “hold on!” over a tight band of horns, guitar and drums.

Perhaps the standout track is Knight’s original composition “Red Flag”(co-written with Guy Chambers and Mark Ronson),which lists all the warning signs missed by ladies in relationships.  On this spirited, tuneful track, Knight soars heavenly at the chorus over the tight beat, hand claps, and backing vocals.  Other gems include the lead single “Middle Of Love”(co-written with Jimmy Hogarth), which finds Knight asking her lover to step away from all the frustrations and go back to the start of their romance, when things were more even footed, i.e. the middle of love.  If you can catch the acoustic version of this track, you’ll be even more moved by the lyrics and vocal arrangement.   “I Won’t Be Looking Back” (co-written with Paul Barry) sounds like it was recorded in in the 60’s alongside the other legends of the time, something Otis Reading or Etta James would have rushed into the vocal booth to record.

Knight does try her best on the covers, although the bluesy arrangements on “Don’t Play That Song For Me” and “I Can’t Stand The Rain” don’t quite hit the right note, and take the album to its lowest point.

Though the disc has the feel of a “covers” album, the real highlights of Soulsville are Knight’s original compositions, which are both in sync and of a quality comparable with the classic originals.  The disc is clearly an homage to an era of music Knight loves, and the combination of new and old works quite well. Classic soul and blues fans will enjoy this album, as will Knight’s legion of loyal soul music fans. And once again, Beverley Knight shows she is a versatile artist with unusual staying power and a sense of musical history that is equal to her enviable skills as a songwriter and singer. Recommended.