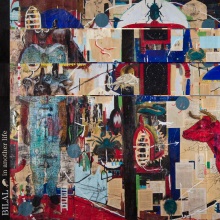 Click on CD cover
to listen or purchase
https://www.amazon.com/In-Another-Life-Bilal/dp/B00XDUW18S/ref=as_sl_pc_tf_til?tag=soultracks-20&linkCode=w00&linkId=N2OFHPVU4E2VGH2H&creativeASIN=B00XDUW18S
…

Underwhelmed is the furthest thing one anticipates to feel when listening to a Bilal Oliver project. Yet, considerable swaths of the new Adrian Younge-produced Bilal project, In Another Life, falls into this category. Low-fi production choices designed to give the project an aged minimalist sound that characterized the solo debuts of Aloe Blacc and Cody ChestnuTT are partially to blame, as is the near whisper spare instrumentation that undercuts some of the half ‘n’ half project’s lesser tracks. The songs that work are those where the melody is strong enough to withstand the stripped approach to this late ‘60s, early 70’s underground rock and soul sound. Lyrically, Bilal always has something to say and the timely socio-political messaging here is no exception; the challenge is whether long time fans will want to hang around long enough to receive what the left-of-center artist has to say.

Bilal has always flirted, blended, and played with the boundaries of different musical genres with wildly varying results, with a litter of classics and near misses from his First Born Second 14 years ago to 2013’s A Love Surreal. His extraordinary funk infused vocal instrument and strong melodic sense of jazz, rock, and soul generally centered the soul of the material enough to allow adventurous forays into avant-garde musical art. Depending on your tastes, on In Another Life the center is too weak and often comes undone, despite a handful of very fine tracks, partially thanks to guests like Kimbra and Kendrick Lamar. Yet, the overall project, while clearly complete, manages to feel like an unfinished demo.

The songs that work are solid and depend on Bilal’s usually reliable musicality. The ironically lilting “I Really Don’t Care” feels like a period nightclub performance at the Copa for a classic soul star. Its sultry atmosphere may be the closest to what Bilal’s more urban adult contemporary fans are looking for. A compellingly arranged “Holding It Back,” featuring a sweet-voiced Kimba and co-written with Saudia Mills, nicely blends hip hop percussion with a light prog rock sensibility. Flipping the script from the usual romantic notion, “Money Over Love (feat. Kendrick Lamar) has the Blaxploitation film soundscapes on which producer Adrian Younge cut his teeth, making his name as one of the most sought after alternative and retro soul producers. The juxtaposition of the ‘70s doo-wop shouts against Lamar’s platinum-spitting bars is a song highlight. While it has a meandering feel to it, the Loren Oden co-written “Bury Me Next To You” largely wins through its melancholic storytelling and a rare taste of Bilal’s natural on the verse for most of this vulnerable journey. The pop confection retro soul of “Love Child” delightfully surprises through its marriage to a near reggae vocal on a cut that somehow manages to feel like a classic rock song. These are some of the sweeter sides of Oliver’s experimentations.

Much of the rest is far less successful, roughly half of the album, venturing between the forgettable and uninviting to the self-indulgent. Songs like the vaguely Sondheim tinged “Spiraling” and the funky “Sirens II” have musical elements that inspire interest, but feel like incomplete thoughts and tend to frustrate more than embrace. The bright cha cha of the metaphorical “Open Up The Door” definitely makes me want to open up the door with its infectious hook and close harmonies, but just as I open the door, the compelling knocking—and song—is over. Meanwhile, “Star Now” doesn’t even inspire one to rise from the couch. Even the garage jam session single, “Satellites,” with its distant, poetic observations, fails to encourage more than shoulder shrugs. The less said about the pale Prince revivalist ‘80s new wave of “Pleasure Toy ft. Big Krit” the better. These songs don’t build, and generally fail to take you on much of journey. Surprises are few.

Suffice it to say, there is enough material on In Another Life that is still ear worthy and at least tries to do something new while respecting the past. It’s not the same ol’, same ol’, and its stories respect love, life, and humanity, which can be said for less and less popular music these days. In some ways this album is to be expected, as Bilal is a true artist. True artists always desire to explore, erase, and push the boundary lines of their chosen medium, taking risks, bending the universe to their creative will. Sometimes the universe bounces back, flicking that explorer into deep space, sending them floundering far from ground. On Bilal’s next Enterprise voyage, let’s hope there’s a bit more gravity under his feet and a smidge more oxygen for the rest of us to breathe, since his musical air can often be some of the sweetest around. Mildly recommended.