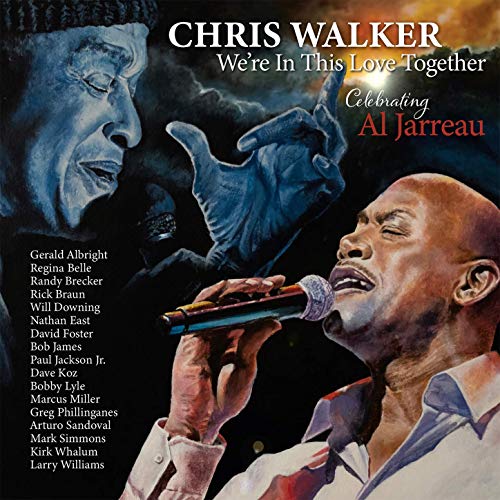 Click on CD cover
to listen or purchase
https://www.amazon.com/Were-This-Love-Together-Celebrating/dp/B07TJR6P9V/ref=as_sl_pc_tf_til?tag=soultracks-20&linkCode=w00&linkId=b81cef0f582458d02ab13051eddcabb7&creativeASIN=B07TJR6P9V

Chris Walker - We’re in This Love Together - Celebrating Al Jarreau

The endeavor of assembling a meaningful tribute album to a singular talent such as Al Jarreau is one of Herculean proportions. The late singer-songwriter is one of the most deserving artists of the last century to be commemorated and honored. His unmistakable, signature style was at once instantly engaging and beyond the confines of artistic expression revered within the universe of modern music.

Chris Walker - We’re in This Love Together - Celebrating Al Jarreau

The endeavor of assembling a meaningful tribute album to a singular talent such as Al Jarreau is one of Herculean proportions. The late singer-songwriter is one of the most deserving artists of the last century to be commemorated and honored. His unmistakable, signature style was at once instantly engaging and beyond the confines of artistic expression revered within the universe of modern music.

While Chris Walker’s name might not be the first to pop into many minds when considering likely candidates for such a tribute, it turns out that he’s exceptionally qualified to a degree that will wow a majority of listeners. The bassist honed his chops as a sideman for Ornette Coleman and musical director for Regina Belle prior to launching his own career as a vocalist in the early 1990s (“Take Time,” “Giving You All My Love,” “Love Tonight”). Over the next two decades, he worked closely with Jarreau as a bassist and backing singer, in addition to serving as his musical director. What has emerged from those experiences on We’re in This Love Together - Celebrating Al Jarreau is an arresting channeling of Jarreau’s methodologies and nuances.

In retrospect, certain tonal aspects and phrasing elements employed on Walker’s early solo albums bear a bit of the Jarreau influence; on We’re in This Love Together, it’s often easy to forget that it’s him—and not Jarreau—performing classics like “Roof Garden,” “After All,” and “Take Five.” There aren’t any moments of second guessing resulting from contrived attempts to simulate his mentor’s prowess. Rather, the innate ease of conveying vocal joy and complexity that Al so perpetually excelled at flows uninterrupted through Chris’s 17-track tribute.

We’re in This Love Together opens with a voicemail to Chris, left shortly by Al just days before his death in February of 2017. Its simplicity is a touching reminder of Jarreau’s good-hearted nature even in the face of failing health. Walker provides a keyboard pad beneath, which segues into a softly delivered interpretation of 1983’s “Mornin’,” beginning with the appropriately celestial bridge: “My heart will soar with love that’s rare and real…I know I can, like any man, reach out my hand and touch the face of God.” Jarreau’s co-writers David Foster and Jay Graydon, who both appeared on the original recording, play on the remake. On this and the subsequent “Breakin’ Away,” Walker makes an impact from the get-go by employing Jarreau’s timbre without resorting to a verbatim treatment.

The span of the collection is well balanced between the tunes that cemented Jarreau’s stature in the pop and R&B mainstream and the nuggets which centered on his jazz instincts. Some of the songs remarkably blurred those lines. 1980’s “Alonzo,” a Jarreau composition, is one such example, with almost oracular lyrics set to a stream of jazzy rhythms and melodies amidst a soulful atmosphere. Walker’s adaptation captures a similar cross-section of musical influences, tempering warm vocal harmonies with a flute solo by Larry Williams.

An unexpected moment on the set occurs via a unique interpretation of “Not Like This,” a Jeremy Lubbock-penned ballad from 1983’s Jarreau album. Bass clarinet, accordion, and flute complement Walker’s straight-ahead vocal treatment of the melancholy number, which defies any genre norms in the process. Another much-loved song from Jarreau covered is “I Will Be Here for You.” The players—including Rick Braun on flugelhorn and Kirk Whalum on sax—do a fine job of transferring the originally understated, synth-laden entry to an assertive arrangement driven by live instrumentation. Vocally, Walker holds his own in this context; but the emotional quotient is lost somewhat in the translation.

One of the most challenging of Jarreau’s classics that Walker takes on is “Spain,” a Chick Corea composition which Al adapted poetic lyrics to on his This Time album. The wide note range, changes in tempo and meter, and intricately phrased lyrics are all handled with precision and strength. Walker’s bass walking is top-notch also, as is the drumming gusto of Mark Simmons.

Two original tunes penned by Walker for the album bring the listening full circle in a relevant and celebratory context. On the shuffling and funky “Phenomenon,” Walker croons in the second verse: “And when Einstein saw the bending of the light, E = mc2, the theory of relativity/The pyramids, seven wonders of the ancient world—the eighth wonder, in fact, the acrobat of scat.” Light scatting in the chorus gives way to a building instrumental break and convivial closing vamp driven by Greg Phillinganes’ wizardry on keys. Meanwhile, the closing “Jarreau” is a jazz/bossa nova hybrid of few words and plenty of instrumental expression. Rick Braun’s trumpet solo and Dave Koz’s sax embellishments add vivacious strokes to Walker’s Rhodes, Larry Williams’ piano, and Nathan East’s bass foundation.

Several other revered artists join forces on We’re in This Love Together. Regina Belle reunites with Walker on the title track cover, perhaps the tune most universally associated with Jarreau. The arrangement attempts to neither make over nor replicate the original, with Walker and Williams as producers opting for a simpler approach. Gerald Albright provides sax fills, while Belle is in solid form and blends well with Walker in an amenable performance. It falls just a tad short of registering as memorably as most of the album’s other cuts. Additionally, Will Downing joins Walker for a faithful and enjoyable reading of 1975’s “We Got By.”

We’re in This Love Together is performed with admirable attention to detail and respect for the wondrous vocal craft and musicianship of Al Jarreau from open to close. Lifelong fans of Jarreau’s work will take comfort and joy in the expertly delivered homage, and casual listeners will have their ears opened to a priceless musical voyage in the most tasteful and truest way possible. Highly recommended.