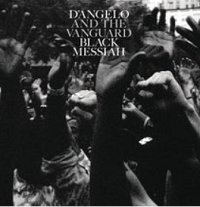 Click on CD cover
to listen or purchase
https://www.amazon.com/Black-Messiah-DAngelo-The-Vanguard/dp/B00QXL7MC4/ref=as_sl_pc_tf_til?tag=soultracks-20&linkCode=w00&linkId=66V4EYDMPBSLLJXQ&creativeASIN=B00QXL7MC4

(December 15, 2014) The year was 2000. The album was Voodoo by Richmond, VA native Michael Eugene Archer better known as two-album wunderkind D’Angelo. It was his second album that was in contention, following the more conservatively soulful, but nonetheless trend-setting multi-platinum debut, Brown Sugar (which celebrates its 20th anniversary next July). A twenty-five year old earnest me was in the backseat of my uncles’ car on a road trip to my mom’s house. There, I'm desperately trying to convince the two stalwarts that Voodoo, blaring from CD player, was the second coming of a musical Christ.

(December 15, 2014) The year was 2000. The album was Voodoo by Richmond, VA native Michael Eugene Archer better known as two-album wunderkind D’Angelo. It was his second album that was in contention, following the more conservatively soulful, but nonetheless trend-setting multi-platinum debut, Brown Sugar (which celebrates its 20th anniversary next July). A twenty-five year old earnest me was in the backseat of my uncles’ car on a road trip to my mom’s house. There, I'm desperately trying to convince the two stalwarts that Voodoo, blaring from CD player, was the second coming of a musical Christ. In response, the old school soulheads both turned and looked at me with an unconvinced shrug in their eyes and said, “The music is cool, but I don’t understand a word dude is saying.” Scoffing at these geriatric throwbacks who “just didn’t get it,” I argued the project’s merits in the most glittering terms: the intricate harmonies, the seductive melodies, the undeniable thump of the groove (Listen to that groove, man!), the musical marriage of funk, jazz, soul, and hip hop in ways no other artist D’Angelo’s age was then crafting. They listened, laughed, and said, “yeah, but what is he saying?” Fourteen years later, a similar argument will be being had as those who love what D’Angelo sacrifices to the groove and his stunning musicality exalt him and those who actually care about diction, lyric, and ease dismiss Black Messiah as muddied waters that one can bop their head to and little else.

Engineered by Russell Elevado, largely self-penned (with the help of co-writers Kendra Foster and Q-Tip), and completely produced by D’Angelo, a twelve-track Black Messiah dropped last night, inexplicably, with under a week’s notice of its pending arrival. It is the first studio album by D’Angelo in nearly 15 years, more than a decade after Voodoo sold double-platinum and artists as major as John Mayer named it one of the most influential albums of all times. After so many false starts, speculative articles, promises by Questlove that this would be the year and then “nah,” and project name changes (remember James River?) it barely seems possible that D’Angelo and The Vanguard, as he and his band now headline, have released a new project. Yet, here it is. And, whether you think it’s worth the criminally long wait or not will largely depend on whether you took my uncles’ side or my young fan side on that long car ride of neo-classic grooves and energetic debate.

You see, Black Messiah, musically picks right back up where Voodoo left off, only it’s even grittier, edgier, more thickly rock and funk infused in its mix, with a jagged edge at which the milky cream of Brown Sugar never even hinted. Yet, it feels true, like the album D’Angelo most likely always wanted to do and couldn’t. Outside of the epic “Another Life,” a near six-minute mid-tempo power ballad, there isn’t a single readily identifiable radio single on any of its dozen cuts, including the official single, “Sugah Daddy.” What is clear is that Black Messiah is an artist statement made by an artist whose dense and organic music sounds like nothing out today and who refused to compromise on any level in what he wanted to say and how he wanted to say it. Produced by D’Angelo with The Vanguard operating as a well-oiled jazz funk machine of all live instrumentation, this is the music he’s wanted to create, take it or leave it.

Arranged in intricate stack upon stack of musical instrumentation and vocal harmonies, there is much to take and little to leave behind from this album that demands its listeners’ rapt attention to receive the fullness of its offering. Melodically easier, but deceptively complex songs like “Another Life” and “Charade” briefly echo moments like “I’ll Stay,” “Playa Playa,” and “Send It On” from the D’Angelo catalog in their layered, slightly distorted harmonies and melancholic romance, though both are heavy-handed with their driving rock accents and melodramatic builds.

“Betray My Heart” incorporates some of the African percussion feels with a Latin jazz flow that is familiar to fans of Afro-Cuban jazz or “Spanish Joint” from Voodoo. References of “Chicken Grease” reverberate off of the funny, flirty “Sugah Daddy” to such a degree one could accuse it of being a brighter, more energized outtake of that Voodoo B-side. “Really Love” goes hard with the Spanish guitar and acoustic soul before unfolding into a sumptuously light swing of upright bass finger strolls and violin swirls that are as sexy as the hip sway of a woman walking away in a breezily hugging skirt. From the work whistles reminiscent of the dwarfs in Snow White to the light guitar and electric bass interplay on “The Door,” D’Angelo unlocks a playful side that feels good to hear from a man whose dark side we’ve been more privy to of late than his light. “The Door” is also one of the few songs whose lyric is fairly clear, revealing a good-humored irony when its faint threats are juxtaposed against the sun of the music. It’s as light as the unfocused tribal rock of “1000 Deaths” is repetitively dark and vaguely ritualistic in its mucky tone, feel, and orgiastic drive.

Plenty of it will remind listeners of Prince in his prime creatively daring years in the late ‘80s, when you felt there was more you hadn’t heard from him before. Yet, Black Messiah will also finally end any comparisons between D’Angelo and Marvin Gaye or Smokey Robinson, influences that no longer fit. Funk chorale parades like “Ain’t That Easy” and the near ragtime melody of “Back to the Future (Part II)” alleviate concerns that “similarly-veined” artists like Van Hunt or Bilal have eclipsed D’Angelo in the ensuing years—charges that now feel superfluous with an album in-hand so completely different than any such subsequently respected talents have produced so far. Vocally, while his unblemished tenor and feathery falsetto sounds as gorgeous, varied, and elastic as ever—still the love child of Al Green and George Clinton in his phrasing, D’Angelo’s diction is even worse than it’s ever been, leaving listeners reaching for liner notes that aren’t there, at least not for this digital release that hit our laps at midnight on iTunes. This will prove a bone of contention and considerable frustration for those still seeking a D’Angelo they can sing along to.

As with Voodoo, the saving grace is the music, some of which co-written by Questlove, James Gadson, and Pino Palladino, but mostly is D’Angelo’s alone. Intelligent, heavy on chord changes, and inspired transitions that play up the peerless musicianship of all involved, seamlessly floating from progressive jazz to ‘70s P-Funk to soulful rock and sometimes representing all of those genres at the same time in the same song, the music is quintessentially D’Angelo. These are the church meets rural roots meets club sophisticate sounds the multi-instrumentalist has tinkered with on his studio projects and discrete releases, including “I’ll Stay” and “BullSh*t” on RH Factor and soundtrack drops as his grease fire take on Prince’s “She’s Always In My Hair.” While produced and largely written by D’Angelo in its entirety, in Black Messiah’s liberal use of jazz trumpet and orchestrations, it’s impossible not to know D’Angelo’s trumpeter and long-time collaborator Roy Hargrove’s Grammy-award winning Havana and Hargrove’s two critically acclaimed RH Factor albums and not hear his influence on D’Angelo’s sound. The incorporation is welcome, giving the music a seriousness and weight that musicians will be sinking their teeth into for years to come.

Whether Black Messiah ever achieves the seminal status of Voodoo, an album that repeatedly made “Album of the Year” in 2000 and in the years since has been named anywhere from one of the “Top 100 Albums” to among the “Top 500 Albums” of all times by scores of magazines around the world, including Rolling Stones, remains to be seen. What is clear is that in the wait of the century, D’Angelo didn’t waste the time of those willing to devote the time to a serious work of sound art. Now will he disappoint the casual music listener who in the last 15 years has become accustomed to catchy, yet disposable singles and has had little asked of them by most of the musicians of the day? Well, that’s another thing entirely. Highly Recommended.