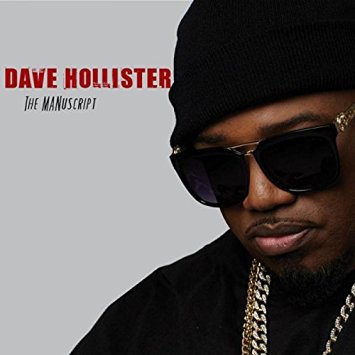 Looking back on your parents' generation, there's probably a few cultural touch points they would rather forget about. Vietnam for example, or admitting they wore butterfly collars and platform shoes while voting for Richard Nixon (*insert wince here*). But even without knowing them, I can practically guarantee that they wouldn't change a thing when it came to the music. Whether or not the grooves were funked up, slowed down or somewhere in between, male singers we're all about praise and passion for the ladies and working to preserve the love. The physical aspect was important -- no fans would be around to jam otherwise -- but the emphasis was more personalized than about, well, performance.

It takes a veteran of the present, one who's been influenced by that luxurious past, to bring back some of that old school sensibility but maintain the swagger and modern mindset of today, a feat Dave Hollister accomplishes with his latest CD,  The MANuscript.

A Blackstreet alumnus, Cali-based pastor and now performing in touring stage play adaptation of the 1990s film Love Jones, Dave Hollister's gospel-edged croon is one that we've kept in steady rotation since his unforgettable cameo on Tupac Shakur's 1988 smash, "Brenda's Got a Baby." Always one to keep his catalog authentic enough for his peers but tender enough for the ladies, who else could put together an aural guide on relationships? That's the tone MANuscript has set forth and has enjoyable ditties for all: executive produced and co-written by Hollister's longtime ace, Walter Milsap III, the top half is ladies first and the second half is for the fellas (and of course women get an extra shout-out number at the end).

Dave is all about bowing to the power of a woman in the piano-drenched, silken ballad "Definition Of A Woman" ("she'll make you bleed, she'll bring you to your knees.....take you from a boy and turn you into a man"); "Creation (H. E. R.)" describes the God-made perfection that he cherishes when he sees his lady ("He took a jar, caught two stars and those would be your eyes/then he took a little slice of heaven and his it between your thighs"); and "Shortage" goes to bat for the single ladies by calling on real men to show up and show out: "He's expecting submission,  playing games he needs to play his position....F. U.'s flying everywhere, [muted expletive] done hit the fan, 'I wish I never met you' is how she ends up here again."

Remember how the ladies kept Jazmine Sullivan's "Bust Your Windows" on repeat?  Well brace yourselves for the men to bump "Let Him," a warning delivered with bravado and a hint of the blues instructing ladies with wandering partners to love him or leave him: "Quit throwing dishes at him,  stop scratching up his paint/if you think that will make a n**** change, well it ain't. All you gonna do is make a man have to call the police/leave him or let him cheat in peace." BLOOP. "Barbershop" humorously describes encounters with both sexes in the way guys do, "for the ghetto stations," and the pipe-organ-infused "Blind" cautions brothers to keep their ladies happy since the consequences are a mutha: "You'd rather see hell than to see yourself moving out while he's moving in at the same damn time/look away,  look away Brother,  you'd rather go blind."

Breezier and less introspective than 2014's Chicago Winds, yet just as essential, The MANuscript is a look at what women offer to the world and how men should honor and receive those gifts ("Receipts," featuring Angie Stone, being an exception). We can't exactly dial it back to the lush era of blue-light basement soul, but having one of the most recognizable and resonant tenors in the game breaking it down can make fall that much sweeter to cuddle and connect in. Class is in session, your professor is Dave Hollister.... and y'all gon' learn today.  Highly Recommended.