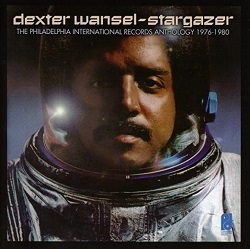 The name Dexter Wansel often comes up when talking about the music of artists associated with Philadelphia International Records. Wansel was a masterful keyboardist in his own right, and when he joined PIR in the mid 1970s, he wore artist, songwriter, composer, producer and arranger hats. Wansel earned songwriting credits on some of the best and most recognizable PIR projects in the 1970s and 80s.

The name Dexter Wansel often comes up when talking about the music of artists associated with Philadelphia International Records. Wansel was a masterful keyboardist in his own right, and when he joined PIR in the mid 1970s, he wore artist, songwriter, composer, producer and arranger hats. Wansel earned songwriting credits on some of the best and most recognizable PIR projects in the 1970s and 80s.

Wansel wrote songs for the Jacksons 1976 self-titled album and their 1977 follow up Going Places. He penned the only non- Gamble and Huff original on Lou Rawls’ Unmistakably Lou. The Jones Girls are the PIR act most closely associated with Wansel, who wrote multiple songs for that group (often with longtime writing partner, Cynthia Biggs), including “Knights Over Egypt.” He also co-wrote Patti LaBelle’s “If Only You Knew” (with Biggs and Gamble) and produced and co-wrote the famous title track for Phyllis Hyman’s 1986 masterpiece Living All Alone. Wansel added his keyboard wizardry to those and many other great PIR records, so his fingerprints are among those who crafted the smooth, lush and distinctive PIR sound.

All of that putting in work for other folks could obscure – let’s face it – often did obscure that Wansel was consequential solo artist in his own right. Look, if he did nothing but co-write the atmospherically sensual “The Sweetest Pain” for his 1979 album Time Is Slipping Away, that would be enough. That track, featuring the vocals of Jean Carne, remains a mainstay on quiet storm radio and was remade in 1986 by Loose Ends on their 1986 album Zagora. However, the Wansel compilation Stargazer: The Philadelphia International Recordings Anthology 1976-1980 shows that Wansel did much more.

Before I dive into this compilation’s content, let’s talk about the final frontier, which as any Trekkie celebrating 50 years of “Star Trek” knows, refers to space. Had Wansel not selected a career in music, he probably would have become an astronomer or perhaps an astronaut. During the period covered in this compilation, Wansel had a penchant for incorporating space themes into names of albums and the title of songs. Wansel released Life on Mars in 1976 and Voyager in 1978 – the year after NASA launched Voyager 1 and 2 to explore the outer solar system. Wansel’s interest in the stars was sparked by his evenings spent gazing into the heavens while growing up in Delaware.

Wansel’s interest in space, science and science fiction likely explains why some of the keyboard arrangements heard in many of the tracks on Stargazer. Those funkily spacey keyboards and synths heard particularly on the first CD of the two disc compilation make him more comparable to funk pioneers such as George Clinton and George Duke than those lush, smooth string filled arrangements that come to mind when people from that era think of PIR.

The influence of funk bands such as the Bar-Kays can be heard in track such as “All Night Long” and “Solutions” is a funky message song. “I’ll Never Forget” has the throbbing yet smooth bass lines, horns and strings that distinguished the best disco of that era. The album includes several slow cuts that are as well-crafted as “Sweetest Pain,” including “Holding On,” “A Million Miles From the Ground,” “I’m In Love,” and the title track to Wansel’s 1979 album, Time Is Slipping Away. Those gems can be heard in succession on disc two. Tracks such as the “Voyager” and “The Theme From The Planets” show that Wansel was an underrated creator of fusion.

It should not be surprising that an intellectually curious person such as Wansel would take his music in places that he might not have been able to move when writing, producing and playing for other PIR artists. Simply put, Stargazer shows that Dexter Wansel explored nearly every movement in R&B from 1976 to 1980 with the exception of rap. And, beyond his noted achievements helping others, the compilation reminds music fans of the incredible contributions of Dexter Wansel, the artist. Strongly Recommended.