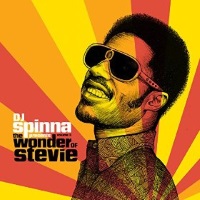 Everyone loves Stevie Wonder. He’s a living national treasure that keeps giving. Everyone especially loves classic Stevie, beginning roughly around 1971’s experimental Where I’m Coming From and ending at either 1987’s wildly uneven Characters or 1991’s commercial jingle of Jungle Fever, depending on your tastes. While Wonder has classics both before and after this period, the golden era of ‘70s and ‘80s Wonder is the stuff cover albums are made of.

Everyone loves Stevie Wonder. He’s a living national treasure that keeps giving. Everyone especially loves classic Stevie, beginning roughly around 1971’s experimental Where I’m Coming From and ending at either 1987’s wildly uneven Characters or 1991’s commercial jingle of Jungle Fever, depending on your tastes. While Wonder has classics both before and after this period, the golden era of ‘70s and ‘80s Wonder is the stuff cover albums are made of.

With that in mind, in 2003, DJ Spinna and Bobbito famously excavated many of those covers and Wonder-penned originals performed by other artists in what is now its own must-have DJ staple, The Wonder of Stevie, Vol. 1. A lesser known, but no less vibrant The Wonder of Stevie: Melody Man (Further Forays Into The Stevie Songbook) was released a year later. While so much source material globally exists that one can literally take this compilation concept into The Wonder of Stevie, Vol. 25 and still not hit the same performance twice, arguably the best and brightest takes were largely uncovered in the 2003 and ’04 sets.

This new, third set by DJ Spinna curating solo digs even deeper in the crates to mine versions that range from Vegas pastiche (US Atlantic Fleet Navy Show Band) to some of the Blackety Blackest funk versions of Stevie Wonder out here, and that’s just by Edgar Winter’s White Trash (yes, that’s their actual name).  Whether this set is worth the spotlighting of yet another whopping 20 finds is largely determined by just how much you want to hear Wonder done by competent, sometimes even exciting acts, but rarely superior to the more beloved versions already revealed.

Throughout Vol. 3, the selected voices are heavier, earthier, grittier, and funkier than the usual take on Wonder. Like the East St. Louis Gospelettes on “Have A Talk With God,” the performers here are largely the reliable Sunday singers who can be depended on to consistently deliver a joyful noise, but only occasionally rock you out of your seat with the spirit.

With rare exceptions, like the puppy love of The Jackson 5’s “Buttercup” (better covered by Carl Anderson) or the gleaming surfaces of The Foreign Exchange’s “If She Breaks Your Heart” from Wonder’s Jungle Fever Soundtrack, the bulk of these covers are the lovechildren of the blues, junkyard funk, and Southern Soul. In this way, Spinna’s curation makes an argument for this collection’s existence, the reveal of a wholly different shade of what’s possible with Wonder’s material. Even the rarely noticed musicianship of the Jackson 5 on “Buttercup” closes with a more intricate jam session than the brothers are often given credit for being able to pull off (ignore MJ’s leads, if you can, and just listen to how these brothers go!).

Where the project most thrills are in the raw, near guttural, go-for-broke takes on Wonder. The blues church revival that is FBI’s “Keep On Running” deserves to be considered a swamp-drenched classic. Edgar Winter’s White Trash wah-wah rock ‘n’ soul infused “Do Yourself A Favour” is Grade A junkyard funk. Their howling, dirtied up take of “Do Yourself A Favour” has all the fire and thunder that even the original by Wonder only suggests. Speaking of howling funk, few can outdo David Ruffin channeling early Ray Charles on the original “Make My Water Boil” whose sing-songy pop hook almost feels like it comes from another song entirely. Rocking the pews, Billy Preston on organ and vocals appears to believe he’s taking a love offering at the end of the original “It’s My Pleasure,” boasting Wonder on harmonica.

It’s not all church or garage blues ‘n’ soul on Vol. 3. Afro-Latin jazz rhythms also get some serious play. Similar to the José Feliciano and Sergio Mendes and Brasil’s take on Wonder on Vol. 1, Brazilian influences take center stage with Black Sugar’s “Don’t You Worry About a Thing,” Sunlightsquare’s somewhat dull, jazzy modernization of “Pastime Paradise,” and Reel People’s Tony Momrelle slaying a bossa nova take of “Golden Lady.” Sweet seventies soul also gets some love through Betty Everett’s 1975 heart-shaped “Just A Little Piece of You,” Tony Sherman’s 1977 near note faithful “As,” and BJ Thomas’s 1976 country-tinged “Happier Than The Morning Sun.” Easy listens all.

In a collection of solid, if not always exceptional vocal performances, only Jrod Indigo’s overwrought “Go Home (Nouveau Ame Version) feels wildly out of place (Sunlightsquare’s “Pastime Paradise” is a close second), which isn’t bad for nearly two hours of continuous music. Even on songs where the singer is merely doing his or her job, the musicianship found on nearly every track will make you wish every one of these supporting masters of old were now teaching a music program in somebody’s urban school, if only to save this level of musicianship for generations to come.

Of course, what holds these disparate sounds all together are Stevie Wonder’s songs. His material has become such a part of our national musical fabric that we sometimes err to forget just how amazing and revolutionary these compositions are. That is, until a compilation likes this come along and reminds you that Stevie Wonder makes everyone just sound better, makes every competent church, funk, or blues singer a star. And, maybe that’s the point, even for a Vol. 25.  Recommended.